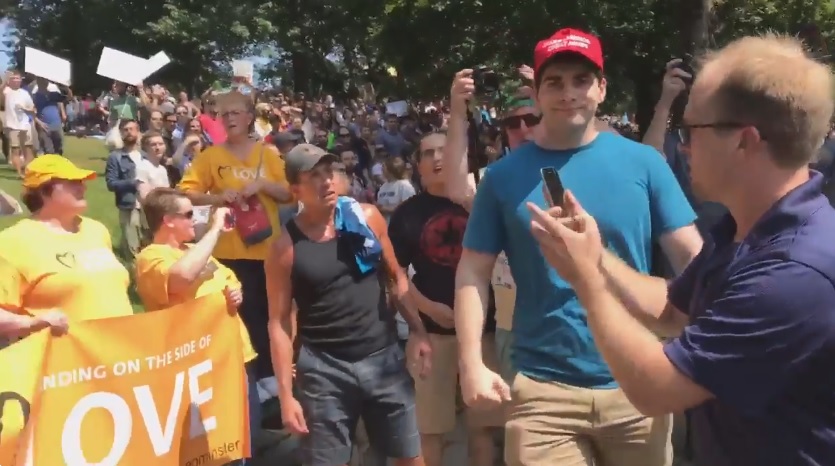 A Trump supporter wearing a red Make America Great Again hat was surrounded by a mob of what the media’s been calling “peaceful protesters” and punched in the face outside a free speech rally in Boston on Saturday.

Local news channel WHDH’s Sharman Sacchetti says the man had to be escorted out of the common area after being punched in the face, though she says it was “unclear what prompted” the assault.

Man escorted out of Common after witness say he was apparently punched in the face. Wearing a red Trump hat – unclear what prompted pic.twitter.com/2KaB6QSsqA

A second man was also punched in the face and knocked out by peaceful protesters:

Another older woman was violently dragged on the ground after another “peaceful protester” tried to tear her American flag out of her hands and then dragged her on the ground.

The beginning of this video shows two more conservatives getting peacefully harassed and robbed:

Boston police requested the peaceful protesters not throw bottles of urine and other harmful projectiles at their officers:

#BPD is asking individuals to refrain from throwing urine, bottles and other harmful projectiles at our officers.

They also got into peaceful clashes with the peaceful protesters:

One quintessential Bostonian was escorted from the event for wearing a “Stop White Genocide” t-shirt:

President Trump weighed in on the event on Twitter:

Looks like many anti-police agitators in Boston. Police are looking tough and smart! Thank you.

As did Julian Assange:

#Boston: 20k protest against "free speech" today. GOP controls gov+congress+supreme+cops. Give them the only thing you have left? Smart.

Despite the peaceful nature of the counter-protesters, the Boston free speech rally organizers decided they had to cancel the event after most speakers dropped out due to peaceful threats of violence.