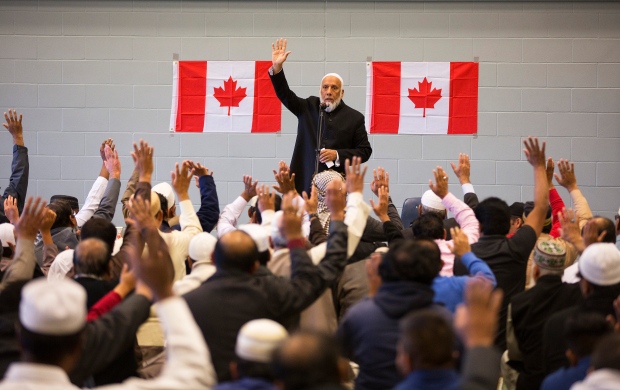 Saint-Bernard-de-Lacolle. 1,477 people live in this little corner of Quebec with its apple orchards, elderberry fields and small wineries. But now 400 migrants can cross the border in a single day.

On the other side of the border is New York. There the language is English. In Saint-Bernard-de-Lacolle, the language of choice is French. But these days you’re a more likely to hear Arabic, Urdu or Haitian French being spoken here as Roxham Road fills with clots of migrants scampering out of America. 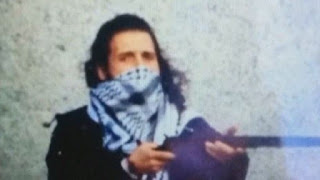 They’re not the leftist American celebs who threaten to leave for Canada if their side doesn’t win the election. Instead they’re the illegal and dubiously legal who got the message from President Trump.

The Syrians, or anyone claiming to be, are coming. So are the Sudanese, Somalis and Haitians. This is an informal border crossing and so the rules that might protect Canada from this horde don’t apply. Quebec has become the weakest link in the Canadian border with the vast majority of border migrants invading the “True North” through vulnerable points like the dead end of Roxham Road.

The same thing is happening in Emerson, a town of 689 people named after Ralph Waldo Emerson, near Minnesota whose Somali settler population is invading and victimizing this peaceful community. At night Somalis can be seen walking up to Emerson to take advantage of a new country and her people.

In a town where once no one locked their doors, locals now check their bolts and turn out the lights. And then they wake up to the nightmare of migrant mobs pounding on their doors and peering through their windows in the middle of the night.

“They banged pretty hard, then ‘ring ring ring’ the doorbell,” a mother of two young girls said. “It was scary.”

Muhammad, a Somali migrant, heard that President Trump had deported a bunch of Somali asylum seekers. And so he headed for Emerson with ten others. He claims he no longer feels secure in America. And he wants to bring the rest of his family along.

Unfortunately, Muhammad and all those like him feel all too secure invading Canada.

At Hemmingford, a Quebec town near New York with less than 1,000 people, Syrians, Yemenis, Bangladeshis, Sudanese and Turks swarm to get across. Women in burkas and hijabs ignore the commands to stop. Before they used to furtively cross the border at night. Now they openly march across it in broad daylight. They know that the Canadian authorities can’t do anything to stop them.

“They heard Justin Trudeau on the radio saying Canada would continue to welcome people being excluded under Trump’s policies and they took it literally, and they came,” a lawyer for a Syrian migrant clan said.

Just as migrants had reacted to Obama’s signal to come, they are reacting to Trump’s signal by going.

The Border Patrol watches as a horde of illegal aliens from Syria, Haiti and anywhere else head for Trudeauland. “Our mission isn’t to prevent people from leaving,” an operator is quoted as saying.

There are plenty of Haitians heading down Roxham Road after the Department of Homeland Security told the 58,706 Haitians in the Temporary Protected Status program to move along. TPS is one of those gimmicks that the government uses to boost immigration in a backhanded fashion.

Seven years ago, Haiti suffered an earthquake. Obama’s DHS announced that there would be no more deportations. Haitian illegal aliens instantly and magically became “quake refugees” even though they had been living in America when the quake happened. Trump’s DHS warned that the free ride was over.

And so it’s on to Canada.

The number of Mountie interceptions in Quebec tripled since Trump took office. The Mounties may always get their man, but they’re getting far too many of them these days. More than they can handle.

“Our agents are in a state of crisis right now,” the president of the Customs and Immigration Union said.

But they’re the victims of a broken Trudeau regime that puts migrants first and Canadians last. And the Mounties have been turned into a delivery service for bringing illegals and their luggage to Canada. A hundred soldiers have been dispatched, not to stop the illegals, but to put up housing for them.

“Our role is limited to putting up tents with a rigid floor and installing heating and lighting,” Major Yves Desbiens said. When that’s done, some members of the Canadian Amy will stay on as the maintenance crew for the invaders. So much for the Army’s proud motto, ‘We stand on guard for thee.’

Who stands on guard for Saint-Bernard-de-Lacolle, for Hemmingford and Emerson? And for Canada?

In days gone by, armies kept invaders out of a country instead of accommodating them. But under Prime Minister Trudeau, the Canadian military is there to facilitate the invasion of Canada.

The arrests are a formality. The invading horde ignores the signs and warnings by officers to turn back. They’re arrested, given food and put on a bus along with their luggage to Montreal. There they can expect free health care and a $650 check. And clamorous demands for social services and housing.

The Olympic Stadium opened in more hopeful times for the ’76 Summer Olympics. These days “The Big Owe”, the stadium that nearly broke Montreal houses an even bigger and more expensive disaster. The $1.5 billion Olympic debt was paid off a decade ago after a long thirty years. Now the doughnut shaped arena swarms with freeloading migrants sleeping, eating and hosing off in the team locker showers.

The stadium plan comes down to Montreal Mayor Denis Coderre. Coderre had blamed the migrant swarm on President Trump’s immigration policies. But it’s the fault of Trudeau and Coderre’s migration policies. If your neighbor locks his door and you don’t, is it his fault if squatters break into your house?

“The City of Montreal welcomes Haitian refugees,” Coderre had tweeted. “You can count on our full collaboration.”

Collaboration was all too appropriate of a word.

Quebec Immigration Minister Kathleen Weil insisted that everything was fine. “We can handle it. There is not one ministry that is concerned about that — the federal government is not concerned about it.”

And what is there to be concerned about? Except that the Canadian crisis keeps getting worse.

In July, 50 people were arriving a day. Now it’s between 250 to 300. At Saint-Bernard-de-Lacolle, there was a 1000% increase in under two months. 700 have been crammed into the Big Owe. And Quebec will be on the hook for them even longer than for the stadium they’re living in. It will always owe them.

“There is no work for people in Quebec,” a native resident complained. “There are no good jobs and we don’t have money for the old people.”

Meanwhile Syrian migrants have become a burden on Montreal schools which have been forced to hire specialized teachers. While back in Saint-Bernard-de-Lacolle, lunch had to be provided for 900 migrants. In Emerson, government officials wanted to house migrants in the town’s ice skating ring.

Trudeau’s government has dismissed the idea that there might be a problem. And for good reason.

The door to Canada was pried open from the inside. And only Canadians can take it out of Trudeau and Hussen’s hands and close it again. Under the conservative Harper government, Canada had sane immigration policies while America was suffering under the scourge of Obama’s illegal border surge. Now the governments have changed and the surge has shifted with them.

Canada’s crisis reminds us that illegal immigration is not an inescapable problem. It’s a product of government policies. We can solve all. All it takes is leaders with the political will to do it.

Borders exist to protect a country. We see that in Europe. We see it in America and Canada. And leaders who refuse to protect the border are really refusing to protect the nation that it represents.