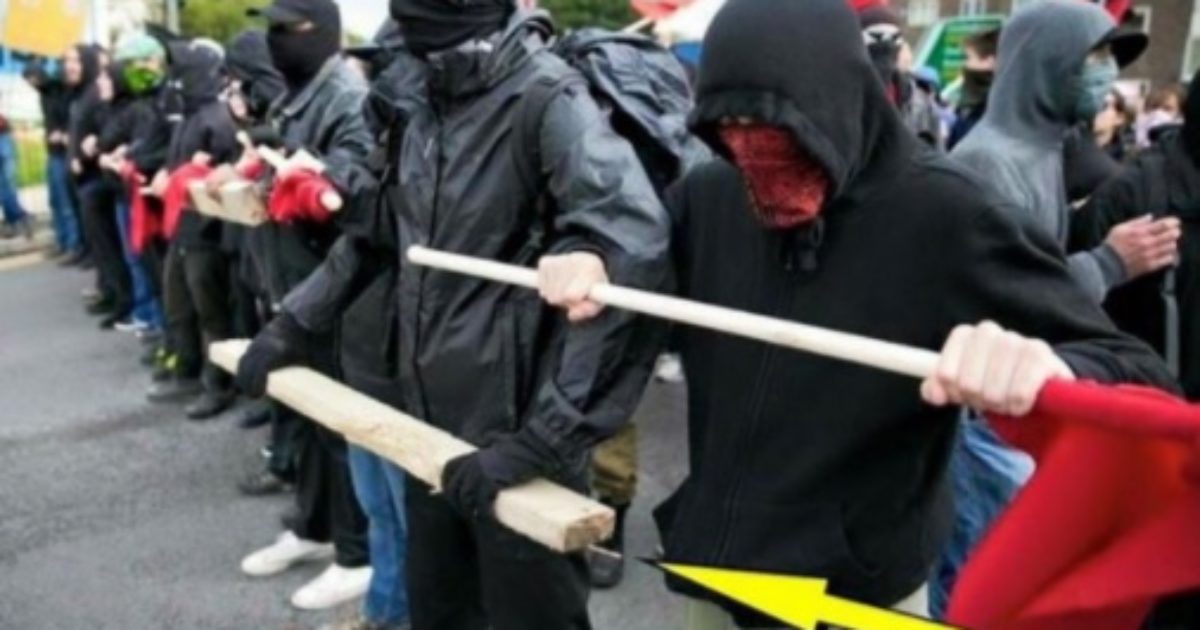 Well, Democrats? When are you going to stand up and denounce this mayhem?

I’m talking about the protests taking place this weekend all across the country, including Boston, Massachusetts.

Best selling author and founder and executive director of TPUSA, Charlie Kirk tweeted out pictures of the protests Saturday and he is echoing the same sentiments of my question above.

Nails on end of sticks for radical leftist rioters in Boston.

Who can possibly say they are there for peace? pic.twitter.com/AoCJkEnbdL

“Nails on end of sticks for radical leftist rioters in Boston,” Kirk tweeted. “Who can possibly say they are there for peace?”

Twitter is censoring the picture, but I grabbed a screenshot.

I agree, but bring a gun and have it holstered on your side and these Nazis will be calling for your weapons.

If that was not enough, you then have this open endorsement of murdering police officers.

The radical left in Boston pic.twitter.com/IhFfrU33Vb

Still waiting for the media and the Democrat party to denounce this form of radicalism in their ranks pic.twitter.com/SinZkikgDG

While there are certainly issues that need to be dealt with involving police officers who act criminally and enforce pretended legislation, calling or endorsing their murder is the mindset of today’s young Marxists in America.

It’s funny that these people are so courageous that they will not even show their faces, isn’t it? That makes them cowards.

Will the media show this form of hatred as well?

Does the left denounce Antifa? pic.twitter.com/lVFd1ELpxD

“Will the media show this form of hatred as well?” Kirk asked. “We conservatives denounce Naziism, KKK, and racism. Does the left denounce Antifa?”

The answer is, never. They cannot disown their own people, Mr. Kirk.

They will just attack you for what they are guilty of, just like good little Alinsky Communists.

The photo above demonstrates that this is not about free speech, it’s about inciting a riot to which Congress, if they acted according to the Constitution, would be calling up the militia to deal with this.

Vandalizing and destroying property that is not yours is a crime, but it gets worse.

One one woman who was actually peacefully protesting these Marxists and simply holding up an American flag was assaulted and dragged by one of these criminals.

Not only that, but these people were not intent on engaging in free speech, but harassed, screamed at and insulted a Trump supporter as he walked through their midst.

So, where has all of this come from? I’ll tell you.

Public indoctrination centers have incubated this behavior by their godless curriculum.

They no longer appeal to young people to learn in order to glorify God in their endeavors.

They appeal to the base human nature to indulge themselves, to look out for number one and to embrace that which God abhors and calls an abomination.

And if you are a Christian and have sent your children to these centers of Marxist teachings, then shame on you. You have been a willing, maybe ignorant, participant in all of this.

As Scott Buss recently pointed out, just by sending out children to these halls of Darwinism, we are teaching them all sorts of evil.

Furthermore, Charlie Kirk spoke out about “higher education” and how it has not been about learning, but about indoctrination into totalitarianism and intolerance.

President Trump has made it clear that there are issues on both sides of the White/Black power struggle that are to be condemned, and rightly so.

However, the root problem isn’t about skin color. It’s about the depraved hearts of men.

As I pointed out before and encourage parents, including those who are not Christians, to do all the time, start now to teach your own children. You can do it for free by clicking here.

You might say, well that was Old Testament (as though that matters). However, the New Testament is explicit. In Ephesians 6:1-4 we read:

Children, obey your parents in the Lord, for this is right. Honor your father and mother,” which is the first commandment with promise: “that it may be well with you and you may live long on the earth. And you, fathers, do not provoke your children to wrath, but bring them up in the training and admonition of the Lord.”

If we don’t teach our children to respect the authority that God has put them under, namely mother and father, how can we ever expect them to respect any other lawful authority? We simply can’t expect it, and that’s what we are seeing today.

We see the problems we’ve brought about by not following God’s commands in the area of education, which results in not following His commands in all other areas. It’s time we prove Him for who He is and repent and call on Him to heal out land.

Let me encourage you to read a couple of books and then act accordingly.

. See what one America warned would occur if those in power during the 19th century were allowed to force public education on the States, and take a look around you at how his predictions have been astoundingly accurate. The second book is titled Restoring America One County At A Time

. The first step mentioned is getting back to home and private education, but it gives an eye-opening account of the history of education in America and how we used to be the most literate country on the planet.

After all, if you are waiting on Trump or Congress to right these wrongs, you are looking to the wrong place and people to accomplish that. We the People must learn once again to govern ourselves, and that begins at home.