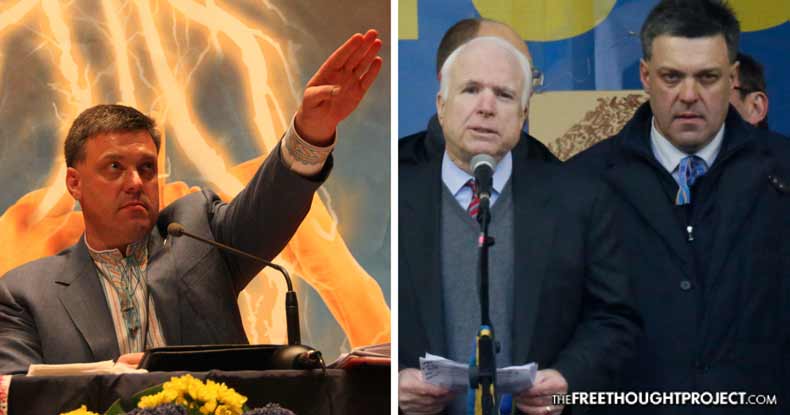 When former Republican Presidential Nominee John McCain is mentioned in the media, he is typically painted in a good light—an elderly senator and war hero battling brain cancer who has devoted the rest of his life to fighting for government healthcare and the removal of a tyrannical dictator in Syria.

McCain added even more fuel to his fire on Tuesday when he joined the mainstream media in condemning President Trump for his response to violent clashes in Charlottesville, Virginia. “There’s no moral equivalency between racists & Americans standing up to defy hate & bigotry,” McCain wrote on Twitter. “The President of the United States should say so.”

There's no moral equivalency between racists & Americans standing up to defy hate& bigotry. The President of the United States should say so

McCain’s words were quoted by a number of mainstream outlets, from CNBC to The Hill, which reportedthat the Arizona Senator was simply “pressing President Trump to make clear that there is not a ‘moral equivalency’ between white nationalists and the counterdemonstrators that turned out in Charlottesville.”

However, there are a few major issues with McCain’s statement. Many of the counterdemonstrators, or “Americans standing up to defy hate and bigotry,” as McCain called them, were affiliated with the group “Antifa.” Although the group’s name stands for “Anti-Fascist,” some of its members do the opposite, and the method of “seeking peace through violence” has been evident at a number of violent rallies and protests across the U.S. following Trump’s inauguration in January.

There is also another factor that should be taken into account as McCain attempts to take the moral high ground and the media cheers him on—his family history. According to a documentary called “Finding Your Roots” from Weta Interactive Media, not only does his family have connections to “hate and bigotry,” McCain’s great-great-grandfather served under the first Grand Wizard of the Ku Klux Klan.

“We then discovered that his Calvary unit had been tapped for a mission by none other than General Nathan Bedford Forrest, a brilliant, but brutal commander, often remembered for what he did after the war as the first Grand Wizard of the Ku Klux Klan,” Historian Henry Louis Gates, Jr. said.

According to the documentary, William Alexander McCain was also a deserter, leaving his division in the Mississippi Calvary during the Civil War, and he also became a Prisoner of War. But there is one more trait that has been passed down through generations—the McCain family’s support for neo-Nazis.

“We are here to support your just cause, the sovereign right of Ukraine to determine its own destiny freely and independently. And the destiny you seek lies in Europe,” John McCain told groups of neo-Nazi protesters at a rally in Ukraine in December 2013.

McCain claimed that his support for these protesters stemmed from the fact that he was trying “to bring about a peaceful transition here, that would stop the violence and give the Ukrainian people what they, unfortunately, have not had, with different revolutions that have taken place—a real society.”

However, McCain’s true motive was revealed when he was asked about how Russia and his mortal enemy President Vladimir Putin were influencing the conflict. “This is the beginning of Russia, right here in Kiev,” McCain said. “So Putin views it as most highly important and he has put pressure on Ukrainians—the price of energy, different kinds of activities. The word is very clear that he has made certain threats.”

While John McCain was quick to condemn protesters for their “hate and bigotry” this week, and while the mainstream media was quick to applaud him for his efforts, they both seem to be forgetting the all-too-important context, which serves as a reminder that McCain only condemns Neo-Nazism when it fits his political agenda.