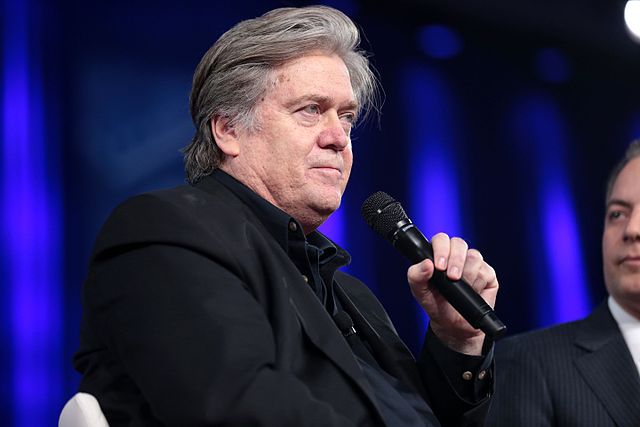 According to a new report, Stephen Bannon is examining whether to start a right-wing competitor to Fox News.

Unshaven and working from home in cargo shorts as he moves into “Bannon the Barbarian” mode, Steve Bannon is thinking bigger than Breitbart.

Axios’ Jonathan Swan hears Bannon has told friends he sees a massive opening to the right of Fox News, raising the possibility that he’s going to start a network.

It needs to be on TV. TV can reach older voters and gives your internet broadcasts more panache.

Fox’s James Murdoch, one of Rupert Murdoch’s Trump-hating sons, just donated $1 million to the ADL. Tucker Carlson meanwhile is standing up for the free speech rights of The Daily Stormer, despite noting it’ll get him on an SPLC hate list.

It’s just a matter of time before Carlson gets fired and Sean Hannity as well. Put them on a new cable network where Alex Jones and other new right people are actually allowed on and I guarantee it would get huge ratings.

Every cable news station is now a bunch of catty women sitting around dressed like pageant queens whining about everything Trump does. It’s just flat out bad television.

I just watched two CNN interviews with the great Corey Stewart, who every Virginian should campaign for and vote for, and even though he was great, it was painful to watch. The CNN anchors literally just sit around nagging him and refuse to engage him on any of his questions. Again, it’s just bad TV.

There needs to be a new network to reflect the new media landscape. Fox News could have fit the bill and crowded out such a network if they wanted to, but now they’re further to the left than MSNBC.