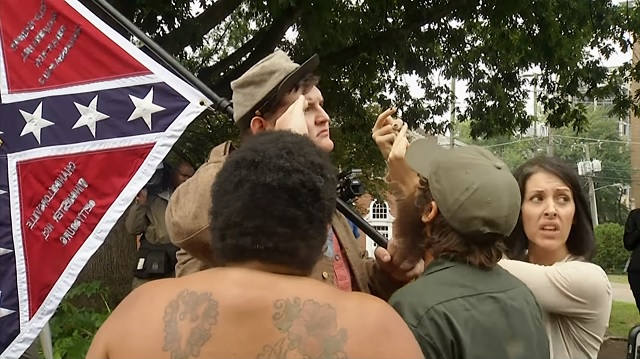 Silently saluting the monument of confederate General Robert E Lee is enough to get you kicked out of Florida’s Pensacola Christian College.

Student Allen Armentrout traveled to Charlottesville on Tuesday to silently protest in favor of preserving his confederate heritage.

He was greeted by a barrage of hatred from rabid leftists who screamed he was a “terrorist” and a “racist.”

On Thursday, he was kicked out of his small Christian college.

On Thursday, [Allen Armentrout] found out the staff of Pensacola Christian College decided to terminate his enrollment.

“I have been released from my school and will be unable to return to college to finish my senior year,” said Armentrout. “I’m processing this and making adjustments to my life to compensate for this scrutiny.”

Armentrout says getting the news about his removal from the school has been gut-wrenching.

“I’m a born-again Christian and I believe this wrench has hindered my attempt to serve the Lord. I believe a Christian institution should support patriotic individuals who want to stand for American tradition and beliefs. It really hurts me a lot when you try to do what’s right and you get attacked,” said Armentrout.

Armentrout said he is desperately seeking a college that would welcome him after his choice to stand in front of the statue.

“At the college I was attending, my contract provided my fourth year free if I paid my payments on time, which I worked very hard to do,” said Armentrout. “Now, essentially, if I want to complete my undergrad, I’ll have to pay, which I don’t have the resources to pay for a fourth year.”

Armentrout declined to comment any further to WXII 12 News, only saying he is unavailable until he’s able to “sort out the chaos” in his life “caused by those who wish to destroy Southern heritage.”

The cowardly college administrators wouldn’t even give an explanation for why they kicked him out:

WXII 12 News reached out to Pensacola Christian College in attemps [sic] to clarify why Armentrout was removed.

“We do not share any private information about the students. Our hearts certainly go out to people suffering there and we are thinking about them from afar,” said Amy Glenn, the college’s chief communication officer.

I’m sure if he was on the other side of the protest and screaming vile insults and issuing threats they would have given him an award.

Many Christian colleges these days are hyper-liberal social justice advocacy organizations which have nothing to do with Christianity. Pensacola Christian College needs to get the Mizzou treatment.