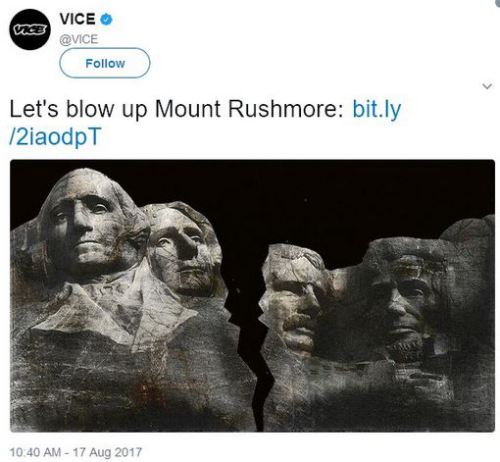 On his nationally-syndicated radio show on Friday, August 18, 2017, Rush Limbaugh sounded the warning that America is on the verge of civil war:

“America is under attack from within. Our culture, our history, our founding are under the most direct assault I have seen in my life. And I’m sure it’s the same with you. We haven’t seen anything like this. You might even get away with saying that we are on the cusp of a second civil war. Some of you might say that we are already into it, that it has already begun. However you characterize it, though, we are under attack from within. And it’s being bought and paid for by people from outside America, in addition to inside.

But a civil war waged by the Left is already upon us, with acts of domestic terrorism in acts and words.

An Antifa website, It’s Going Down, is calling for violence against all supporters of President Trump and capitalists. (If the website is taken down, here’s the archived link: http://archive.is/vtPZL)

There are downloadable instructions on “insurrectionary mass resistance and refusal” and militant tactics against employers and law enforcement. (See DCG’s “Antifa website calls for violence against Trump supporters“)

Saturday, 40,000 Leftists converged on Boston to “counter-demonstrate” against a peaceful rally for free speech. After police declared the official end of the rally, Antifa thugs assaulted whites and clashed with riot police.

CNN describes Sherelle Smith, the sister of an armed black man shot dead by Milwaukee police on August 12 as “calling for peace” and edited out her calls for calls for rioters to burn down the suburbs (Washington Times). Smith yelled:

A graffiti sign in Huntington Station, NY, calls for “RAPE AND KILL ALL WHITE PEOPLE”

If you do nothing about the Left’s domestic terrorism in words and deeds, then you are part of the problem. Don’t complain when the violence is at your door.

What you can do:

(1) Report the threats of terrorism:

Report the Antifa website It’s Going Down, Sherelle Smith, Vice magazine, and other domestic terrorists to:

(2) Report threats of assassination to the Secret Service:

Demand that they denounce the Left’s domestic terrorism: http://www.usa.gov/Contact/Elected.shtml