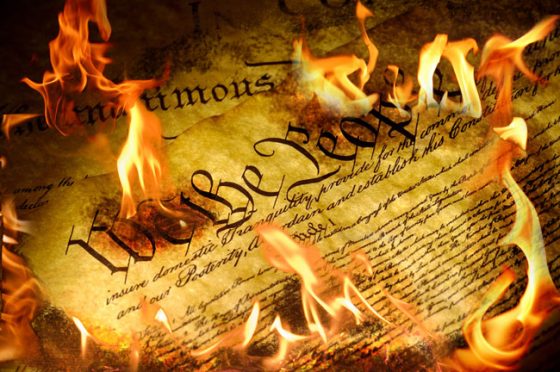 Democrats have been wanting to use the 25th amendment to remove the elected president of the United States. Since Donald Trump’s election, those on the left have focused more on Trump’s removal than anything else -except maybe Russia.

However, since the events in Charlottesville, this narrative has exploded inside the media. The talking heads have been creating one story after the next calling for the removal of the President under the terms of the 25th amendment. Section 4 of the 25th amendment to the Constitution states:

*Zerohedge craftily put together a collage of headlines regarding this very section of the Constitution, which you can view in its entirety here.

There have been many headlines demanding and even a few begging that Donald Trump be removed in this manner over the past week, but mentions of the 25th amendment began almost immediately after leftists saw his name scroll across the bottom of their TV back in November declaring him the winner of the 2016 presidential election. It’s almost cute in a juvenile way, that the left cares so much about the Constitution now, but didn’t give a half a thought to the numerous times Barack Obama crossed the obvious lines laid out in that piece of paper.

The Washington Post’s Carl Bernstein even admitted to using propagandato try to make this avenue a possibility. He said it should be the primary goal of the media to get Republicans on the record calling for President Trump’s removal, emphatically believing the President was mentally ill. (Bernstein’s analysis begins at 4:40 mark if you wish to skip the long-winded introduction.) This all happened Sunday on CNN.

In summary, Trump could not win the election — because he was a joke. Trump ended up winning, but only thanks to Russian hackers. Since Trump was helped by Russian hackers, he must’ve colluded with them. If Trump colluded with them, he should be impeached (cue Muller). Since the Mueller investigation is taking forever, let’s remove him for daring to suggest that ANTIFA thugs, who regularly beat up people for exercising free speech, were bad actors.

Notice how Stelter posed his multi-tiered question, leading with ‘Is Trump a racist?’ Get the audience to first agree to something they’ve been programmed to believe, and then the rest will fall into place. –Zerohedge

The deep state is winning.

The deep state and the media propaganda machine is indeed, winning.