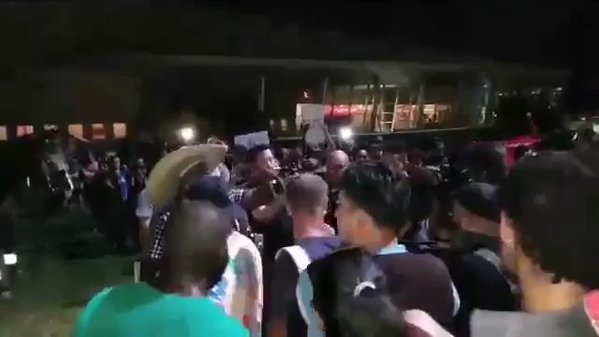 Much of the ugliness we see on the Left today is embodied in groups like Black Lives Matter and ANTIFA. Both groups think they are oppressed, both are obsessed with identity politics, and both are steeped in Marxist ideologies. You’d think that they would get along just fine but that’s not the case. People who have their identities wrapped up in victimhood are narcissistic by nature. They want the spotlight at all times, and can’t stand to see someone else hog it. So it was probably just a matter of time before these two groups clashed.

At a recent protest a member of BLM confronted an ANTIFA member, and challenged him to take off his mask. The crowd of ANTIFA supporters began chanting “He’s a cop!” at the black man. It wasn’t long before the masked ANTIFA thug got in his face, and threw a punch.

In the Left there is always ongoing competition between different minorities, sexual identities, and political groups who feel that they are more aggrieved than anyone else, and thus more worthy of public attention and sympathy. It may not look like it at first glance, but what you just witnessed was a fight between two of those groups over who deserves the spotlight. It was only a matter of time before the Left started to eat its own.