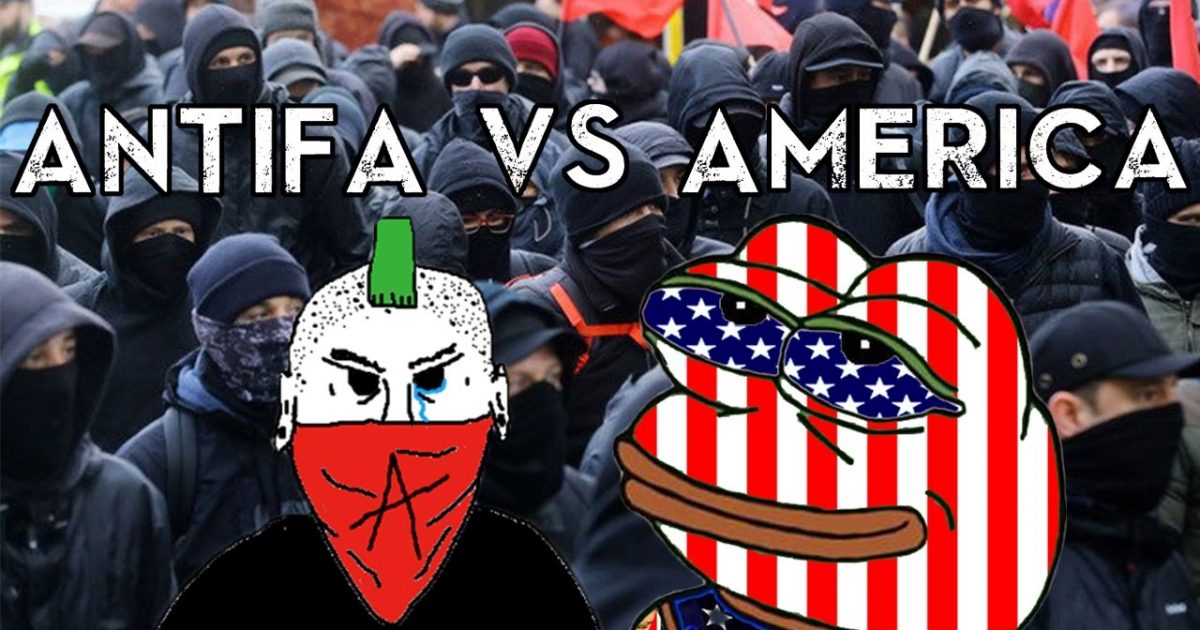 We see the headlines all over the news about the “Alt-Right,” but few show the more violent “Alt-Left” that has destroyed property and attacked police.

Let’s be very clear, both sides are not in favor of a Free United States.

In this article, we will expose the Antifa group first since few, if any, seem willing to investigate their background or why they act like they do. I also have to bring back another article I wrote which seems to connect this group with the ideology of our former President, Barack Hussein Obama. That article seems to show where Antifa may have come from.

Yes, Obama had set up what is now going on in Charlottesville, and everywhere they remove monuments that, in all cases, were not bothering anyone until the “Alt-Left” found out the Russian story was going to fail.

But it does not end there. These groups, from both sides, are out to destroy our nation. Antifa is based upon a Communist theory and, in most cases, based upon a pure Nazi attitude. How can we make this statement? Let me show you.

First, from Discover The Networks:

In each of the aforementioned demonstrations and riots, the major perpetrators of violence were members of a movement calling itself “Antifa” – a shortened form of the term “Antifacist.” According to organizers from the “anti-fascist research and news” website of a New York-based Antifa chapter: “Antifa combines radical left-wing and anarchist politics, revulsion at racists, sexists, homophobes, anti-Semites, and Islamophobes, with the international anti-fascist culture of taking the streets and physically confronting the brownshirts of white supremacy, whoever they may be.”

At its heart, the Antifa movement is in fact a communist phenomenon whose adherents – consisting predominantly of upper-middle-class white males – believe that conservatives, particularly those who supported Donald Trump in the 2016 U.S. presidential election, are the moral equivalent of Nazis and are therefore not entitled to the free-speech protections guaranteed by the First Amendment. Moreover, as the New York Antifa group indicated, the movement has a strong element of anarchism as well; thus its members are commonly seen waving the red and black flag of anarcho-communism.

Today, Antifa has active cells in a number of nations across the globe, most notably the U.S., Canada, Germany, the Netherlands, Norway, Sweden, France, and the Czech Republic.”

Anitfa is a group of “Anarchists” that do not care about anything else but destroying a legally elected official and tearing down monuments that have not hurt anyone for over 100 years; and all of a sudden, because of a chosen few, those statues have become the hate of many even though many of them have no idea of the truth about the monuments.

“Henry Hughes, 61, dressed in jeans, a flannel shirt and a North Cascades National Park hat, held a jug to collect money for those arrested. A copy editor for a transcription company who lives in Marblemount, Wash., he said that although he was blocking entrances Friday and was nowhere near the torched limousine, he didn’t object to the destruction.

“Property damage is not violence,” he said. “Violence against other people is violence.”

This shows the attitude of this individual and reflects the entire ideology of the Antifa movement.

Just how long will the honest, free people of the United States remain silent and these thugs do this?

They will fight until all our history except for their single-sided revised history is allowed.

Just take a look around the nation. We can see this group asking for the removal of all monuments of former slave holders, and if they succeed with that, it will become all white people because they are being taught that white people are evil.

Yes, it will not stop unless “WE THE PEOPLE” take a stand now and demand that it stop and to replace all the monuments that have been taken down.

It is up to the “Silent Majority” to stand up demand, “STOP IT!”

“Antifa, which stands for “anti-fascist action,” is a network of loosely affiliated far-left anarchist and communist groups that orchestrate violent protests and attacks on populists, conservatives, and anyone else its members deem to be “fascists” or “Nazis.”

“Anyone who tries to hold any sort of right-wing event literally gets beat up by militant communists in the street.”

Antifa was formed originally in Germany in the 1980s, its members taking the name of the communist paramilitary groups that engaged the Nazis in street-fighting in the 1930s. It now has active cells across the world, including in Germany, the U.S., Canada, the Netherlands, Norway, Sweden, Czechia, and France.

“Anyone who tries to hold any sort of right-wing event literally gets beat up by militant communists in the street,” said independent journalist Lauren Southern, who was present at one of the pro-Trump Berkeley rallies, in a video taken immediately following the violence.”

Once again, this group takes its ideology from a Communist paramilitary group that fought the Nazis in the 1930s.

That is perhaps the worst thing that this lawless group can state, but they want to be seen and will not stop until they have destroyed our great nation and turned it backwards with only speech that Antifa allows.

“Antifa is a far-left militant [2] political movement of autonomous, self-described anti-fascist groups in the United States.[3][4][5] The term is loosely used to refer to anti-racist, anti-sexist, anti-homophobia, as well as anarchist and anti-capitalist groups.[6] Unlike the traditional left, the over-riding aim of self-described Antifa groups is to oppose fascism. These groups are usually anti-government and anti-capitalist, and their methodologies are often perceived as more closely aligned with anarchists than the mainstream left.[2]

Antifa is supposed to be against what many people would agree with if only Antifa would do it in a more honest way, like discuss it without the black hoods, sticks, bats, and whatever else they can use to silence what they claim to be fighting, “Free Speech.”

They even admit they do not align themselves with the “Left” because the “Left” does not hold their ideologies.

But allow me to continue from Wikipedia:

“According to National Public Radio, “People who speak for the Antifa movement acknowledge they sometimes carry clubs and sticks,” and their “approach is confrontational.”[26] CNN describes Antifa as “known for causing damage to property during protests.”[3] Scott Crow, described by CNN as “a longtime Antifa organizer,” argues that destroying property is not a form of violence.[3]”

Clearly, Antifa goes to events looking to harm and disrupt any peaceful rally, especially if it is a rally for Conservatives.

We cannot allow a group from any side to stop “Free Speech,” but Antifa does just that; and it goes after certain speech it does not want their base to understand because once they do understand, they may decide to leave the Communist ideology of Antifa.

Again, from Discover the Networks:

“At its heart, the Antifa movement is in fact a communist phenomenon whose adherents – consisting predominantly of upper-middle-class white males – believe that conservatives, particularly those who supported Donald Trump in the 2016 U.S. presidential election, are the moral equivalent of Nazis and are therefore not entitled to the free-speech protections guaranteed by the First Amendment. Moreover, as the New York Antifa group indicated, the movement has a strong element of anarchism as well; thus its members are commonly seen waving the red and black flag of anarcho-communism.”

Yes, read the last hyphenated word in the paragraph above, “anarcho-communism.” That term alone shows what the Antifa group really is a bunch of Communists that are mad because their candidate, Hillary Clinton, lost and now it is up to them and anyone they can convince to do all they can to disrupt our government.

“The Left’s Portrayal of Antifa

Mainstream media outlets have typically refrained from acknowledging just how radical and revolutionary Antifa’s objectives and practices are, portraying the movement instead as a well-intentioned alliance of idealists who seek nothing more than to thwart the evils of right-wing “fascism.”The Washington Post, for instance, has benignly referred to Antifa and its allies as “antifascist groups.” A Los Angeles Times piece calls it an “anti-fascist movement.” And the New York Daily News has described Antifa as an “anti-fascist collective.”

Other sources – both mainstream and far left – have painted Antifa in openly complimentary tones. For example, an April 2017Esquire magazine article lauded the movement’s “anti-fascist” vigilantes for crashing pro-Trump demonstrations where a “significant … presence” of “white supremacist, alt-right, anti-Semitic and neo-Nazi groups … intersect with the president’s broader support base.” A January 2017 piece in The Nation celebrated the fortitude of Antifa activists, comparing them to those “who long before Trump have defended counter-violence against oppression—as in Ferguson, as in Baltimore, as in Watts, as in counter-riots against the Klu Klux Klan, as in slave revolts.” And the Southern Poverty Law Center (SPLC), an organization that routinely likens conservatives to racists and fascists, reports that Antifa activists bravely “confront neo-Nazis and racist skinheads in the street.” Further, SPLC has published a number of stories about Antifa protesters sustaining injuries in their skirmishes with pro-Trump conservatives.”

We must take a very deep look at what Antifa really is.

We should know what the Nazi, skinhead, white supremacists are. So they have been well defined, but Antifa runs around the outside of the flames it starts like a moth who knows better than to go into the fire.

However, if “WE THE PEOPLE” keep allowing this to happen without demanding justice be brought up this disruptive group, we are accepting their ideas and the shutdown of Free Speech.

We do not wish to shut down Free Speech, but to demand only one side of a story, destroy property and commit acts of violence against peaceful people like Antifa is doing is not right; and the Lame Stream Media will not go against what they do and say for fear of being shut down by Antifa, much like what happened when the Nazi’s took control of Germany.

It is up to “WE THE PEOPLE” to either stand tall and demand an investigation into Antifa to see how bad they are and to jail those who have broken the law in order to force their ideas upon us.

It is time to either take a stand or watch our nation be torn apart by ideas that do not represent the law.