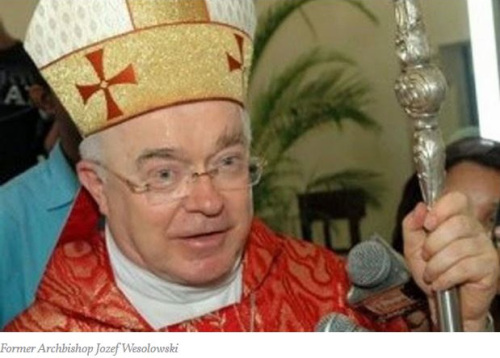 In a sobering message at the funeral of Cardinal Joachim Meisner on July 15, 2017, Pope Emeritus Benedict XVI described the Catholic Church as a “boat” that “has taken on so much water as to be on the verge of capsizing.”

Note: Cardinal Meisner was one of four Catholic clergymen who wrote a letter (dubia) to Pope Francis asking him to clarify his Amoris Laetitia apostolic exhortation that can be understood as giving permission to civilly-divorced-and-remarried Catholics (and therefore living in adultery, according to the Church) as well as unmarried cohabiting Catholics (i.e., living in fornication) to receive Holy Communion. Reportedly, Francis published the exhortation despite having received corrections from theologians. Months after Meisner et al. sent Francis their letter, the pope still has not responded.

Under house arrest at the Vatican, Wesolowski is also accused of raping numerous children in the Dominican Republic and Poland, and is one of the highest-ranking church officials to be accused of sexually abusing children during the Catholic Church’s widespread and costly sexual abuse scandal. Wesolowski is also suspected of having sexually abused children while serving in other posts during his career — in South Africa, Costa Rica, Japan, Switzerland, India and Denmark.

After being publicly accused of procuring child prostitutes in 2013, Vatican officials secretly removed Wesolowski from his post as papal nuncio in Santo Domingo so as to avoid criminal prosecution. In September 2014, Weslowski was placed under house arrest at the Vatican in response to popular outrage after reports began to circulate that the accused child rapist was free to wander the streets of Rome. Authorities in both the Dominican Republic and Poland — Wesolowski’s country of origin where he has also been accused of sexually abusing children — want him extradicted to face criminal charges.

According to Vatican detectives, some of the horrors found on the former Archbishop’s computer included around 160 videos showing teenage boys forced to perform sexual acts on themselves and on adults, and more than 86,000 pornographic photos methodically archived in several category-based folders. At least another 45,000 pictures were deleted, while even more child pornography was found on a laptop Wesolowski used during his trips abroad.

Pell, the highest-ranking Vatican official to ever be charged in the church’s long-running sexual abuse scandal, had also been accused of mishandling cases of clergy abuse when he was archbishop of Melbourne and, later, Sydney. He has denied all abuse allegations.

Meanwhile, the AP reports that, ignoring advice from the Vatican’s Congregation for the Doctrine of the Faith, “Pope Francis has quietly reduced sanctions against a handful of pedophile priests, applying his vision of a merciful church even to its worst offenders in ways that survivors of abuse and the pope’s own advisers question.”

At least one case has come back to bite Francis:

“An Italian priest who received the pope’s clemency was later convicted by an Italian criminal court for his sex crimes against children as young as 12. The Rev. Mauro Inzoli is now facing a second church trial after new evidence emerged against him”.

In late June, 2017, Vatican police raided a cocaine-fueled gay-sex party at the apartment of Monsignor Luigi Capozzi, 49 — the secretary of one of Pope Francis’ key advisers and president of the Vatican’s Pontifical Council for Legislative Texts, Cardinal Francesco Coccopalmerio.

Ironically, the apartment is in a building right next to St. Peter’s Basilica, which belongs to the Vatican’s Congregation for the Doctrine of Faith — the arm charged with tackling clerical sex abuse. As such, the building enjoys the extraterritorial rights of the Vatican, unchecked by the Italian State.

After neighbors complained repeatedly about constant comings and goings of visitors to the building during all hours of the night, Vatican police raided the apartment and found multiple men engaged in rampant drug use and homosexual activity. Police arrested Capozzi, whom Italian media called an “ardent supporter of Pope Francis,” after taking him to a clinic to detox from the cocaine he’d ingested. Capozzi is now on a spiritual retreat in an undisclosed convent in Italy. Despite his arrest, he is still listed as an active staff member on the website of the Pontifical Council for the Interpretation of Legal Texts.

In response to the news of the police raid, Pope Francis decided to “accelerate” the retirement of Cardinal Francesco Coccopalmerio. At age 79, Coccopalmerio is way beyond the age of retirement of 75, but was kept on by Francis. Incredibly, Coccopalmerio had recommended Capozzi for a promotion to bishop, despite Capozzi’s previous alleged drug overdoses.

Coccopalmerio, as President of the Pontifical Council for the Interpretation of Legal Texts, is the Vatican’s top canonical official and one of Pope Francis’ closest collaborators and ardent supporters. Earlier this year, the Vatican’s publishing house released with much fanfare a book by Coccopalmeiro that defended Francis’s Amoris Laetitia, even though it contradicted perennial Catholic teaching.

“But if I see that the two persons truly love each other, do acts of charity to those in need, for example … then I can also say that, although the relationship remains illicit, positive elements also emerge in the two persons. Instead of closing our eyes to such positive realities, I emphasize them.”

“Given the monitoring and whispering that goes on in the Vatican, it is unlikely to the point of absurdity that Cardinal Coccopalmerio was unaware of Msgr. Capozzi’s disgusting activities. In fact, when we consider the 300-page document on the homosexual lobby that was handed to Pope Benedict XVI just before he resigned, the probability is that many who work in the Vatican were fully aware of what Capozzi was doing, and that such activities are taking place among other clergy as well.”

“We know for a fact that Communists and homosexuals were specifically recruited as far back as the 1920’s to infiltrate seminaries. It was a concerted effort to destroy the Church from within. What we are seeing is the culmination of nearly 100 years worth of this effort playing itself out.”

In March 2017, reports surfaced that Archbishop Vincenzo Paglia, in 2007 when he was a diocesan bishop, had commissioned a homosexual artist to paint a gigantic blasphemous homoerotic mural in his cathedral church of the Diocese of Terni-Narni-Amelia in Umbria, central Italy.

The mural that covers the opposite side of the facade of the church portrays Jesus carrying nets to heaven filled with writhing naked and semi-nude homosexuals, transsexuals, prostitutes, and drug dealers. The image of the archbishop himself is depicted among those in the nets.

Archbishop Paglia defended the mural deemed by Catholic critics to be “blasphemous” and “disgusting,” as well as “demonic,” saying it was part of a commitment to evangelizing. Regarding his inclusion in the mass of nude bodies shown in the mural, he said, “I too am included in the mural as one who needs redemption no less than anyone else.”

Not coincidentally, Paglia also defended Pope Francis’ Amoris Laetitia on allowing adulterers and others living in mortal sin receive the Eucharist, which reinforces the suspicion of many that the real intent of Amoris Laetitia ultimately is to legitimate homosexuality.

Commenting on the cesspool in the Vatican, Riposte Catholique observes:

“One thinks one is dreaming: in the most deplorable of ways, the Rome of today seems to have fallen lower than the Rome of the Borgias.”

In a talk given in Washington D.C. last October, the orthodox Bishop Athanasius Schneider of Kazakhstan points out that where there is heresy, there is also sexual immorality because “heresy” always goes hand-in-hand with an “unchaste life”.

No wonder some Catholics call Jorge Bergoglio (Pope Francis is his job title) an anti-Pope.

No wonder U.S. Catholic congregations are aging and dying off. At least 60% of most congregations today are over 65 years of age. (Catholic Journal)