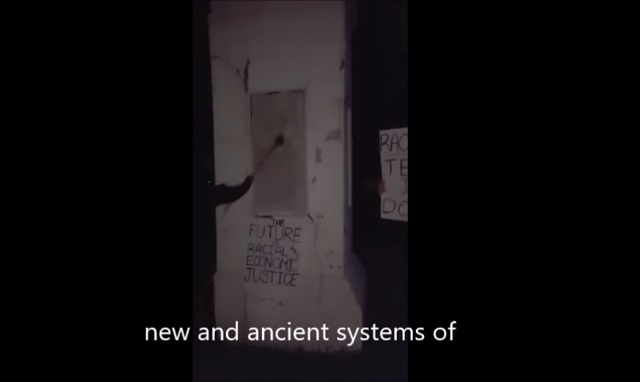 A gang of thugs pursuing “racial and economic justice” filmed themselves smashing a 225-year old monument to Christopher Columbus in Baltimore under the cover of darkness early Monday morning.

They uploaded the video to YouTube later in the day along with the following communist drivel:

“Christopher Columbus symbolizes the initial invasion of European capitalism into the Western Hemisphere. Columbus initiated a centuries-old wave of terrorism, murder, genocide, rape, slavery, ecological degradation and capitalist exploitation of labor in the Americas. That Columbian wave of destruction continues on the backs of Indigenous, African-American and brown people.

“Racist monuments to slave owners and murderers have always bothered me. Baltimore’s poverty is concentrated in African-American households, and these statues are just an extra slap in the face. They were built in the 20th century in response to a movement for African Americans’ human dignity. What kind of a culture goes to such lengths to build such hate-filled monuments? What kind of a culture clings to those monuments in 2017?”

Indian Americans, who are also “brown,” have the highest incomes in America. They make 25% more on average than European Americans.

How does that fit into your theory?

Someone took a sledgehammer to Baltimore's 200-yr-old monument to Christopher Columbus early this morning https://t.co/Tc7ZoPXfUr pic.twitter.com/eaJzsBeTMV

Perhaps the reason you’re living in poverty is because you go around smashing things rather than building them?

Elected communists in Baltimore removed a statue of Robert E. Lee last week only to have it replaced with a pregnant black woman deemed the “lady liberty of black power.” It was destroyed overnight either due to rain or being tipped over:

Trying to figure if statue topple is vandals or weather. No witnesses to vandalism. Material wet from previous rain. @wusa9 pic.twitter.com/KItv1XzyFA

Baltimore police at downed statue to investigate poss. destruction of property. Officer says "looks like" someone pushed over @wusa9 pic.twitter.com/UFiECYh9Je