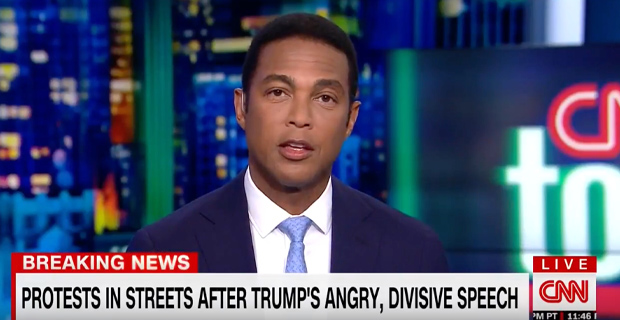 CNN host Don Lemon accused President Trump of “trying to ignite a civil war” even as alt-left protesters were rioting in the streets and attacking Trump supporters.

“He has given oxygen to racists,” Lemon said. “He hasn’t really said anything [to] denounce the alt-right….He is clearly trying to ignite a civil war in this country. He has not tamped down race.”

Lemon subsequently read out a tweet by CNN commentator Ana Navarro in which she claimed Trump had “early-onset dementia.”

In a separate rant, Lemon accused Trump of being mentally unstable and attempting to “rewrite history” on Charlottesville.

Lemon’s charge that Trump is responsible for inciting a civil war is an interesting claim given that CNN has endorsed the very alt-left groups who have openly announced they will stage anti-Trump riots in an effort to bring about a civil war.

Even as Lemon spoke, violent alt-leftists were out in the streets throwing rocks at police officers, rioting and punching Trump supporters.

That was all Trump’s fault too, according to CNN.

Trump also specifically denounced neo-nazis and white supremacists during his speech, while also (accurately) identifying Antifa as a violent group.

Response to Lemon’s rant was brutal.

“CNN’s Don Lemon “Trump clearly trying to ignite a Civil War in this country.” This is beyond fake news, this is enemy propaganda,” commented Mark Dice.