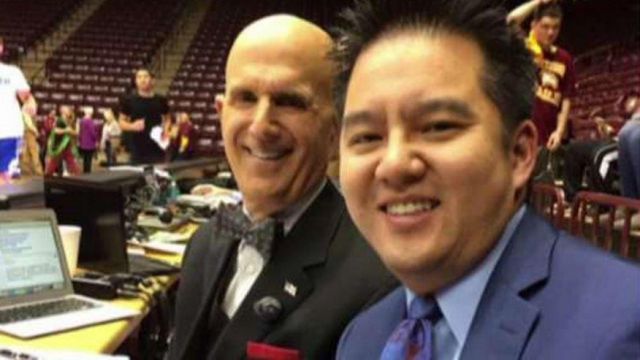 Lee, an Asian-American sportscaster who started with the network in 2016, was moved to a different game “simply because of the coincidence of his name,” ESPN said, referencing the Confederate general Robert E. Lee.

ESPN pulls announcer from calling a University of Virginia football game because of his name #RobertLee pic.twitter.com/V3K6SWo62C

…ESPN, which has faced accusations of liberal bias that some observers believe has led to a downtick in viewership, said it moved its announcer to the Youngstown State game at Pittsburgh.

The network’s full statement: “We collectively made the decision with Robert to switch games as the tragic events in Charlottesville were unfolding, simply because of the coincidence of his name. In that moment it felt right to all parties. It’s a shame that this is even a topic of conversation and we regret that who calls play-by-play for a football game has become an issue.”

According to the New York Times, ESPN took him off the game “for his safety.”

…ESPN executives and Mr. Lee decided that for his safety it would be best to have him to work on a different game that Saturday, a network spokesman said.

From 1862 until his surrender in 1865, ESPN college football announcer Robert Lee commanded the Confederate Army of Northern Virginia. pic.twitter.com/eQKXyXRNgl

2017: ESPN pulls Asian announcer from a game because his name is Robert Lee.

ESPN hates racism so much that they're punishing an Asian guy for having an Asian last-name. #RobertLee @espn

I'm sitting here blown away about the ESPN Robert Lee story. You can't make this shit up. Ron Burgundy is running ESPN.

Evidently, after mass outrage an anonymous ESPN executive sent a letter to lefty writer Yashar Ali‏, the same guy who was the point man for Kathy Griffin after her beheading stunt, trying to blame everything on Lee and insist they acted to protect him from “embarrassment”:

Just received this email from an ESPN executive re the Robert Lee controversy. pic.twitter.com/OuBORlWO9f

Literally no one is embarrassed for Robert Lee. The embarrassment is entirely focused on you, the higher-ups at ESPN. This letter makes it even more embarrassing seeing as how you threw Lee under the bus to try and save face and protect your own asses.