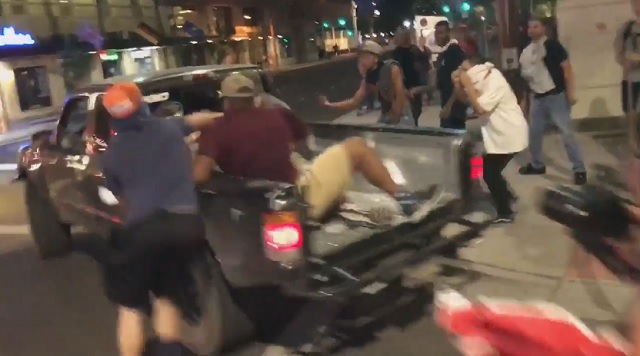 Disturbing video shows a mob of angry rioters attacking a group of Trump supporters as they left the Phoenix Convention Center after President Trump’s speech on Tuesday night.

Excuse me, let me rephrase that according to the AP’s stylebook:

A group of mostly peaceful protesters were filmed getting involved in a kerfuffle with a group of suspected neo-nazis as they left a Klan rally headlined by President Donald Trump on Tuesday night.

The peaceful protesters were seen calling the Trump supporters “Nazis” and then throwing punches at them as they entered their truck to escape the mob.

The attacks only got worse as the group entered their truck. Some people sitting in the truck bed were punched and the outside of their vehicle was hit with assorted objects. The driver actually stopped his truck and backed up into the mob for a split second before driving away.

Despite the claims of the lying media, including and perhaps especially Fox News, these last few “peaceful protests” have been nothing of the sort.

Man escorted out of Common after witness say he was apparently punched in the face. Wearing a red Trump hat – unclear what prompted pic.twitter.com/2KaB6QSsqA

Just as a reference for the media, no one seeking to take part in a peaceful protest shows up with bottles of their own urine.

The only reason there hasn’t been more violence (caught on film) is because so few right-wingers actually showed up and engaged these hysterical mobs.

Again, for the sake of those in the media, this old Tea Party rally from September 12th, 2009 is what a peaceful protest looks like:

Somewhere around half a million or more people showed up. There was no violence, no smashing of windows and there was no need for any police in riot gear armed to the teeth. Additionally, the protesters left the place cleaner than before they arrived.