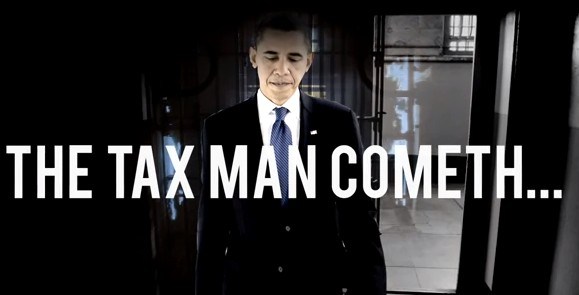 The burdensome and regulation filled tax system on those living in the “land of the free” is more than likely on the verge of collapse. The IRS can’t collect enough money, and the government spends too much. But the left is fighting to ensure the government continues to steal as much as possible.

If the tax system collapses, it’ll be leftists we should worry about. If one in America even suggests to a leftist that they don’t want to pay taxes (have the IRS steal their hard earned money) they are ridiculed, chastised, and accused of not wanting to help the poor. For now, the IRS has bigger fish to fry, but that won’t last, as left-leaning rags everywhere suggest harsher and more aggressive means of taking from others. The IRS is ratcheting up their tax collecting and going after anyone who may have tried to keep some of their own money.

In March, federal agents raided the headquarters of equipment giant Caterpillar Inc, as part of a long-running investigation into whether the company owes $2 billion in back taxes and penalties for a scheme that allegedly shifted profits to Switzerland. Caterpillar isfighting the charges. –Vice

But what the left doesn’t understand is the moral hypocrisy in their need to help the less fortunate. It isn’t morally superior to steal from someone else (no matter how much more they have than you) in order to fund things you find righteous. Which is reason number one why someday human thinking will evolve beyond the idea of taxation and government. Tax experts even say the system could be on the road to collapse after years of “neglect.”

Leaders and experts from both parties say the IRS is losing its ability to carry out core functions. “I am concerned about the staffing of the IRS. It is an important part of fixing the tax gap,” Treasury Secretary Steven Mnuchin told Congress in January during his confirmation hearings. “[If] we add people, we make money.” In late 2015, six former tax commissioners—including from the last three Republicans administrations—wrote a letter lambasting the ongoing cuts. “Over the last fifty years, none of us has ever witnessed anything like what has happened to the IRS appropriations over the last five years,” they said.

And leftists are incredibly concerned that no one will be around to steal their moneyand use it to oppress them. Several articles have been written coming from a place of fear that there are not enough tax collectors out there to help keep the government around. At this point, the propaganda which demands one pays taxes is being shattered by the rational humans who know taxation is theft. People are slowly realizing what a racket taxation actually is, well, most people; the left is still confused.

Simply put, the power of propaganda to distort and control the mass mind is more powerful than all the armies and military technology of history combined.

The “income tax” as it is called is both immoral and illegal. The IRS was formed in 1913 following the adoption (it was never properly ratified) of the 16th Amendment. It is one of the greatest frauds ever perpetrated upon the American people. Now no one questions it.

The income tax was enacted even though the U.S. Supreme Court had only recently ruled in Pollock v. Farmers’ Loan & Trust Co. that certain taxes on direct income were unconstitutionally unapportioned direct taxes and violated Article I, Section 9 of the U.S. Constitution. Not covered in Pollockis the fact that the income tax also violates the 5th Amendment: No person shall… be deprived of life, liberty or property… nor shall private property be taken for public use without just compensation. –Personal Liberty

So what is the left so afraid of? Most loathe president Donald Trump with a passion, so why would they even want to prop up this government? The fact that most people already live paycheck to paycheck doesn’t phase a leftist. The single thing that the government could do to help a family in need is to let them keep all of their money and pay their bills themselves. But this rationale is lost on those who can’t envision their life without someone else ruling over them and telling them what to do and how to live.

So what happens when the tax system does collapse? Will they all of a sudden take the side of the government, who they claim to hate to try to steal that money from people themselves? Or will they finally realize that the government doesn’t just steal from the “rich”, they steal from the poor too -and everyone in between. Abolishing the IRS and the income tax would give Americans freedom that no one has ever dreamed of. They would be able to pay their bills with extra money left to spend and boost the economy.