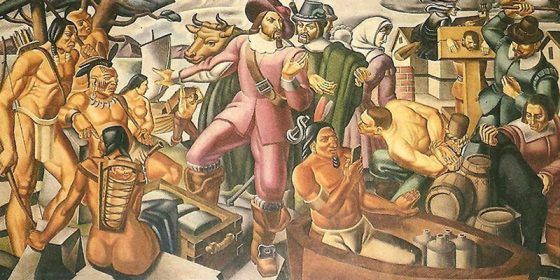 Look very closely at the image above.

That mural was painted by Umberto Romano…in 1937.

Do you notice anything that seems out of place, considering the era depicted and the year the mural was painted?

Here’s a closer look, in case you can’t locate the oddity in the image above: 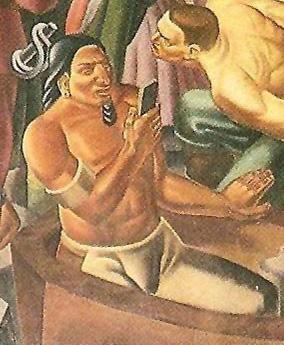 Doesn’t that man appear to be holding an iPhone?

Brian Anderson of Motherboard examined the image and shared an interesting observation:

It’s not clear exactly who this man is, but he might as well be popping off a selfie or thumbing through his news feed. He seems to gaze into the handheld device in such a way that renders all-too-familiar today, as if he’s just read a bad tweet or recoiling from a Trump-related push notification from the Times. He would almost look unremarkable, if only he and the world around him existed at any point in the past decade.

The painting, however, pre-dates the iPhone by seven decades.

Is there some kind of intergalactic time traveling involved here?

Adding a layer of intrigue to it all is the fact that Romano’s mural is focused on one William Pynchon—that’s him at center, wearing pink—who wrote The Meritorious Price of Our Redemption, the first book ever to be banned (and subsequently burned) on American soil, and who just happens to be the earliest colonial ancestor of elusive living novelist Thomas Pynchon.

Maybe I’ve read too much of the latter Pynchon, who was born in—wait for it—1937, the same year Romano finished “Settling,” and whose paranoid fictions, a noted Pynchon scholar told me in 2012, don’t “necessarily present technology as a good thing.”

So…what IS the man in the mural holding?

Some experts believe it is a mirror or a religious text.

What do YOU think?