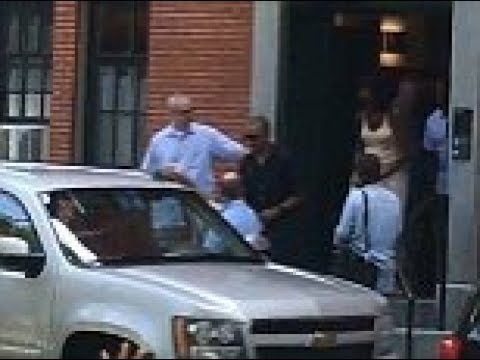 Remember this GIF of Michelle Obama’s swinging nuts while dancing on the Ellen DeGeneres Show, which was aired on CBS on March 16, 2015?

Now that he’s no longer in the White House, Mooch no longer bothers to wear his crotch suppressor.

Fall classes begin at Harvard University on August 30. On Tuesday, August 22, Barack and Mooch accompanied their older daughter, 19-year-old Malia, when she moved into her Harvard dorm. Malia had taken a gap year before Harvard, twerking, exposing her butt and in a drug stupor at music festivals.

The arrival of the Obamas, as reported breathlessly by Page Six‘s David K. Li, sent Malia’s classmates “into a joyous frenzy with hopes they’ll catch a glimpse of her famous parents.”

Someone captured the arrival of the Obamas with his cell phone, seen in this CBS Boston news video:

Note that Michelle Obama was dressed in a white camisole-top jumpsuit, as seen in this screenshot from the 0:25 mark in the above video:

From the above video, I made this GIF of something substantial swinging in Mooch’s pants as he bounces down the stairs:

No wonder there are no baby pics or birth records of Obama’s daughters. See also:

Barack’s fobbing of this transvestite as America’s first lady is one of the biggest hoaxes in U.S. history.