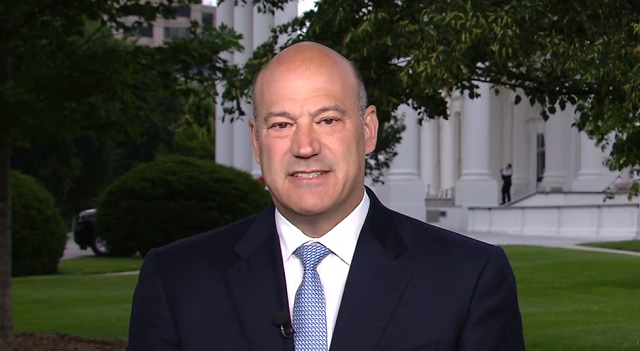 White House economic adviser Gary Cohn attacked President Trump for correctly highlighting the violence on “both sides” in Charlottesville and defended the alt-left thugs Trump condemned as “citizens standing up for equality and freedom.”

Asked by the Financial Times if he considered resigning after Charlottesville, Cohn responded:

I have come under enormous pressure both to resign and to remain in my current position. As a patriotic American, I am reluctant to leave my post as director of the National Economic Council because I feel a duty to fulfill my commitment to work on behalf of the American people. But I also feel compelled to voice my distress over the events of the last two weeks. Citizens standing up for equality and freedom can never be equated with white supremacists, neo-Nazis, and the KKK. I believe this administration can and must do better in consistently and unequivocally condemning these groups and do everything we can to heal the deep divisions that exist in our communities. As a Jewish American, I will not allow neo-Nazis ranting “Jews will not replace us” to cause this Jew to leave his job. I feel deep empathy for all who have been targeted by these hate groups. We must all unite together against them.

Violent communist antifa thugs who were videotaped initiating violence at Charlottesville and attacking news reporters are “citizens standing up for equality and freedom.”

Watch as a Reporter for The Hill gets attacked by AntiFa in Charlottesville! pic.twitter.com/Bq0XRuXZ5y

This is why you don’t appoint Goldman Sachs bankers and registered Democrats to your cabinet, Mr. President.

According to The Washington Post, “Cohn’s comments are extraordinary because few senior White House officials have ever publicly condemned comments made by the president.”

Cohn’s appointment was also extraordinary as he embodies the swamp Trump ran against.

AOCs Latest Stupid Demand: Dissolve SCOTUS ‘For The Sake Of The Planet’
June 30th, 2022 The Lid

Representative Decries The FBI For Acting Like The Gestapo
June 30th, 2022 Sons of Liberty Media