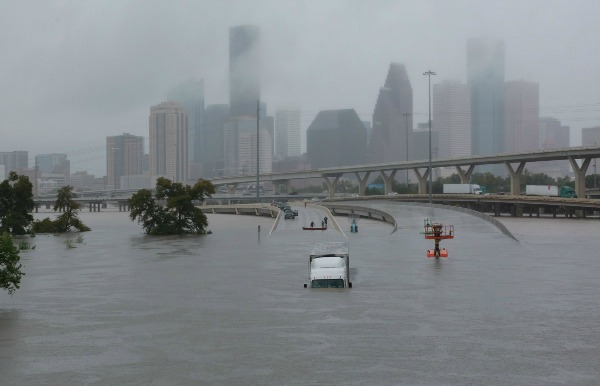 As many of you know, I was born and raised in Houston, Texas and let me tell you, those roots run deep. Yes, it is hotter than the hubs of hell there and mosquitos are the size of pterodactyls, but the people are warm and friendly and have always done what they could to help someone in need. I’ve seen this on more than one occasion and all I can conclude is it’s just the Texas way. That’s how I was brought up and for me, that ingrained sense of duty to help those in need has always stayed with me. But it wasn’t just in Texas where I saw this. When 9/11 happened, I watched in pride as countrymen dropped everything to help those affected by the attacks. I saw it when the Fukushima 50 stayed behind to ensure others were out of harm’s way. It wasn’t just a Texan thing, I came to realize it was a human thing.

But have times changed? Have we become so entranced by our own ideologies and cultural division that we are turning our backs on each other? Let me explain.

This weekend, we all watched as Hurricane Harvey hit the coast of Texas with a vengeance. The damage has been so severe and the flooding so widespread that this storm has now been dubbed the “flood of a lifetime.”

In The Prepper’s Blueprint, I wrote how hurricanes are unpredictable in nature and truly one of the most difficult emergencies to prepare for simply because there are so many variables to account for. They can be mild or severe. They cause wind damage, flooding, tornadoes. You can be fully stocked with provisions and then your home is flooded in a matter of minutes because a creek has flooded and all of those provisions are ruined.

Currently, Hurricane Harvey has dumped massive amounts of rainfall in many towns inside and on the outskirts of Houston and affected about a quarter of the Texas population or 6.8 million people in 18 counties. To make matters worse, incessant tornado warnings are keeping Houstonians in a perpetual state of fear.

As well, everyone that I know living in this area prepared as best as they could with the limited warning they received. Many did not evacuate because voluntary or mandatory evacuations were not given by the city. Since Houston was not going to be a direct hit by the hurricane, officials felt that many could hunker down and everyone would be fine. They did not account for Hurricane Harvey turning into a Category 4 hours before it made landfall.  What I can tell you, is as prepared as many were, the storm this size and magnitutde was no match for their preparedness efforts and this can happen. The latest rainfall totals should give you some perspective. 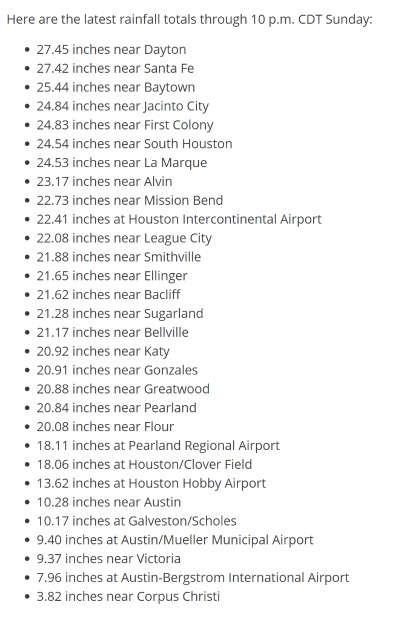 You would think in times such as this, people would see the hell that others are living in and want to help in some capacity. Rather than lending a hand, there are some who choose to sit from the comfort of their homes and make off-handed remarks. In multiple articles on the coverage of Hurricane Harvey, I found comments from readers such as “they deserve what they get because they didn’t evacuate,” or are making political comments in reference to the Hurricane.

Here are some comments from an article at the Washington Post: 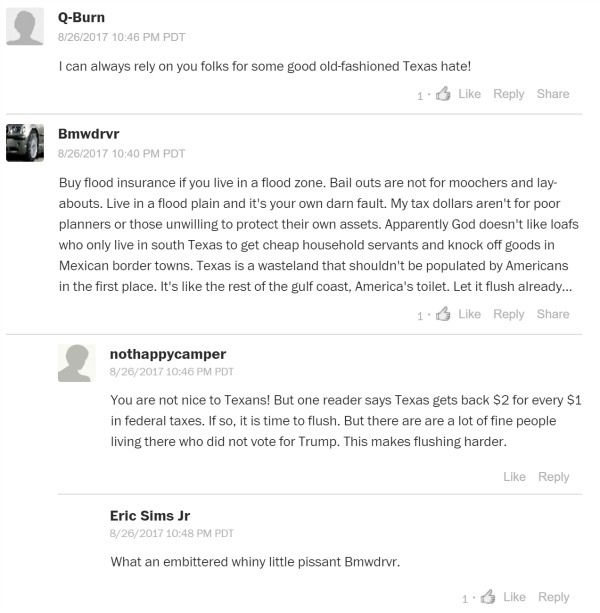 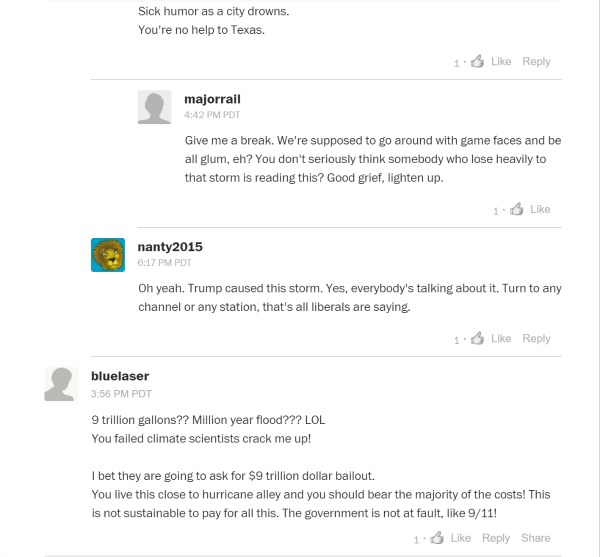 In this Yahoo article 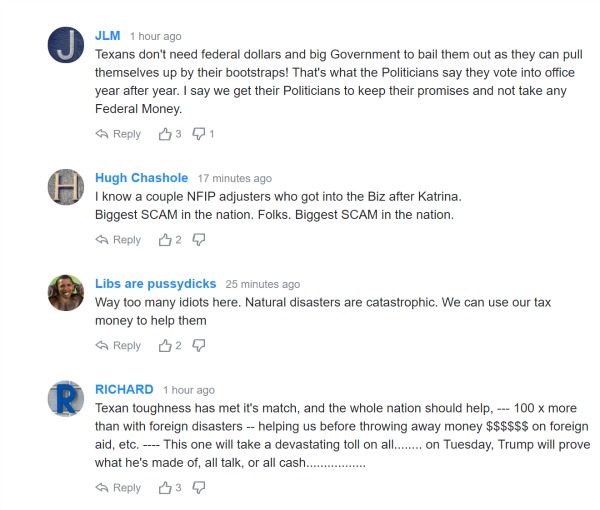 In response to those who are making the above comments, please keep in mind that Texans pay taxes to help with national disasters so when these types of disasters happen in their state, they have every right to request immediate assistance. If national disaster assistance wouldn’t be available, what do you think would happen? Widespread disease, looting, death, and devastation would occur. Do you really want that for someone? Moreover, many of these comments have political overtones. It’s obvious that our country is very divided and there is a lot of bitterness. But political lines cannot be drawn in this type of emergency. By doing so we lose track of what’s important to mankind. I am appalled at the very thought of someone smugly saying how someone doesn’t deserve help and rescue in any type of disaster.

Despite these mean-spirited comments on social media, in true Texas fashion, the communities have bound together. For days I have watched my friends checking on each other through Facebook and social media and making sure everyone was safe, people are taking boats through flooded neighborhoods and risking their lives trying to rescue those in need and take them to safety, as well, people are offering up their homes and businesses for those who are displaced. They are offering food and water to anyone who needs it. It doesn’t matter what nationality, creed, color, or political affiliation they are. If you need help, there are people who want to give it. Simply put, it’s because they care and want to best for their fellow-man.

Moreover, the emergency responders should be commended for their fast acting response. Many haven’t slept in days because of the overwhelming need for assistance. As well, because the city cannot keep up with the need for emergency assistance, good Samaritan are coming from near and far to help those in need.

Rather than spending time making these crass comments on the internet, here’s a novel idea, why don’t you do something proactive and help another human being. Organize a donation center for the victims of this disaster. For instance, many of you have seen a nursing home in Dickinson, TX had to evacuate the elderly. Supplies and donations could be sent there or you could make a donation to the American Red Cross to help with the rescue endeavors they are pursuing. There is so much more we can be doing than turning our backs to those in need. We should all be asking ourselves what has happened to humanity? How have we gotten so far away from caring for those in need? Instead of doing what we can to help we sit and make comments about how they don’t deserve help? We are better than that.

To sum this up, folks, please be sensitive and mindful of what others are going through. Some people are losing everything they have from this storm. My family is battling this storm and in the midst of fighting to save their homes, they are offering refuge to those in need. Let’s all take a lesson from that. Have open and caring hearts and remember that during these times we need to bind together and help our countrymen, not turn our back on them.