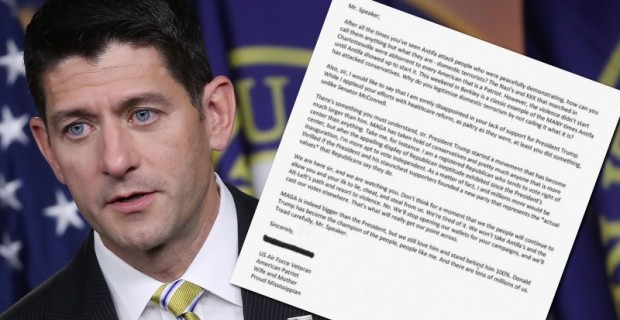 “How can you call them anything but what they are – domestic terrorists?”

An Air Force veteran has slammed Speaker of the House Paul Ryan for defending Antifa, the violent Alt-Left group that has been responsible for innumerable violent assaults on Trump supporters.

Two days after the violence in Charlottesville, Ryan posted a Facebook update in which he lashed out at Donald Trump for saying that both sides were responsible for violent unrest.

“There are no sides,” wrote Ryan. “There is no other argument. We will not tolerate this hateful ideology in our society.”

Ryan has failed to condemn Antifa despite the group’s many violent attacks on Trump supporters, the vast majority of whom are not neo-nazis or white supremacists.

An anonymous Air Force veteran has responded with a powerful letter which warned Ryan that Trump supporters were perfectly willing to vote him out of office.

“After all the times you’ve seen Antifa attack people who were peacefully demonstrating, how can you call them anything but what they are – domestic terrorists?” asked the vet.

“This weekend in Berkeley is a classic example of the MANY times Antifa has attacked conservatives. Why do you legitimize domestic terrorism by not calling it what it is?” the letter continues.

The veteran goes on to assert that Trump supporters will abandon the Republican Party en masse if the GOP continues to undermine the MAGA agenda.

“We are here sir, and we are watching you. Don’t think for a moment that we the people will continue to allow you and your ilk to lie, cheat, and steal from us. We’re tired of it. We won’t take Antifa’s and the Alt-Left’s path and resort to violence. No. We’ll stop opening our wallets for your campaigns, and we’ll cast our votes elsewhere. That’s what will really get our point across.”

“MAGA is indeed bigger than the president, but we still love him and stand behind him 100%. Donald Trump has become the champion of the people, people like me. And there are tens of millions of us. Tread carefully, Mr. Speaker,” the letter concludes.

Meanwhile, Paul Nehlen, who is challenging Ryan in the Republican primary, called the Speaker of the House a “coward” for failing to condemn Alt-Left violence.

“What he is doing is working to further divide the country so that he can keep his hands on the levers of power. People aren’t buying what Ryan is selling in terms of this fake narrative that there is only one side to the violence,” said Nehlen.

As we reported yesterday, even the mainstream media is now being forced to go back on the narrative that Antifa has the moral high ground, with both the Washington Post and MSNBC’s Joe Scaborough denouncing the group.