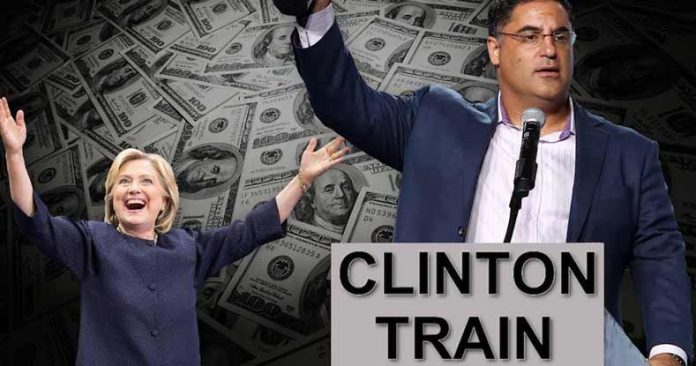 It was recently announced that The Young Turks Network, led by Cenk Uygur, had secured $20 million dollars in funding to bolster their business/media presence. But while Cenk Uygur attempts to sell his brand to the public as a progressive alternative media outlet, facts reveal that this is nothing more than a façade meant to lure young liberal pragmatists into buying into a hidden corporatist agenda.

The $20 million in funding is slated to be used to increase the size of the TYT newsroom and for business operations – but where did the money actually come from?

It is important to note that TYT has reported on some hard-hitting stories and exposed serious problems within the state, and Uygur was unafraid of calling out corruption—so much so that he quit his job at MSNBC to work on the media project. However, once we start following the recent money, we can see a telling revelation begin to unfold.

The funding comes from a number of sources, so let’s take a look at these entities and the people behind them to better understand the agenda at play.

“News is red hot right now and being positioned on the progressive side of the coin has put us in a very good place,” Uygur said, according to Bloomberg.

Far from being an independent progressive news source, as they proclaim to be, the TYT network is now being supported by your run of the mill corporatist Clinton money machine. Although attempting to publicly operate as an insurgent progressive activist outlet – think Bernie Sanders – the financial backing by the aforementioned entities reveals something vastly different.

One need only look at who is behind the funding to understand the agenda being put into motion.

Greycroft Partners – venture capital fund run by Alan Patricof — Patricof has been active in Democratic Party politics, contributing to candidates including Bill and Hillary Clinton, whom he met in the Hamptons when they were there guests of lobbyist and Democratic activist Liz Robbins. Greycroft Partners pumps money into the Clinton slush funds so their businesses can curry favor from the government in an effort to maximize profits on the companies they are invested in.

Jeffrey Katzenberg – Hollywood mogul & film producer, Disney, Dreamworks Animation — Katzenberg has been actively involved in Democratic politics. He actively supported Barack Obama, and has been called “one of Hollywood’s premier political kingmakers and one of the Democratic Party‘s top national fundraisers.”

To give you an idea of how enmeshed Katzenberg is in run of the mill corporatist Democratic Party politics, he co-hosted a fundraiser for President Obama at the home of actor George Clooney in May 2012, with the event reportedly raising nearly $15 million.

Additionally, it was reported that Obama held a private meeting in Los Angeles on Oct. 7, 2012, where he joined Bill Clinton at Katzenberg’s Beverly Hills mansion along with several deep-pocketed Democratic donors. Oddly, members of the White House press corps who had traveled to California with Obama were not allowed into the home, but kept in the garage of Katzenberg’s mansion — with one reporter called the meeting “unusual.” Katzenberg, who had previously donated $2 million to the pro-Obama PAC Priorities USA Action, donated an additional $1 million in October 2012.

Revealing that he is no progressive by any stretch of the imagination, Katzenberg tellingly donated $1 million to the Super PAC Priorities USA, which supported Hillary Clinton in the 2016 presidential race.

Furthermore, in June 2016, information released by WikiLeaks regarding leaked Democratic National Committee documents confirmed that Katzenberg donated $3 million to the Hillary Clinton campaign. Then in October 2016, he hosted a $100,000-per-person fundraiser at his Beverly Hills residence with Obama as the main attraction.

Does he sound like a true progressive, in the style of Bernie, or something more akin to your run of the mill corporatist Democratic party insider?

Let’s call a spade a spade.

Katzenberg’s WndrCo is nothing more than a half a billion dollar slush fund designed to buy up and promote faux progressive websites and Youtube channels with the intent of having them operate as an echo chamber meant to bolster corrupt liberal-corporatist candidates like Hillary Clinton. Essentially, they work to normalize their corporatist establishment candidates in places where Bernie supporters frequent.

Not sounding so progressive anymore, huh?

The idea that someone with such a strong track record of support for the Clinton machine and Obama, like Katzenberg, is actually working to help real progressives and progressive ideas come to the forefront of American political discourse is patently absurd.

Ironically, Cenk still attempts to maintain that he is against money in politics – completely failing to mention that his newest corporate owners have shoveled millions of dollars into the pockets of Hillary and Obama – both standard bearers for the corporatist brand of Democratic party politics.

The reality of the situation is that mega rich corporatist Democratic backers aren’t investing in TYT network to turn a new leaf. These vulture capitalist outfits are buying influence within progressive outlets like Young Turks as a means of indoctrinating their audiences prior to the next election cycle — with hopes they can undermine the next Bernie.

It’s worth noting that TYT actually supported Bernie in the primaries.

So, when super rich centrists invest $20 millions of dollars into the company, one must wonder if this is to support them or to change their messaging, in an effort to keep them from promoting real progressives like Bernie during the next election cycle. Buying up leading progressive influence sites like the Young Turks is an ingenious strategy by the oligarchy to maintain control of political discourse in the United States.

It seems obvious that the Clinton machine has a strategy in place to prevent the rise of the next Bernie Sanders, and Uygur seems more than content to sell out his progressive base to standard corporatist Democratic control. Make no mistake — these Clinton cronies are buying influence in progressive outlets in an effort to maintain power for the political and financial elite. The oligarchy refuses to allow for political discourse to manifest organically, and are working diligently to propagandize the public.

Please share this important story to expose the divide and conquer strategy being implemented by the ruling elite!