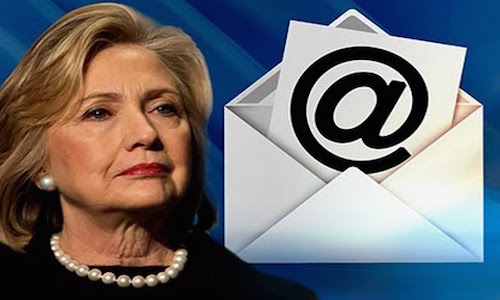 Does anyone in DC understand what it means to be in the Executive Branch? It is about bringing justice upon those who break that law!

The Federal Bureau of Investigation is now rubbing their own corruption, along with the corruption of Hillary Clinton in the faces of the American people.

Forget that James Comey is gone and that Christopher A. Wray, a Trump appointee, is in charge. It makes no difference because both are involved in the coverup of Clinton’s illegalities when it comes to her time as Secretary at the State Department.

Not only was the FBI under Comey unwilling to call on the DOJ to indict Clinton for her illegal email server, but now, under Wray, they are claiming since there is a lack of public interest in her emails that they are justified in withholding documents from an attorney seeking the FBI’s documents on Clinton via a Freedom of Information Act request.

Ty Clevenger, the lawyer, has been trying to get Mrs. Clinton and her personal lawyers disbarred for their handling of her official emails during her time as secretary of state. He’s met with resistance among lawyers, and now his request for information from the FBI’s files has been shot down.

“You have not sufficiently demonstrated that the public’s interest in disclosure outweighs personal privacy interests of the subject,” FBI records management section chief David M. Hardy told Mr. Clevenger in a letter Monday.

“It is incumbent upon the requester to provide documentation regarding the public’s interest in the operations and activities of the government before records can be processed pursuant to the FOIA,” Mr. Hardy wrote.

Mr. Hardy should know better. The request concerning Clinton’s emails and her activities while at the State Department are not a “privacy” issue.

They are first and foremost a national security issue and since the FBI has basically said that she broke the law during her time at the State Department, Clevenger should not have to demonstrate anything. His request should simply be honored.

Second, the public’s interest in this matter is of grave importance seeing that Clinton’s illegal email server

has led to at least one verifiable death tied to it.

As for Mr. Clevenger, he is “stunned” that the FBI does not consider the matter of public interest seeing that members of Congress, who represent the public, have called for an investigation into whether Clinton perjured herself during testimony under oath on Capitol Hill.

“I’m just stunned. This is exactly what I would have expected had Mrs. Clinton won the election, but she didn’t. It looks like the Obama Administration is still running the FBI,” Mr. Clevenger told The Washington Times.

“How can a story receive national news coverage and not be a matter of public interest? If this is the new standard, then there’s no such thing as a public interest exception,” he added.

How can it? I’ll tell you how. The same corrupt people there were in there before Trump came in are still there.

The machine keeps turning and Trump keeps putting in these kinds of people.

As head of the Executive Branch, President Trump should demand the release of the documents requested.

An executive order should do the trick, if he is serious about transparency.

After all, it was candidate Trump who promised to have his Attorney General appoint a special investigator and prosecutor to look into Clinton. Yep, I’m going to continue to remind people of this because we all know Democrats are ramping up to put Clinton up for round two in the future.

This is just a step away from that.

So, whAT about it Mr. Trump? Why not tell the FBI, who ultimately answer to you, to turn over these documents? I mean, if you are really serious about keeping your promise concerning Hillary Clinton to the American people.

Then again, many of us saw a lack of conviction with that promise when he immediately back-peddled after being elected.

It’s time that the FBI ponied up the documents being requested, and it’s time Trump kept his promise about Clinton (He can’t blame that inaction on Congress, Democrats or Republicans). The fact that they perceive the public isn’t interested in the documents is not a valid reason to not turn them over. It’s covering for Hillary Clinton, plain and simple.