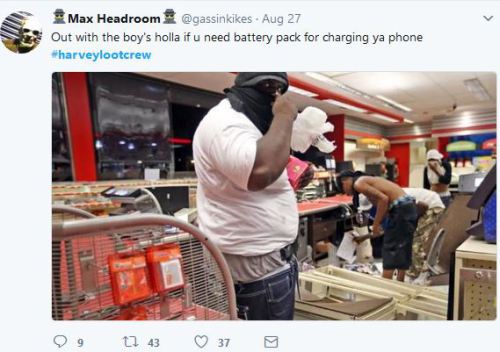 The saying “No good deed goes unpunished” is a comment on the perversity of human beings.

Bob Price reports for Breitbart that there are three Cajun Navy groups doing rescue work in the Houston area, where thousands remain stranded in flood waters from Hurricane Harvey.

Yesterday, one Cajun Navy group saved the life of a woman they found floating face down in a flooded roadway.

But Clyde Cain of Louisiana Cajun Navy told CNN that the rescuers are being shot at:

“We have boats being shot at if we’re not picking everybody up. We’re having to pull out for a minute. We’re dropping an airboat right now to go rescue a couple of our boats that broke, and they’re kind of under attack.”

To protect the volunteers, members of the Louisiana Cajun Navy were ordered to stand down. A message on the group’s Facebook page said that the team members are safe after they were shot at by looters posing as people needing rescue during an attempt to rob and steal the Cajun Navy boat. The post has since been taken down, but below is a screenshot of the Facebook message:

Looters are not just shooting at Cajun Navy rescuers, they are boasting about their looting with the Twitter hashtag #harveylootcrew. Here’s a sample of their tweets, congratulating themselves for targeting white people (“crackas”) and Trump supporters.

Their pictures leave no doubt as to their racial identity, but not a word about #harveylootcrew from the corrupt and deceiving MSM.

To make a terrible situation even worse, despite yesterday’s efforts to prevent uncontrolled overflow using slow release, one of two major reservoirs in Houston — the Addicks Reservoir — is spilling over for the first time in history. A Harris County Flood Control District meteorologist said the overflow from the reservoirs would eventually flow into downtown Houston, exacerbating the flood from Hurricane Harvey.

Below are the animal welfare groups that are helping to rescue and provide shelter for animals stranded in the terrible flood. Please donate!