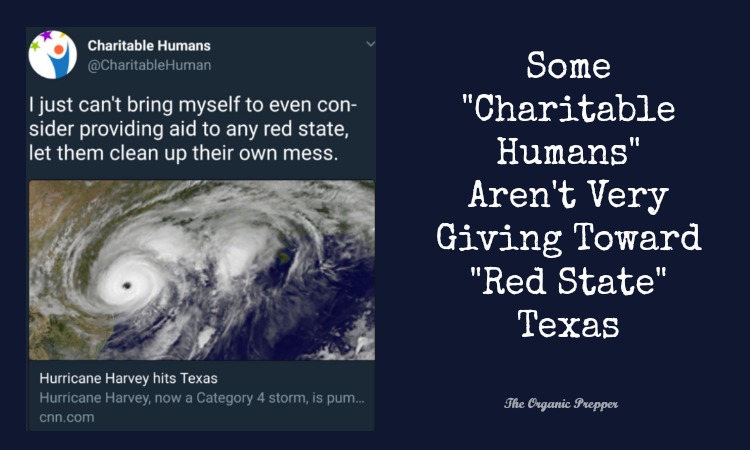 This isn’t the only nasty-spirited tweet by the organization, which describes itself as a “progressive tax-exempt nonprofit organization seeking new and innovative approaches to address issues in our world and advance humanitarian causes.”  Someone grabbed a screenshot of the other shocking tweets, too. Psst: I’d just like to point out to the misguided tweeter that Hillary Clinton actually carried the election in Houston with 707,914 votes to Trump’s 545,955 votes. (source) While I completely support the right of any person not to donate money to a cause they find repugnant, to publically espouse such a vile opinion like that is in the poorest of taste. What a stunning stream of hatred from the spokesperson of a group that is supposed to help people in need.

This is more evidence that some people on the Left just really don’t think like the rest of us do and can justify any opinion in the name of “social justice.”

After a righteous outcry on Twitter, Charitable Humans closed down all of their social media accounts and then posted an explanatory, half-hearted apology on their website, entitled “We’re Horrified by Our Twitter Actions.”

There are no words to express the distaste and hateful words that our Social Media Coordinator unleashed on what was supposed to represent Charitable Humans, an organization that has engaged in global humanitarianism activities in war-torn and severely impoverished nations since 2005. The purpose of our charity was, and so remains, to make the world a better place by focusing on a larger mandate of cultivating a global citizenship initiative along with an online platform for active engagement, and a platform to help people and nonprofit organizations like ours further the reach and impact of good deeds.

We don’t condone the denouncement or imperilment of any human, individual or group; ultimately because that serves no useful purpose and is rather an impairment to progressive change. Our views extend equally toward those that do good and evil in the world, for both have much to teach us about the state of humanity. We’re not for a moment implying that the targets in which the Tweets offensive content are either good, bad, or otherwise because we don’t believe those words are more than labels based upon an individual’s perception of another. Our organization views people for what they are: humans. Everything else is merely a means by which to divide us into opposing factions.

We take full responsibility for this outrageous lack of leadership, for which there is no excuse, though there is an explanation we’d like to put forward in the interest of transparency. We are not a large organization, and we’ve invested much time and sacrifice trying to undertake an endeavor that is much greater than we have the resources or team members to focus on at the capacity needed… (source)

I noticed that they didn’t mention whether their social media manager had been fired or not.

Instead of leaving it at that, they added more to their response as social media erupted over their horrible series of tweets, citing irony in the most ironic way possible.

As an organization, we’re doing everything in our ability to make our official position known and remove all content espousing such hateful, insensitive, and offensive viewpoints. Beyond that, what people choose to believe about our organization despite our efforts are up to them. If the actions of one individual give cause for others to condemn the whole our organization, the work we’ve done, and what we have the potential to do in the future; no response or remedy is going to matter.

What’s becoming obvious is that the risky proposition of continuing any endeavor, charitable or otherwise, in an environment where perfection is expected without a single misstep, is tenuous indeed. No good or progress within society is attainable wherein forgiveness is not attainable. It saddens me that there are people who will allow a single bad act to negate more than a decade of positive impact and humanitarian accomplishments, but nonetheless, we respect peoples’ right to form their own code of conduct and worldview.

It’s rather ironic that, in the same irrational generalization that denounced an entire sect of people, rightly offending a great many, the response by many has been to also measure the sum totality of our organization by its tweets. I point this out not as an excuse, but to highlight how divisive and impractical it is to achieve anything productive when groups take precedence over human individualism.(source)

This isn’t the first time the Left has been happy about a tragedy.

Personally, I’m having flashbacks to the Gatlinburg fire, when a bunch of “progressives” tweeted gleefully about how well-deserved the tragedy was for those who were pro-Trump during the election.

People who dislike Trump seem to think that the Gatlinburg fire is just desserts for the locals in Tennessee who voted for Donald Trump. I’ve written previously about how those protesting Trump’s election really feel about the people they believe caused Hillary Clinton’s defeat, but this takes things to a sub-human low.

But people are actually out there laughing about Trump supporters’ houses burning down in the Tennessee fires, and even star Michael Ian Black is making glib, dickish jokes about it.

Check out the whole sad, disgusting report here and weep for humanity.

From a prepper point of view, keep in mind that these smug, superior individuals will be the ones that feel entitled to your food and emergency supplies. While they like to portray themselves as tolerant and kind to minorities and immigrants, don’t be fooled. Their scorn for working-class, middle America couldn’t be more blatant. (source)

What a sad state of division we are in when even tragedy doesn’t pull us together. It makes you wonder if we can ever again be united.

Thankfully, the people of the Gulf states are working hand in hand to aid the official response. In fact, Texas has been the kind of wonderful example of dignity and self-reliance that makes me proud to be an American.

There are many heartwarming stories of the Cajun Navy rescuing people trapped in their homes and even one of them pulling an elderly woman who was floating face down in the water and resuscitating her. Neighbors are helping neighbors, and people from all over are coming to help.

With the level of devastation (and it isn’t over yet) it may take a while. But I know that Texas will recover from this devastating disaster.

Please download this free E-book about what to do after a disaster like Hurricane Harvey. In it, you’ll find information on seeking shelter after a disaster, how to replace important documents that may have been destroyed, and warnings about potential health hazards after a flood.