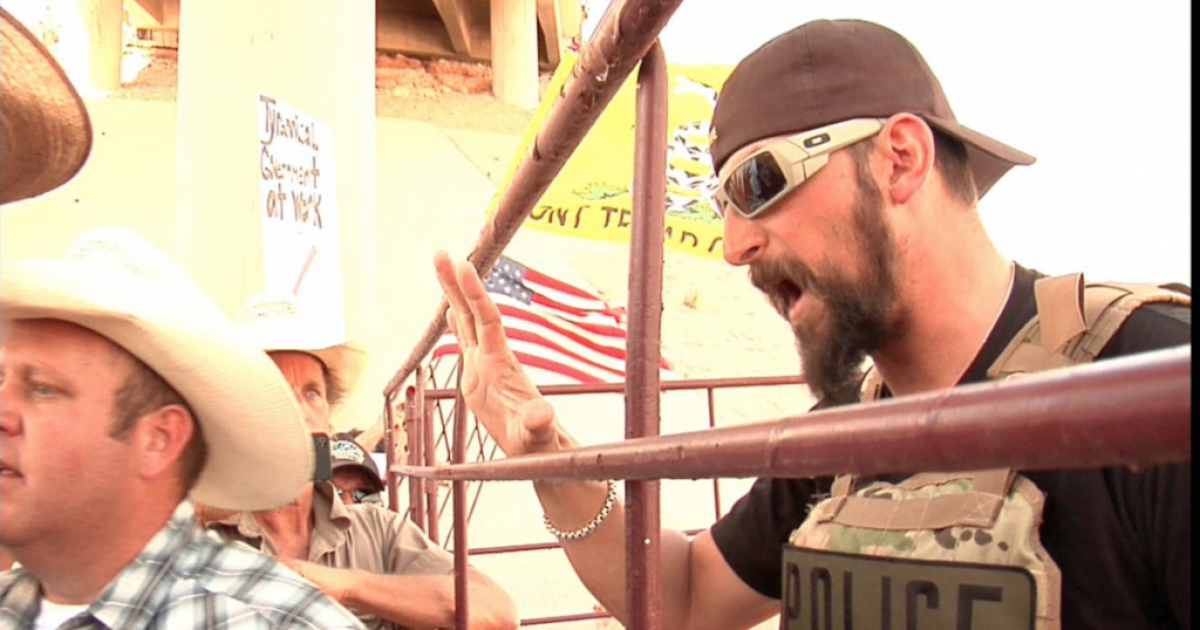 The prosecution in the Bundy Ranch case were found to be withholding information that would substantiate the defense’s case that the Bureau of Land Management goons, under the direction of Agent Daniel P. Love, were not at Bundy Ranch to carry out a lawful court order, but were, in fact, going into tactical mode in order to murder innocent civilians.

On Monday afternoon the Department of (In) Justice and prosecutor Steven Myhre refused to turn over audio recordings that they are suspected of being in possession of between Special Agent In Charge Daniel P. Love, BLM sniper teams, other tactical personnel, and possible informants who were at Bundy Ranch as far back as March 2014.

These recordings are vital to the defense in that the indictment against rancher Cliven Bundy and his co-defendants specifically states that Mr. Bundy and several others told lies and exaggerated the situation between Bundy and the BLM for the purpose of recruiting gunmen to come and help get the rancher’s cattle back. Up and until the first trial which began last February, the BLM denied the use of snipers and other tactical personnel during “Operation Gold Butte” the BLM’s official name for the Bundy Ranch cattle impoundment.

In dash-cam video made public during the first two trials you can clearly hear cross-talk in the background asking agents to move communications to TAC-Le Channel (329) while communicating with ICP communications director Toni Suminski, [SAC] Daniel P. Love, snipers on the mesa, and other BLM tactical gunmen in the wash. Toni Suminski testified in court under oath in the first Bundy trial that recordings of those transmissions were lost after the the hard drive running the recording software had mysteriously come un-plugged during the protest on April 12, 2014. Defense teams are now asking for recordings captured before that date ..

Suminski also admitted under oath she had shredded garbage bags full of documents concerning Operation Gold Butte that were found in a dumpster at the ICP – saying it was “routine” for her to do that.

TAC LE Channel (329) was never mentioned in documents provided to the defense or on any of the documentation outlining “Operation Gold Butte” plans. The information was brought to light after a researcher listening to background chatter on dash-cam video made public during the last trial – brought it to the attention of defense attorney’s [sic].

If you recall, Eric Parker was made famous for taking his defensive position on an overpass as seen below.

One of the charges he faces is tied to this position, even though numerous snipers were called in by the BLM, presumably under the direction of Love to take him out, and possibly others.

United States Park Service sharp-shooter Alexandria Burke, who was positioned to do that very thing said that she and other snipers were to attempt to get a clear shot to “eliminate” Parker.

And just to be clear, the reports of BLM snipers is not new. We reported on it when it took place, but here is a picture for the Mesa above Toquop Wash at Bundy Ranch on April 12, 2014.

Now, before you claim that the snipers came in after Parker had positioned himself, consider why he was doing so. I believe live footage has more of an impact than mere words, so consider how the BLM goons were conducting themselves and violating all sorts of constitutionally protected rights of citizens in this video.

Interestingly enough, Jordan, who has been covering the Bundy Ranch trials due her history in journalism and her involvement with the Pete Santilli Show, said that jurors found Burke’s testimony to not be truthful, and according to Jordan, “Burkes tearful testimony in the last trial saying her testimony was uncomfortable and that she embarrassed herself and Law Enforcement.”

More evidence of how Love was handling things at Bundy Ranch include the following evidence, which the prosecution did not want the jury to see.

Here’s verifiable proof that the BLM killed many heads of cattle that belonged to Cliven Bundy and his family and then sought to cover it up in mass burials. Following the BLM backing off after alternative media brought attention to what was going on and fellow Americans stood alongside the Bundys, here’s what was discovered. Ask yourself if this was “lawful action” by the BLM.

Here’s the mass graves that were dug.

Here’s photos of one cow that was killed by the BLM and it’s clear they were shot.

Here you can see as the Bundys retrieve their dead cattle from the mass grave.

Listen to journalist Ben Swann’s report on this with Ryan Bundy.

As for misconduct by the BLM agents, take a look at this action by the agents, and don’t forget they also sought to impose a “First Amendment Zone,” something that is unlawful under our Constitution.

Love has been found guilty by the Inspector General of misconduct, he has ordered the scrubbing of emails that were subpoenaed, has stolen evidence for himself that he used such heavy handed tactics against Dr. James Redd for finding, that Redd eventually killed himself. Additionally, Love has used his position to acquire tickets to the pagan festival known as the Burning Man.

He’s a real piece of work, continues to be employed at the BLM, is the prosecution’s star witness, but they won’t let him take the stand, and is being protected by the prosecution and Judge Gloria Navarro.

It’s because he’s corrupt. He’s a vile man who knows nothing of honor and the upholding of the Constitution or the law. His actions are more lik the Nazi SS, and yes, every single agent who obeyed his orders are the same way. None of them stood up to him and denied his orders. They just followed along like good little Nazis.

The US Attorney’s office in Utah will not prosecute Daniel P. Love for his crimes, but will go after law abiding citizens like Eric Parker, Cliven Bundy and his sons, and reporter Pete Santilli because they are threat to their tyranny.

Jordan went on to report, “Rand Stover, second in command to Dan Love during Operation Gold Butte, and a key prosecution witness, was also involved in a scheme to broaden the scope of hiring practices for Daniel P. Love’s department so that Love’s friend Mark Jucca could be hired over more qualified applicants for a job with the BLM. This information was also held back from the defense by Prosecutor Myhre.”

“Defense attorney’s contemplate that TAC LE channel (329) was used throughout the operation from the beginning and could likely reveal much needed information that would contradict the Governments insistence that Cliven Bundy and others conspired to lie to the public to get them to come to Bundy Ranch and join in a “massive armed assault” using a made up story about the aggressiveness of BLM special forces who were assaulting the Bundy family even before the impoundment began,” she added. “They are asking for the recordings of radio transmissions from TAC LE Channel (329) dating back to March of 2014, and so far the Government has refused those request.”

On Tuesday, Jordan posted that Judge Navarro has made a special request that may have tremendous ramifications for Eric Parker and Scott Drexler, the two men whom the prosecution wants to retry a third time. She wrote:

It is not clear why Navarro has ordered both tiers to be present — with her track record in this case it could be good news or bad — We will just have to wait for Thursday’s hearing to find out:

IT IS HEREBY ORDERED that the Tier 1 Defendants (Cliven Bundy, Ryan Bundy, Ammon Bundy, Ryan Payne, and Peter Santilli) and the remaining Tier 3 defendants (O. Scott Drexler and Eric Parker) shall appear for a Status Conference on 8/31/2017 at 8:30 AM in LV Courtroom 7C before Chief Judge Gloria M. Navarro. The Court previously set this hearing for the Tier 3 defendants at 9:30 a.m. The 9:30 a.m. hearing is vacated in light of the 8:30 a.m. hearing.

Defendant Drexler’s and Parker’s physical presences at the status conference are waived. Mr. Parker and Mr. Drexler may appear telephonically by calling the Court’s conference line.

Jordan spoke with Freedom Outpost via phone on Tuesday evening and said that political prisoner and reporter Pete Santilli said he was “cautiously optimistic” that Parker and Drexler would be released and not tried again.

She told us that it was highly unusual to all in Tier 1 and Tier 3 defendants together, but that will take place on Thursday.

Lord willing, Jordan will be joining me on The Sons of Liberty radio show on Friday at 2pm CST for the hour to update everyone on the outcome and any new information coming out of Nevada. Click here to catch the show.