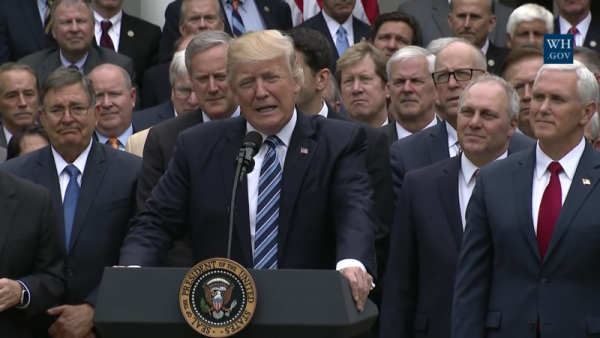 It has become exceedingly clear that we need to try to remove as many establishment Republicans from Congress as we possibly can in 2018. Even though the Republicans are in control of the White House, the Senate and the House of Representatives, the “Make America Great Again” agenda is not being implemented, and the blame for that lies entirely with the RINOs (Republicans in name only). Obamacare still has not been repealed, the wall has not been built, and now there is talk that the RINOs plan to block Trump’s tax reform bill. It was expected that the Democrats would try to obstruct Trump’s agenda, but Trump’s biggest problem so far in his presidency has been his fellow Republicans. If they won’t go along with what he is trying to do, we will kick them out and put in people who will.

On Wednesday, Trump delivered a major speech in which he boldly declared that we have a “once-in-a-generation opportunity” to implement tax reform.

And he is exactly right. The Republicans have not often had simultaneous control of the White House, the Senate and the House of Representatives, and so they should be attempting to push through as much of Trump’s agenda as possible.

During his speech, Trump outlined four basic principles that he intends to follow when it comes to tax reform. First of all, he believes that the tax code should be much simpler…

Here are my four principles for tax reform: First, we need a tax code that is simple, fair, and easy to understand. (Applause.) That means getting rid of the loopholes and complexity that primarily benefit the wealthiest Americans and special interests.

This is something that we should all be able to agree with. Right now the tax code is more than 2 million words long, and the regulations add another 7 million words. I once spent an entire year studying tax law, and at the end of that year I came to the conclusion that the best thing that we could do would be to throw the entire tax code in a shredder and start over.

In addition to simplifying things, Trump also wants to implement changes that will create more jobs for U.S. workers…

Second, we need a competitive tax code that creates more jobs and higher wages for Americans. It’s time to give American workers the pay raise that they’ve been looking for for many, many years.

Cut the rate so it is competitive with other countries. (15% makes us even with Canada’s federal rate.) Cut the rate so that it can create jobs. Cut the rate to encourage people to start new businesses, hire more people and grow. According to a 2016 Tax Foundation analysis of then-candidate Donald Trump’s tax plan, comprehensive reform, including lowering the corporate rate to 15%, could create around 2 million new jobs.

The third principle for tax reform is a crucial one: tax relief for middle-class families. (Applause.) In a way — and I’ve been saying this for a long time — they’ve been sort of the forgotten people, but they’re not forgotten any longer. I can tell you that. (Applause.)

For years, I have been detailing the demise of the middle class in America. The middle class became a minority of the population for the first time ever in 2015, and each year it continues to shrink.

Cutting taxes on the middle class won’t solve our problems, but it would be a positive step in the right direction.

Lastly, Trump wants to repatriate trillions of dollars that are currently being held offshore by U.S. companies…

Fourth and finally, we want to bring back trillions of dollars in wealth that’s parked overseas. Because of our high tax rate and horrible, outdated, bureaucratic rules, large companies that do business overseas will often park their profits offshore to avoid paying a high United States tax if the money is brought back home. So they leave the money over there.

The amount of money we’re talking about is anywhere from $3 trillion to $5 trillion. Can you believe that? By making it less punitive for companies to bring back this money, and by making the process far less bureaucratic and difficult, we can return trillions and trillions of dollars to our economy and spur billions of dollars in new investments in our struggling communities and throughout our nation.

Personally, I would be in favor of giving companies a limited window to bring all of that money into the country for free. It would potentially be a tremendous boon for the economy, and hopefully President Trump will be able to get this done.

Unfortunately, the establishment Republicans in Congress seem absolutely determined to obstruct what Trump is trying to do every step of the way. This is a point that Rush Limbaugh made very succinctly on his program just the other day…

Limbaugh flayed Republican lawmakers for betraying the people who elected them.

“The Republicans have a chance to do everything they said they’d do,” he explained.

“They haven’t gotten one thing done legislatively. Tax cuts, the Democrats can’t stop. Folks, they have an opportunity do everything they have been promising to do. A once-in-a-career opportunity. They’re never gonna have this kind of power. And what are they doing? Nothing. In fact, it’s worse than nothing. It appears to outsiders that they are part of the effort to thwart and stop Trump. Do they think this kind of behavior is going to be rewarded with re-election? Do they think that the American voters are gonna blame all of this on Trump and re-elect Republicans and try to get rid of Trump?”

As we approach the mid-term elections in 2018, it is going to be very important for Republican voters to determine who is in the pro-Trump camp and who is in the anti-Trump camp. It simply is not good enough for someone to have an “R” next to their name anymore. We need to send good pro-Trump candidates to Washington, and that is one of the reasons why so many people are getting so excited about my campaign.

And the key is the Republican primaries next spring. Only a small minority of the population votes in primaries, and if we can get pro-Trump forces galvanized, we can kick out a whole bunch of these RINOs.

But if pro-Trump voters don’t support the pro-Trump candidates that are out there, when we get to November 2018 we won’t even have anyone to vote for. Instead, we will be stuck choosing between Democrats and anti-Trump Republicans.

If you have read my new book, then you already know how determined I am to implement the elements of the “Make America Great Again” agenda. If we do nothing, we are going to get more of the same, and that simply is not acceptable. For example, it is being reported that Americans now spend more on taxes than they do on food and clothing combined…

Americans on average spent more on taxes in 2016 than they did on food and clothing combined, according to data released this week by the Bureau of Labor Statistics.

The same data also shows that in three years—from 2013 to 2016—the average tax bill for Americans increased 41.13 percent.

If you like the status quo, then feel free to do nothing.

But if you are sick and tired of the way that things are, please support President Trump and the pro-Trump candidates that are running for office all over the nation. It isn’t going to be easy, but if we work together I believe that we can do some truly remarkable things.