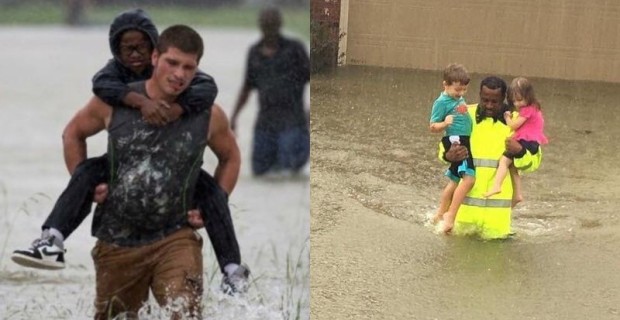 Many on the left are triggered by rescue efforts in the aftermath of Hurricane Harvey because it demolishes their narrative that America is a racist country.

The most widely shared images on social media out of Texas show people of all races helping each other deal with the catastrophe.

Even a man with a Confederate flag was helping to save black people.

The guy with the Confederate flag on his boat is saving everyone. Blacks, whites. Everyone. #Meyerland #Harvey pic.twitter.com/SRswaO7aTk

In the video below, an African-American and former cop protects his community from looters.

This spontaneous outpouring of community spirit and color-blind resilience has infuriated some on the left because it has completely eviscerated their race-baiting narrative that America is deeply divided, emphasizing how most of that division is being contrived by the media and far-left political movements.

Left-wing Slate writer Katy Waldman, who was first triggered by the photograph below of a white man saving an Asian woman, asserted that “Houston doesn’t showcase America at its best” because….reasons (all of which appear to be pretentious waffling).

After a backlash, Waldman deleted her tweet and changed the headline of her article.

Meanwhile, Politico chose to respond to the catastrophe by mocking the victims of the hurricane.

They posted a cartoon of a white man wearing a Confederate flag shirt and his daughter being rescued that mocked their faith in God and thanked the government for rescuing them. The image was soon deleted.

Hey @politico – why did you delete this? pic.twitter.com/IVgMXGMPjS

The only group to separate #Harvey victims by color, race or national background . Everybody else is just saving people #NoSurprise #Racist pic.twitter.com/lrZr5F9RCH

“The only group to separate #Harvey victims by color, race or national background . Everybody else is just saving people,” remarked actor James Woods.

The Alt-Left on Twitter has also feverishly expressed their desire to see the catastrophe impact only white people.

People who effectively have said they wanted those children to die pic.twitter.com/Azdud8TNHM

The usual suspects, outlets like the Root and the Huffington Post, also tried to gloss over the powerful uniting force that the disaster has had by attempting to make it all about race and anti-Trump hysteria.

The fantastic, heartfelt, heroic and color-blind reaction that Hurricane Harvey has elicited has rendered the Alt-Left furious.

Basic authentic reality has once again wrecked their fake moral panic and ruined their frenzied claim that America is on the brink of a race war.

All this is not to say that racism doesn’t still in exist in America, but the notion that Americans are so divided that they are ready to choose sides in a “civil war,” as Salon.com asserted earlier this week, is patently ridiculous.