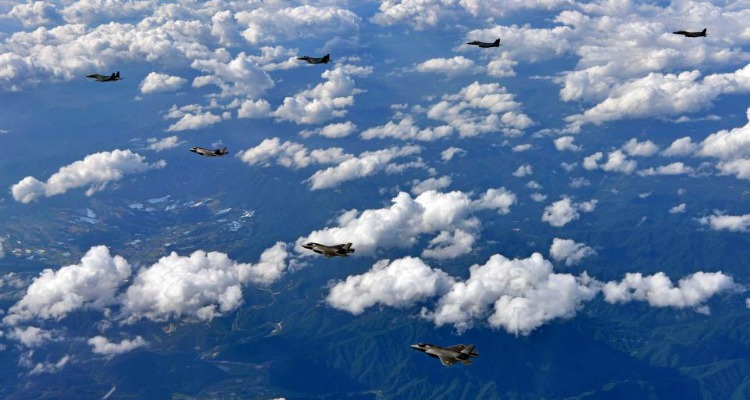 It’s getting real on the Korean peninsula. In an aggressive move, the US dropped bombs at the North Korean border in a joint exercise with South Korean forces, using jets that are capable of carrying out a nuclear strike.  The world is watching, and some countries are publically choosing sides.

The exercise is intended to send a strong message after North Korea’s recent launch that sent a ballistic missile over Japan. According to President Trump:

The U.S. has been talking to North Korea, and paying them extortion money, for 25 years. Talking is not the answer!

According to many reports, this exercise was a direct response to North Korean aggression:

THE US staged their own terrifying show of might today by dropping giant bombs near the North Korean border  – days after Kim Jong-un’s latest missile outrage.

In a statement, the US air force said its bombers flew out of Andersen Air Force Base in Guam and four stealth fighter jets from a US Marine Corps base in Japan.

They conducted a shocking bombing attack, which simulated a surgical strike of key enemy facilities, over the Pilseung Range in the eastern province of Gangwon – which neighbours North Korea. (source)

North Korea remained defiant after the US dropped bombs.

Unsuprisinging, Kim Jong Un did not back down due to the show of force. According to the Korean Central News Agency (KCNA), the North Korean leader had quite a lot to say about the exercise.

KCNA promised future launches “targeting the Pacific, where the US imperialist aggressor forces’ bases are stationed.”

“It should not be forgotten even a moment that the whole of South Korea can turn into ruins,” the statement added…

And added that “no one can guess when a nuclear war may break out“.

The statement from Kim’s mouthpiece added: “The USA’s more persistent moves to launch a nuclear war on the Korean peninsula would precipitate its final doom.”

…Kim has vowed to fire more missiles as pictures emerged of the despot cackling maniacally as he over saw the launch described as “just a curtain-raiser”.

Just one day after his latest launch brought his country and American one step closer to war the smirking communist called for more weapons testing over the Pacific to advance his country’s ability to contain Guam. (source)

(“Cackling maniacally.” Let’s be honest. No one has quite the same way with words as a UK reporter.)

The nuclear threat is NOT going away.

A few weeks back, nuclear preparedness supplies were selling out all over the internet. Since then, sales have dropped off because people seemed to have been lulled into a sense that the threat was over.

Those people are wrong.

The threat of nuclear war is not going away anytime soon. In fact, it has just escalated once again. They cited Jeffrey Lewis, director of the East Asia Nonproliferation Program at the Middlebury Institute of International Studies at Monterey.

Lewis believe these sites are the real targets, because they all have a legitimate military purpose. Other analysts add Offutt Air Force Base near Omaha, home to U.S. Strategic Command, and Whiteman Air Force Base in Missouri, the point of origin for nuclear-capable B-2 stealth bombers.

Still others think Kim might target Seattle and San Francisco, the two largest West Coast population centers that would be the easiest to reach from North Korea.

“It’s not like there is an answer written down in a little book,” Lewis said. “The North Koreans have a kind of articulated strategy, and they’ve shown some scary stuff, and we’re left to sort of piece together what all that means.” (source)

Are you prepared for nuclear war?

So…it really seems that now is not the time to slow down on preparing for the potential of a nuclear strike. While many people firmly believe that any strike on American soil will not actually be North Korea and will only be blamed on them, when you see a mushroom cloud on the horizon, who to blame will be the last thing on your mind.

It’s important to remember that even if you live nowhere near one of those targets, the entire country is likely to be affected in many ways should such an event occur:

For all of these things, regardless of where you live, being well prepared is a good idea. Here are some things you should do:

Most importantly, do it now. Stop being lulled into a false sense of security every time the news focuses on other topics. And understand that this will go far beyond a few strikes between two countries. You need to get prepared for the long-term.

This could lead to World War 3.

While people are focused on North Korea, many are not considering the country’s powerful allies. Like Russia, for example.

They recently sent nuke-capable bombers on warning flights as well.

Russian nuclear-capable Tupolev Tu-95MS strategic bombers, accompanied by Su-35S fighter jets and an A-50 airborne early warning aircraft, have carried out a patrol in close vicinity to the Korean Peninsula prompting the Republic of Korea Air Force (ROKAF) and Japan Air Self-Defense Force (JASDF) to scramble their fighter jets on August 24.

The bomber patrol coincided with a joint South Korea-U.S. military exercise, Ulchi Freedom Guardian 2017, which began on August 21 and will continue through August 31. Russia has publicly expressed concerns over the wargames. The bomber mission is seen as an attempt to signal Russian displeasure with both South Korea and the United States.

“The U.S. and South Korea holding yet more large-scale military and naval exercises does not help reduce tensions on the Korean peninsula,” a spokeswoman for the Russian Ministry of Foreign Affairs said on the same day the bomber patrol was conducted. “We urge all sides to exercise maximum caution. Given the arms build-up in the region, any rash move or even an unintended incident could spark a military conflict.” (source)

China has also made some strong statements about the war games of North Korea and its opponents.

China won’t come to North Korea’s aid if it launches missiles threatening U.S. soil and there is retaliation, a state-owned newspaper warned Friday — but it would intervene if Washington strikes first. (source)

China refused to condemn the North Korean missile test over Japan, and instead, asked all sides “to exercise restraint and remain cool-headed.” (source) They have also vocally opposed sanctions on North Korea.

On August 29, Hua claimed that “we don’t think threat, pressure or sanction can offer a final solution to the issue.”  On August 30, she emphasized again that the Korean Peninsula issue has entered “a vicious spiral of nuclear and missile development vis-a-vis sanctions and pressure” and called for “dialogue and peace talks.” (source)

Australia, who is under some degree of threat by North Korea, has asserted that they will ally with the United States should military action occur.

In a statement to the radio station 3AW, Australian Prime Minister Malcolm Turnbull said Friday that if North Korea launches an attack on the United States, Australia would have America’s back.

It’s pretty obvious that the world is picking teams. If war were to break out between the United States and North Korea, the whole world would soon be involved. Of course, the warmongers in Washington DC are rubbing their greedy little hands together, because this means they’ll get very, very rich. (Read this to learn more about the military industrial complex and you’ll understand why politicians just love war.)

But while the rich get richer, for the rest of it, a global conflict would be the most horrifying thing we’d see in our lifetime. With the advances in weaponry since the last World War, the death toll would be unimaginable. We all need to get prepared for a long-term crisis that will affect every facet of our lives.