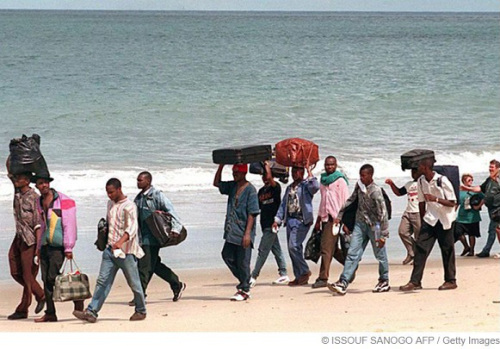 It is not enough that the European Union (EU) opens its doors to “refugees” and “migrants” from Muslim and African countries. Now, an insane agreement made between four EU countries (France, Germany, Italy and Spain) and the African countries of Chad and Niger will ensure that Europe will be flooded with even more by making it easier for Africans to attain political asylum in Europe.

What this means is that no longer would Africans have to actually leave Africa and make the journey to Europe to apply for political asylum. Under the new agreement, “particularly vulnerable migrants” (whatever that means) can apply for and be granted political asylum in situ — that is, while they are still in Africa before they are “migrants”!

And to top it off, the objective of the agreement ostensibly is to help Chad and Niger with border control to stem migration to Europe.

Henry Samuel reports for The Telegraph that on August 28, 2017:

“France, Germany, Italy and Spain . . . at a summit in Paris . . . agreed on a new policy to grant asylum to vulnerable migrants who apply for protection while in Africa instead of their destination countries.

President Emmanuel Macron of France, Chancellor Angela Merkel of Germany met with Italian and Spanish leaders as well as those of Chad, Niger and Libya – all three of them transit countries for migrants. EU foreign policy chief Federica Mogherini also attended . . . .

The process would allow migrants to immigrant legally to Europe if they are on an eligibility list provided by the UN refugee agency and registered with authorities in Niger and Chad . . . .

Nearly 120,000 migrants, including refugees, have entered Europe by sea so far this year, according to the International Organization for Migration.

In addition, the president of the European Parliament, Antonio Tajani, said that in the long-term, the EU should invest €50-60 billion in Africa in order to develop economies so that people are less likely to want to reach Europe.

“This means a flood of asylum seekers like the world has never seen before, as the signal effect has probably reached the entire African continent already. It is the end of Europe as we know it.

The agenda and the objective for the insane mass migration inflicted upon us by traitors: Culture clashes -> wars -> depopulation -> ending the wars -> introducing the UN’s NWO.

You better start to believe it, cause it’s clearly coming.”