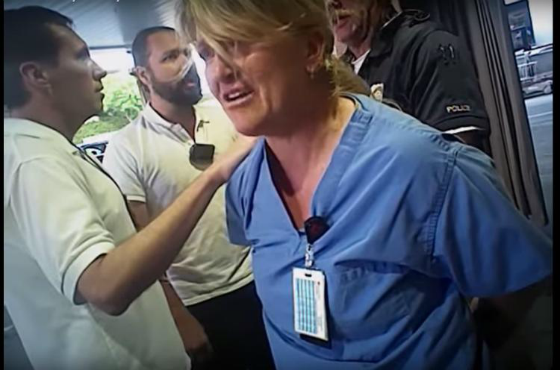 Whipping like wildfire across the internet is arguably one of the more shocking incidents of brute force displayed by law enforcement in the United States — indeed, a rare characterization, given American policing’s interminable list of killings, beatings, corruption, lies, and general misbehavior — because, this time, the subject of a bully cop’s strong-arm tactics was a nurse.

A nurse, just doing her job.

The nurse, Alex Wubbels, doing her job in Salt Lake City’s University Hospital, tried to protect an unconscious patient from having their blood drawn without their ability to consent or refuse, by the order of Salt Lake City Police Detective Jeff Payne — whose demands unequivocally violated her employer’s strict policy against drawing blood from unconscious patients without warrant, prior consent, or unless the patient is under arrest — which would have supplanted said rule.

“I’m just trying to do what I’m supposed to do,” Wubbels told the detective on the July 26th video, released late Thursday by the Salt Lake Tribune.

As Payne’s body camera records their rapidly escalating encounter, Wubbels can be seen holding papers and a cell phone, over which it becomes clear a man named “Brad” has been listening over speakerphone — as he, too, tries to reason with the brash detective, explaining the orders for forcible blood draw must come from proper channels.

Unamused, Payne persists — even as Wubbels grows visibly nervous and unsure how to handle the irate detective.

“This is something that you guys agreed to with this hospital,” Wubbels tells Payne. “I’m just trying to do what I’m supposed to do. That’s all.”

“So I take it, without those in place, I’m not going to get blood,” he retorts. “Am I fair to surmise that?”

From the cell phone, Brad is heard telling the nurse, “Alex, you’re not representing the University Hospital.”

“I have no idea why he’s blaming me,” Wubbels, shaking, responds softly.

Sternly, Brad interjects, “Why are you blaming the messenger, sir?”

“She’s the one that has told me, no,” Payne replies.

Understandably startled to be manhandled and intimidated by the detective who apparently didn’t understand the law or policy, Wubbels recoils reflexively from his clutches, turning from the impending detention in disbelief — but, Payne pursues her roughly, backing the nurse around equipment and into a uniformed officer’s arms, and then outside.

With body camera rolling, the nurse screams in agony at Payne’s clutch on her arm, now held fast behind her back, “Help! Help! Somebody help me! Stop! Stop! I did nothing wrong!” Hospital employees are seen congregating and attempting to quell the detective’s rage, telling him an administrator is en route to mediate.

“She can sit in my car while they’re coming,” Payne assures them.

“This is unnecessary, man,” someone asserts — to which the cop replies, “You’re right.”

Wubbels has obtained an attorney, saying she was illegally arrested and assaulted; although, no lawsuit or claim has yet been filed — but there are no shortage of odd facets to this interaction on video.

For one, the unconscious patient never was a suspect in any crime, and would be considered the victim in this case, as RT reports, since “[he] was driving a semi-truck on July 26 when a suspect, fleeing Logan, Utah police in a hot pursuit, swerved and slammed his pickup truck into [him], igniting an explosion that left [him] burned. The suspect, Marco Torres, died at the scene.”

Forced blood draws and testing have not been deemed acceptable by the U.S. Supreme Court, and certainly not in a situation where the subject isn’t the suspect.

Although remaining on active duty, Payne has been temporarily removed from the Salt Lake City Police blood-draw program, pending the conclusion of an internal investigation into the incident, according to Sergeant Brandon Shearer.

Should Payne go unpunished for the shocking, wrongful arrest, a grim portent would exist both for workers going about their duties, as well as the innocent public leery of having law enforcement attempt robbery of their blood under conditions where such an act would never be allowed.

Wubbels, who is still coming to terms with the incident, has one warningfor the public: