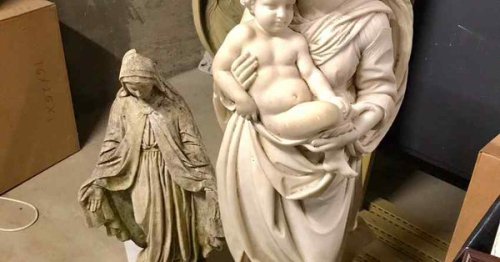 Founded in 1850, San Domenico Catholic School in San Anselmo in the San Francisco Bay Area serves 671 students grades K-12, and is California’s oldest independent school and first Catholic school. The school is not an archdiocesan school, but an independent school sponsored by the Dominican Sisters of San Rafael.

In an effort to make the Catholic school more “inclusive” and less “alienating” to prospective students, the school recently removed 162 Catholic statues and icons, including a statue of the Virgin Mary and baby Jesus. The statues were stored in the school’s basement or donated to “appreciative recipients”.

Chair of San Domenico School’s board of trustees Amy Skewes-Cox justified the relocation and removal of some of the school’s 180 religious icons as “completely in compliance” with San Domenico’s new strategic plan:

“If you walk on the campus and the first thing you confront is three or four statues of St. Dominic or St. Francis, it could be alienating for that other religion, and we didn’t want to further that feeling.”

Nor is the Catholic school offering Catechism classes. Head of School Cecily Stock said the year before last the school began offering catechism after school and then last year phased it out entirely because:

“We had very few families interested. I think last year it was fewer than five. It just made sense to have the students prepare for communion with their local parishes where they would be with a larger group of students. Over the last few years we’ve had fewer Catholic students as part of the community and a larger number of students of various faith traditions. Right now about 80 percent of our families do not identify as Catholic.”

Instead of teaching students about Catholic theology and doctrines, San Domenico provides students with instruction in world religions and philosophy because truth is relative and subjective:

Outraged parent Shannon Fitzpatrick, who has an 8-year-old son enrolled at the school, sees the removal of the statues as a steady erosion of the San Domenico’s Catholic image. In a letter to school officials, Fitzpatrick wrote:

“Articulating an inclusive foundation appears to mean letting go of San Domenico’s 167-year tradition as a Dominican Catholic school and being both afraid and ashamed to celebrate one’s heritage and beliefs. In our time here, the word ‘Catholic’ has been removed from the mission statement, sacraments were removed from the curriculum, the lower school curriculum was changed to world religions, the logo and colors were changed to be ‘less Catholic,’ and the uniform was changed to be less Catholic.”

So what would be the point for Catholic parents to send their kids to San Domenico?