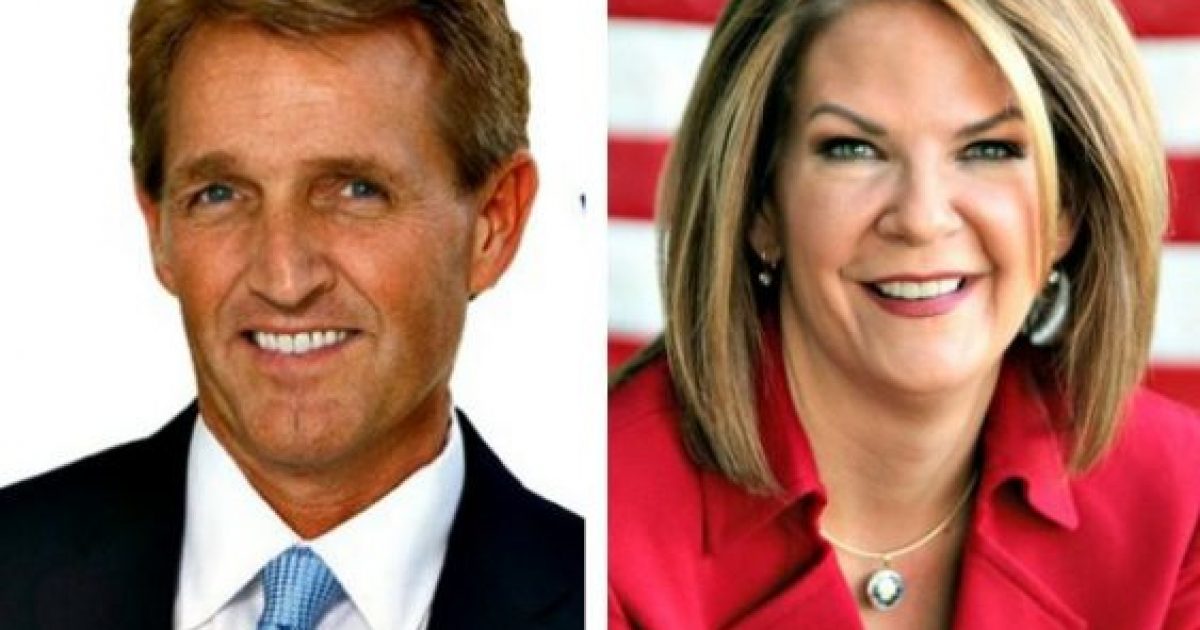 It looks like Republicans and Democrats who are opposed to President Donald Trump’s stated agenda are now being targeted for removal from DC.

The latest was Senator Claire McCaskill of Missouri, as Trump spoke about tax reform and told an audience of Missourians, “So we must, we have no choice, we must lower our taxes. And your Senator, Claire McCaskill, she must do this for you. And if she doesn’t do it for you, you have to vote her out of office.”

However, a particular Arizona senator is now feeling the effects of going against Trump.

In an interview on Fox News’ “Sunday Morning Futures” with Maria Bartiromo, Ward said the “establishment wing of the Republican party” is making a “big mistake” by challenging Trump.

“I certainly think that would be a big mistake for the establishment wing of the Republican party to attempt,” Ward said.

“I think President Trump and his leadership is what the country wanted. That’s why he’s in the White House. And I think that he’s got lofty goals that we should accomplish that will put America first,” Ward added.

Ward has the backing of President Trump.

Trump tweeted in mid-August, “Great to see that Dr. Kelli Ward is running against Flake Jeff Flake, who is WEAK on borders, crime and a non-factor in Senate. He’s toxic!”

Great to see that Dr. Kelli Ward is running against Flake Jeff Flake, who is WEAK on borders, crime and a non-factor in Senate. He's toxic!

Indeed, Flake is toxic, as toxic as John McCain.

And just how toxic?

After Trump pardoned former Maricopa County Sheriff Joe Arpaio, who was found guilty by a judge, not a jury, as the Constitution demands, Flake joined the chorus of establishment Republicans and Democrats in berating Trump’s decision by stating, “Regarding the Arpaio pardon, I would have preferred that the President honor the judicial process and let it take its course.”

The President…shall have Power to grant Reprieves and Pardons for Offences against the United States, except in Cases of Impeachment. –ARTICLE II, SECTION 2, CLAUSE 1

Flake claims to be conservative, but he had hardly demonstrated it, as seen in this video.

Flake is somewhat conservative, according to his voting record, but honestly, it’s nothing to write home about.

“Unfortunately, we have a lot of people in Washington, especially in the Senate, who like to talk a lot, but don’t like to get a lot of things done,” Ward said. They “haven’t been able to collaborate with each other, House to Senate, within the Republican party to accomplish the agenda that the American people are crying out for.”

“I think the president and his leadership will go a long way, if we can get the leader in the House and the leader Senate to come together and accomplish those goals that America wants,” Ward added.

Following his siding with Songbird John McCain on the infamous “Gang of Eight” amnesty bill, Flake and McCain were targeted by citizens of Arizona for recall, and he was surprised. Sorry, that’s not a conservative position and neither is the one against Arpaio.

Speaking of Arpaio, the newly pardoned former sheriff is also considering a run for Flake’s seat.

“I could run for mayor, I could run for legislator, I could run for Senate,” Arpaio said concerning a possible run against Flake. “I’m sure getting a lot of people around the state asking me … All I’m saying is the door is open and we’ll see what happens. I’ve got support. I know what support I have.”

Whether Arpaio will actually run or not is to be determined. Perhaps he will either give substantial support to Ward or she may drop out and lend her’s to him. Either way, it seems a win for Arizona.

Now, if Arizona could just do that same with Songbird McCain.

This is one of the things Ward points out.

Even though the Republicans possess a 52-48 majority in the Senate, they don’t have Republicans on the same page because many of them are RINOs.

She believes that electing more Republicans that actually believe in Trump’s agenda will help pass his agenda, and she could be right.

“I think Sen. Flake is going in the exact wrong direction, attacking the president at every turn,” Ward said. “But, remember, he’s been a Never-Trumper ever since the primary … and he certainly hasn’t been for the president since he’s been in the White House.”

Personally, I’m not a “for the president” person, as much as I am for the law. If the president strays from the law, he doesn’t get my support, but if he is pushing for the law to be followed, then I will support that.

This is what is needed in DC.