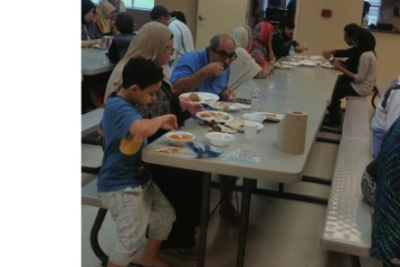 If you search the internet for “Houston mosque” or even simply “Houston,” nearly every mainstream media publication has multiple articles, being updated regularly, showcasing Houston area “mosques opening their doors to hurricane Harvey victims.” In fact, even so-called fact-checking website Snopes published an article on the matter, and not as a fact-checked one, but as a promoted news story. Many of these articles are centered on the issue that mosques opened their doors to evacuees, but Christian pastor Joel Osteen did not immediately open his megachurch doors. (Osteen later alleged that the surrounding streets were not open or safe; and the city never asked him to use the building as a shelter.) Personal feelings about Osteen aside, the media is using this as an opening to push the narrative that Muslims are the heroes of this hurricane, and the white people seeking solace were forever changed by the kindness and generosity of their Muslim neighbors.

A few issues with the story right from the start — it’s not the Houston mosques that are taking in these evacuees; it’s a few Houston Islamic Centers. Non-Muslims generally aren’t allowed in mosques, unless they are allowed entry for a reason like seeing how Muslims pray. We’ll get to that later.

The other part of the news story that is conspicuously hidden is that there were only 35 evacuees at the Champions mosque, also known as Masjid al-Salam, at the peak. As of Friday morning, 14 evacuees stayed on. The majority of those evacuees were Muslim. Brand Lane Center in Stafford, Texas claims to be housing 80 to 90 people currently. Whether those figures are accurate and whether those were families from the mosque or non-Muslim evacuees, nobody knows. The picture used in one of the articles about the Muslim heroes is a picture from the Convention Center. Out of an estimated 200,000 Muslims in the greater-Houston metro area, the headline-worthy news is that they were able to help about 125 evacuees.

Harvey, like all tragedies, brought out the best in people and proved once again that America houses some of the greatest and bravest individuals in the world. People of all races were going head-on into danger to save people of all races. The agenda-driven mainstream media knew they were in trouble after a video went viral where an understandably frantic mother at an evacuation center became frustrated with a CNN reporter “shoving microphones in her face.” Many shelters said they would not be letting any more news stations in because evacuees needed privacy. Then, suddenly mid-day Wednesday, CNN had one of the first front-page headlines that “mosques were opening their doors to evacuees.” Within a few hours USA Today, NPR, ABC News, and the other standard leftist media sites that masquerade as news all followed suit.

As mentioned earlier, this headline itself is incorrect. Rules regarding Muslims allowance of non-Muslims into their worshiping midst is debated among scholars. There is nothing in the Quran that explicitly denies non-Muslims from entering mosques, except the al-Masjid al-Haraam mosque in Makkah. Sheikh Muhammed Salih Al-Munajjid explains the standard of allowing non-Muslims into mosques:

“…it is permissible if it serves the interests of sharee’ah or meet a valid need, such as a person hearing something that may invite him to enter Islam, or because he needs to drink water in the mosque, or the like. This is because the Prophet (peace and blessings of Allaah be upon him) tied up (his prisoner) Thamaamah ibn Athaal al-Hanafi in the mosque before he became Muslim, and the delegations of Thaqeef and the Christians of Najraan stayed in the mosque before they became Muslim. There were many benefits offered by doing this: they could hear the speeches and sermons of the Prophet (peace and blessings of Allaah be upon him), see people praying and reciting Qur’aan, and other benefits that are gained by those who visit the mosque. (From Fatawa al-Lajnah al-Daa’imah, 6/276).

If some kuffaar ask to enter the mosque so that they can see how Muslims pray, so long as they have nothing with them that could make the mosque dirty, and there are no women among them who are dressed in a provocative fashion, or any other reason not to let them in, then there is nothing wrong with allowing them to enter and sit behind the Muslims so they can see how they pray. If we fear that there is someone who may rebuke them (for not praying etc.) without realizing that they are not Muslim, we should point this out to them.”

In short, Muslims can allow non-Muslims to enter mosques for the purpose of conversion. Items that would make the mosque “dirty” include crosses, bibles, or traditional Jewish head coverings. The Houston-area mosques have not returned comment whether or not non-Muslim evacuees who sought refuge were allowed to bring such items.

Second, the Masjid al-Salam Islamic center held “34-35 evacuees” when the crowd was at its largest and Stafford held “80-90.” The George R. Brown Convention Center housed approximately 10,000 people over the past week. No doubt, the convention center is drastically larger. But is letting under a few dozen people sleep in your gym and classroom headline-worthy? It is if you have a narrative to push.

Third, the way the media reported this story left out the fact that most of the evacuees being housed in the Islamic Centers and interviewed by the media were Muslim. The only non-Muslims showcased were one elderly African-American lady interviewed by the news, and another lady who claimed to be Catholic and her husband Jewish. The Catholic evacuee went on to state, “Muslims are just like any other type of person. They’re caring, loving, giving people.” The reporter apparently thought that asking questions about race was the only way to cover a news story about hurricane evacuees.

The same article went on to state that Muslim evacuees who were not staying at an Islamic Center, but staying at the convention center, have been “blocking off a small prayer space with chairs and their shoes.” Tragedy or not, this is a part of Islamic Supremacy we can expect to see more and more in the West. It made me chuckle because last weekend, I took the train from one large, urban East Coast city to another. At one of the stops, a group of Muslims got on the train. There weren’t any seats available together, but one of the women in the group needed to sit next to who I presumed to be her male escort. The group asked the conductor to move two random patrons next to each other to solve the problem. When the conductor declined, the group became very irate and actually got off the train (after holding us up for a considerable amount of time.) Could you imagine any other religion in the United States expecting non-believers to accommodate them in such a way? It is a complete lack of adherence to Western norms, and it’s only going to get worse.

Today coincides with Eid al-Adha festival, and Muslims will begin praying around 5pm. The merciful Masrur Javed “M.J.” Khan, President of the Islamic Society of Greater Houston, assured reporters that evacuees would not be displaced or kicked out of the mosque so that Muslim patrons can pray tonight. Please note that for a city councilman and leader of all 20-area Houston mosques, there is absolutely zero information on Khan available anywhere.

While the news thought highlighting these stories would paint Muslims in a good light, it’s actually rather frightening that Muslims handle tragedies as a means to enforce Islamic supremacy on the vulnerable. It also makes you wonder why none of the white liberal evacuees asked to be transported to the mosques they so vehemently defend.