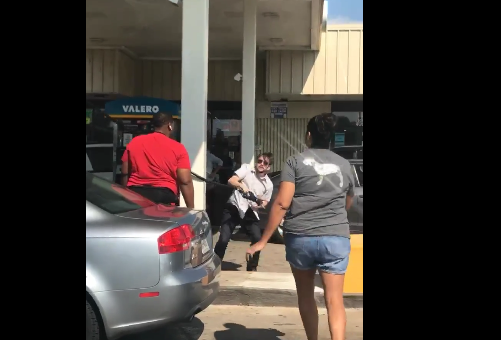 (INTELLIHUB) — Many physical altercations between Texans at the pumps following the gas shortage brought on by Hurricane Harvey’s devastation have gone unreported by the mainstream media and are expected to worsen as the crisis intensifies.

Right now, a number of Gulf Coast refineries remain crippled and crude shipments are not even making it to the refineries causing drivers further frustration as insiders have already reported 7 to 10-day waits on shipments.

One video clip shows a man pushing another man to the ground who is holding an active gas nozzle in his hand and trying to refuel his vehicle.

Warning: The following videos may contain graphic language and content.

Another video vshows two people again, arguing over gas. Except in this clip, one of the men involved in the altercation can be seen pouring gas into the other man’s vehicle as onlookers gasp.

Meanwhile, two men go toe-to-toe in a streetfight at a Dallas gas station.

And to think, we are only two days into the shortage.

Will the gas shortages, fights at the pumps, and violence get worse? #Texas #gasshortage

Will the gas shortages, fights at the pumps, and violence get worse? #Texas #gasshortage