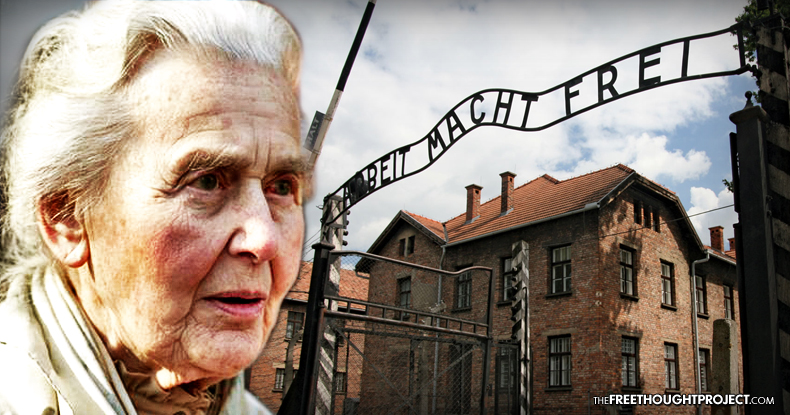 Revealing exactly why the U.S. Constitution’s First Amendment is so crucial, an 87-year-old woman was sentenced to 10-months in jail after being convicted of violating German hate speech laws after claiming that Jews were never exterminated in Auschwitz.

A court in Detmold on Friday sentenced Ursula Haverbeck to eight months in jail on charges of sedition. The presiding judge ruled out the possibility of parole and said that Haverbeck had a lack of “any kind of respect” and that she had made more offensive comments in the courtroom.

Haverbeck is expected to appeal against the sentencing. In Germany, anyone who publicly denies, endorses or plays down the extermination of Jews during Adolf Hitler’s regime can be sentenced to a maximum of five years in jail.

Haverbeck was found guilty of writing a letter to Detmold’s mayor, Rainer Heller, saying it was “clearly recognizable” that Auschwitz was nothing more than a labor camp. She wrote her message at the time when the Detmold court was trying Reinhold Hanning, a former guard who served at the Auschwitz concentration camp.

It should be noted that Ursula Haverbeck is well known for her extremist right-wing views, and has run afoul of German hate speech laws in the past—with courts having previously given her fines and another suspended sedition sentence, according to Fox News.

Just last year Haverbeck went on trial for proclaiming that the Holocaust was “the biggest and longest-lasting lie in history.” However, even if her speech is wrong and hateful, this woman, like everyone else, deserves not to be silenced.

Volksverhetzung, in English “incitement of the masses”, “instigation of the people”, is a concept in German criminal law that refers to incitement to hatred against segments of the population and refers to calls for violent or arbitrary measures against them, including assaults against the human dignity of others by insulting, maliciously maligning, or defaming segments of the population. It is often applied to, though not limited to, trials relating to Holocaust denial in Germany.

In the U.S., incitement of violence is criminal, but “assaults against human dignity of others by insulting, malicious maligning, or defaming segments of the population” are considered an exercise of free speech, and are protected under the First Amendment.

Essentially, German law has criminalized speech as a means of controlling political discourse—meaning the government will tell you what is acceptable to say, and who is fair game to malign.

For example, during Carnival in Germany political satire and fancy costumes are common themes, with many German cities holding float parades, of which many depict political themes. Floats maligning U.S President Donald Trump were common, and in one instance depicting him with a decapitated head held up high by the Statue of Liberty.

There were numerous other floats making fun of nationalist European leaders and right-wing parties. One float in Düsseldorf, showed President Trump standing next to a blond Hitler, along with France’s Marine Le Pen, and the Netherlands’ Geert Wilders.

For those that found the violent depiction of right-wing politicians objectionable, prominent German journalist Christian Thiels was quick to remind the public that, “It’s called ‘freedom of satire’. You don’t have to like it or find it tasteful but it is part of free speech.”

Yet, when the residents of the small German town of Bad Bergzabern attempted to mock Chancellor Angela Merkel and her refugee policy there was a starkly different response.

A non-political group of locals showed up with a float of German Chancellor Angela Merkel behind prison bars, with the caption: “This is how traitors end up.” Essentially, the German equivalent of the popular U.S election slogan used by many Trump supporters for Hillary Clinton: “Lock her up.”

The very next day a police complaint was filed, and police, along with the State Attorney of Landau district opened an investigation against the subversives who dared poke fun at Merkel.

Interestingly, the same German police and legal system that took weeks to open an investigation in the wake of mass sexual assaults in the city of Cologne on New Year’s Eve, and eventually closed most of the cases after a year-long investigation, immediately began a criminal investigation into the group of locals.

“The float showed the head of the Chancellor behind the prison bars. According to a police statement, by Tuesday many residents had complained about the float and a case had been filed. The State Attorney’s office in Landau is examining if the depiction of the Chancellor is a punishable offense.”

“The float was registered by a private group from South-Palatinate Kapellen-Drusweiler. The office-holders of the group told SWR that they do not belong to any right-wing group, and only wanted it to be a thought-provoking exercise.”

Before German law enforcement could make any assessments, the mayor’s office of Bad Bergzabern issued a statement that from now on, all Carnival floats were first to apply for mayoral approval.

While some speech may be extreme and repulsive, the prohibition on certain ideas, even the most repugnant, being put into the public marketplace of ideas is a fast track to totalitarian governmental control—essentially legitimizing the “thought police.”

“I disapprove of what you say, but I will defend to the death your right to say it.” — Hall in Friends of Voltaire

“Whoever fights monsters should see to it that in the process he does not become a monster. For when you gaze long enough into an abyss, the abyss will gaze back into you.” — Friedrich Nietzsche.