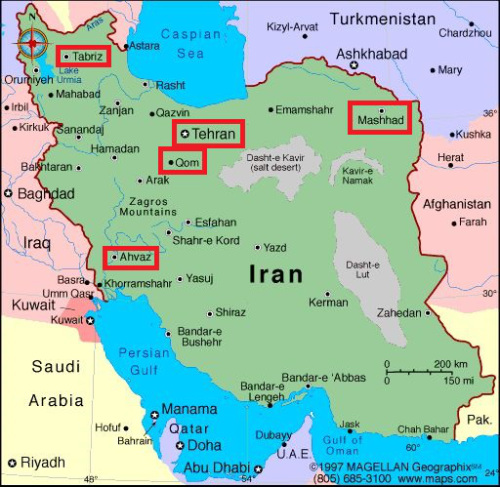 Something extraordinary and wondrous is happening in Iran.

It is the Light of Christ.

Mohabat News, the Iranian Christian News Agency, reports on August 11, 2017, that “Christianity has been growing at an exponential rate in the last couple of decades in Iran, causing the Islamic government a great deal of concern.”

Senior Islamic officials, such as Ayatollah Makarem Shirazi, one of the most senior Islamic Shi’ite clerics, repeatedly have expressed their concern over the spread of Christianity especially among young Iranians, including the son of an Islamic cleric. Other officials are:

The “high rate” of conversion of Iranian youth to Christianity is in spite of the government’s two fold plan to stop the spread of Christianity:

The first front is the allocation of millions of dollars for Islamic propaganda across the country and to support Islamic organizations that promote Islam among the youth within and without Iran’s borders, especially in cities such as Mashhad and Qom. Last year, after Ayatollah Makarem Shirazi expressed his deepest concern over the popularity of Christianity in the suburbs of Mashhad, the city’s religious and political officials immediately sent a vast number of Islamic teachers and preachers to Mashhad’s suburbs to turn the youth away from Christianity.

The second front is a crackdown campaign on newly converted Christians in order to plant fear in those who are interested in learning more about Christianity and possibly becoming Christians themselves. Young people who resist indoctrination and became Christian converts are arrested and harassed by the government’s law enforcement and intelligence ministry, and subjected to long term prison sentences and heavy bails for their temporary release. Churches, including house churches are disbanded. As examples, the government closed down the Central Assemblies of God (AOG) church and Janat Abad church in Tehran, and the AOG church in Ahwaz. Publication of anything related to Christianity or any material referring to Christianity is restricted, and books about Christianity already in the market are confiscated.

But the government has failed on both fronts — a failure that is obvious as Iranian Islamic authorities continue to express their concern over the rapid growth of Christianity in the country.

Another indicator of the failure of the government’s anti-Christian campaign is the “significant” increase in the number of house churches in Mashbad. Mashbad is the Islamic capital of not just Iran, but the Shi’ite Muslim world. Other Iranian cities with “a record number” of house churches are Tehran and Karaj.

One of Tehran’s imams said in an interview, “today Christians present their gospel to our youth in the most appealing way. They gather in many neighbourhoods across the city, including Bani Hashem neighbourhood (in Tehran) where tens of homes have been turned into house churches which evangelize their neighbours”.

Pray for the Christian converts of Iran!