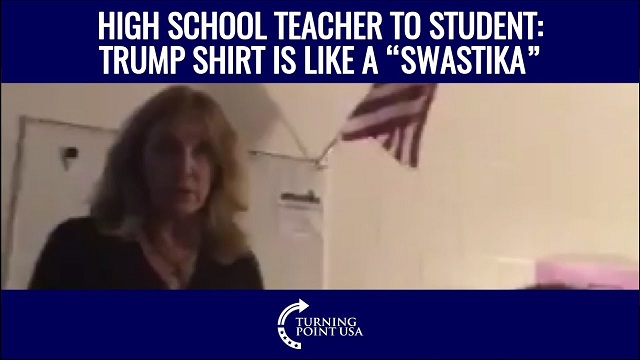 A high school teacher at River Ridge High School in Georgia was filmed kicking two students out of class for wearing “Make America Great Again” shirts, which she compared to wearing a swastika.

The video was obtained by Turning Point News and shared on their social media accounts Saturday. The teacher was identified as Lyn Orletsky. It reportedly happened on Thursday during her math class.

High school teacher calls Trump shirt a "swastika" and makes him take it off in class!

“You cannot wear a swastika to school,” Orletsky can be heard telling her students, “you cannot wear ‘Make America Great Again’ like that.”

“Please go, at least for this class,” she says. “I don’t care what you do in other classes.” “Wait so both of them have to like flip their shirts inside out because it says Trump on the top?” another student asks.

“Because it says ‘Make America Great Again,'” she responds. “The Neo-Nazis … I’m not saying about Trump, but the slogan.”

This is what math class is like in progressive America.

The school released a statement on the incident on Sunday:

On behalf of the Superintendent, this message is to provide you with more information about a story currently circulating in the media and on social media regarding an incident at one of our high schools.

In this regard, a River Ridge High School math teacher on Thursday, Aug. 31, 2017 erroneously told two students their shirts with campaign slogans were not permitted in class. Her actions were wrong, as the “Make America Great Again” shirts worn by the students are not a violation of our School District dress code. The teacher additionally — and inappropriately — shared her personal opinion about the campaign slogan during class.

The school’s Principal immediately met with and apologized to these students and their families. Superintendent of Schools Dr. Brian V. Hightower is deeply sorry that this incident happened in one of our schools; it does not reflect his expectation that all students be treated equally and respectfully by our employees.

While we cannot discuss disciplinary action against a teacher, we can assure you that the students face no disciplinary action. The Superintendent also is instructing all Principals to meet with their teachers and staff to review the dress code and remind them that their political opinions should not be shared with students.

As people across the country are being encouraged by some social media sites to contact the school, we anticipate a potentially high call volume over the next week. If possible, please avoid calling the front office during this time, and instead email the person you are trying to reach; emails are published on the school website at http://cherokeek12.net/riverridgehs/. A plan is in place to ensure staff will continue to be able to make outgoing calls without issues.

Thank you for entrusting us with your children each day. We care about them and their future success!

Incidentally, an individual on Twitter who claims to have been in the classroom when the incident went down says students are now wearing Trump gear to her class for the lulz:

Yeah, I was in the class when it happened.

She currently suspended and probably getting fired. Most people at that school are trump supporters.