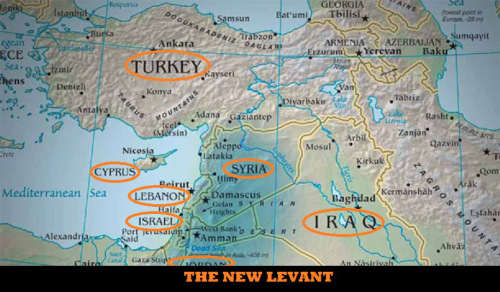 Have you, as I have, noticed how ISIS or the Islamic State are slaughtering Christians across the swath of the Middle East, but not Jews? Not even one?

According to a curious article on the website of the Arabic-language Egyptian newspaper, Egypt Independent, which was founded in 2011 and headquartered in Cairo, ISIS claims that their god Allah commands them not to fight Israel or Jews. Instead, ISIS’s immediate enemies and targets should be apostates — a word that variously means turncoat, heretic, atheist, or infidel. The article then makes a historical reference to how Saladin (1137-1193), the Sunni Muslim military commander, had fought Shiite Muslims first before capturing Jerusalem. The implication is that ISIS should focus on fighting fellow Muslims who are “apostates,” and conquering countries like Iraq and Syria.

Note: ISIS is the acronym for the Islamic State of Iraq and Syria. It has another acronym, ISIL, favored by Obama, which stands for Islamic State of Iraq and the Levant. (The Levant is a geographical term that in its widest historical sense included all of the countries along the eastern Mediterranean shores, extending from Greece to Cyrenaica. Today, Levant consists of the island of Cyprus, Israel, Jordan, Lebanon, Syria, Palestine, and part of southern Turkey.) Daesh is the acronym of the Arabic name for ISIL: al-Dawlah al-Islamīyah fī al-ʻIrāq wa-al-Shām.

Below is the Google translation (with some editing on my part to render it less gibberish) of the Arabic essay by Bassam Ramadan, “Daesh: Allah commands us not to fight Israel,” Egypt Independent, Sept. 7, 2014. I inserted the explanatory notes, colored teal.

He said the organization of the Islamic State in Iraq and the Levant (Daesh), Allah in the Qur’an commands us not to fight Israel or Jews, but fight the apostates and hypocrites

Daesh said in a tweet on the page used to publish data and information operations: “Question the Saudi people who defends Juggernaut. Does your country kill the apostate. Apostles and companions, Ashraf people ordered us to kill the apostate. (Note: Ashraf refers to someone who is a direct blood-line descendant from Muhammad by way of his daughter Fatimah.)

On questions about why Daesh does not fight Israel but will fight the people of Iraq and Syria, Daesh said in a separate tweet: “In the Qur’an, God speaks of the near enemy and the hypocrites as more dangerous than the original unbelievers. (Note: In the context of this essay, “original unbelievers” is a reference to Jews.) The answer was at Abu Bakr’s feet while fighting the apostates to open Jerusalem, which opened after the Umar bin al-Khattab. (Note: Abu Bakr was the father of Muhammad’s child-bride, Aisha, and a trusted advisor to Muhammad. Umar bin al-Khattab, who was hostile to Islam before his conversion, succeeded Abu Bakr as the second caliph.)

Daesh added that “The answer is seen in what Saladin and Nur ad-Din did. They fought Shiites in more than 50 battles in Egypt and Syria before Jerusalem. Saladin was told: ‘Fight Shiites, the Ubaydi state in Egypt, and leave the Roman Crusaders to occupy Jerusalem. Do not fight the Crusaders.’ (Note: Saladin was the first sultan of Egypt and Syria and the founder of the Ayyubid dynasty. A Sunni Muslim of Kurdish origin, Saladin led the Muslim military campaign against the Crusader states in the Levant. At the height of his power, his sultanate included Egypt, Syria, Upper Mesopotamia, the Hejaz, Yemen and other parts of North Africa.)

Daesh said: “Jerusalem will not be liberated until we get rid of these idols, the likes of Al Alinvtaiwih and all these families and pawns of [western] colonialism that controls the fate of the Muslim world.”

Of course, if ISIS is actually a creature of the CIA and the Mossad, as some claim — a claim that I have avoided looking into, dreading what I might uncover — then it’s a no-brainer why ISIS has not and will not fight Israel or Jews.