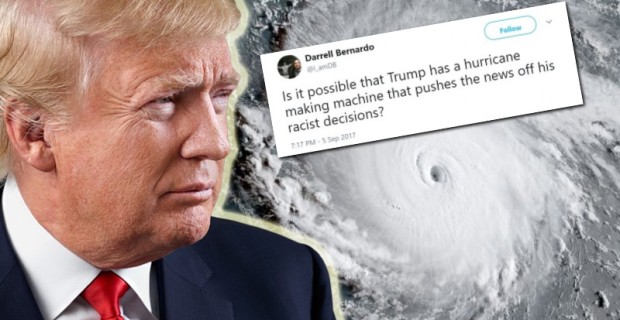 Just when you thought the hysteria couldn’t get any worse…

Trump Derangement Syndrome has worsened to the point where hysterical haters of the president are now seriously claiming that Trump is responsible for creating “racist” hurricanes.

“Hurricane Katrina, Hurricane Harvey, Hurricane Irma. The gov will manipulate the weather to exterminate blacks even if they have to kill whites, tweeted a writer for Complex.

“I can’t believe Trump’s sexist and racist headass is letting Irma and Jose run a hurricane train on America,” wrote one Twitter user.

“Is it possible that Trump has a hurricane making machine that pushes the news off his racist decisions?” asked Darrell Bernardo.

“So they say Hurricane Irma is headed for Miami. Did y’all realize 70% of Miami is Latino, Hispanic, or Cuban?? 44% of the Haitian population in the US resides in Miami. Miami is like Houston in which it is FLOURISHING economically. Coincidence? Trump wants them off our land so what better way than to flood them out. Read between the lines people,” she wrote.

After being completely ridiculed, Danielle subsequently claimed that she had “stated nothing but facts”.

While some claim the hurricanes are Trump’s fault, others merely accuse him of exploiting them as cover for his “racist” policies.

Another accused Trump of planning not to send aid to Puerto Rico, presumably because he hates brown people.

Meanwhile, some don’t seem to care too much about the origin of the hurricanes or any political ramifications, but just hope that they will kill Trump and his supporters.

Wasn’t life so much better before social media?