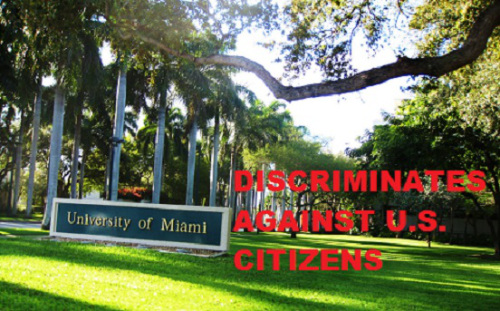 University of Miami (UM) is a private university of 16,848 students in 2015, and the 6th largest employer in Miami-Dade County. In 2017, U.S. News and World Report ranked UM as the 44th best national university in the United States.

Given the competitiveness of admissions, it is all the more outrageous that University of Miami is offering “Dreamers” — children who illegally entered the U.S. with their illegal alien parents — a full scholarship worth $62,000, as well as lower GPA and SAT standards.

Eduarto Neret reports for Campus Reform, Aug. 31, 2017, that University of Miami’s U Dreamers Program provides scholarships covering 100% of the “demonstrated financial need” of DACA students who reside in Florida, including tuition and fees, room and board, a meal plan, and student health insurance.

UM estimates that the total cost of attendance for an undergraduate student living on campus is slightly more than $66,000, of which at least $62,000 would be covered by the U Dreamers Program.

The Dreamer scholarship is “renewable for up to four academic years or such time [as is] required to complete the baccalaureate degree.”

DACA, or Deferred Action for Childhood Arrivals, is an unconstitutional Obama-era policy that protects from deportation illegal immigrants who were brought to the country as children, and also authorizes them to work in the United States.

To qualify for the renewable $62K Dreamers scholarship, one must:

The examples of UM students Andrea Cicilia and Natalie Telfeja make clear how discriminatory the university’s U Dreamers Program is against students who are U.S. citizens.

Cicilia told Campus Reform she wasn’t accepted to UM outright nor offered any scholarship money although she had a high school GPA higher than 3.2 and an ACT score of 25:

“It’s disappointing and unfair that UM would give full scholarships to DACA students, especially when they can qualify with a lower GPA and lower test scores than me. Would I qualify for a full scholarship as a citizen with a 3.2 GPA and 21 on the ACT? Probably not.”

“I consider myself lucky to have the partial scholarship that I have. It’s not fair that an undocumented student with a lower GPA could qualify for a full scholarship over someone like me. They are practically receiving preferential treatment for their immigration status.”