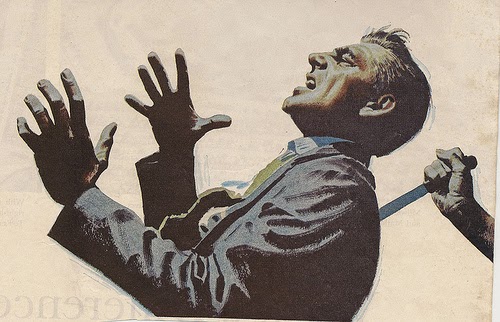 In numerous interviews and articles, including my essay ‘Globalist Strategy: Use Crazy Leftists And Provocateurs To Enrage/Demonize Conservatives‘, I have warned leftists that they are being exploited by globalists as a means to drive conservatives towards greater centralization under Trump and the federal government and that if they continue on the path they have embraced, a totalitarian response may be imminent.

I have also made it clear to conservatives that cultural Marxist groups like Antifa and Black Lives Matter as they exist today are paper tigers; they are not physically or strategically capable of backing up the viciousness of their ideologies. Meaning, a totalitarian response is not warranted (a totalitarian response is NEVER warranted) and would in fact only help the globalists in their long term efforts to destroy our Constitutional principles.

To summarize, the goal of the establishment is to use extreme leftist groups like a short stick to prod the real tiger — conservative movements. The goal, I believe, is to enrage liberty champions to the point that they are willing to “bend the rules” and rationalize the abandonment of their morals in order to defeat what they think is a great evil. Like all morally relativistic shifts in society, there is always the claim that it is for “the greater good of the greater number”, or, “the other side is much worse, therefore we are justified in our tyranny…”.

In the end, groups like Antifa will be thrown to the wolves, because the globalists do not intend for them to “win” any engagement with conservatives. This was never the plan.

If you want to measure the speed at which our nation is destabilizing under this agenda, it is helpful to watch how quickly government institutions and politicians abandon or turn on the leftists. The faster they do so, the more likely it is that a major crisis event is in the making.

In the past week alone, the entire narrative surrounding the mainstream relationship to Antifa has turned sour. For example:

According to documents obtained by Politico, the FBI and DHS have now officially classified Antifa as a terrorist group. The DHS has stated that these documents were not meant to be made public.

The mainstream media, the largest backers of cultural Marxist groups, must have received a memo, because their tune has quickly morphed to the negative when dealing with Antifa. The Washington Post chastised them for attacking “peaceful right-wing demonstrators” (did you EVER think you would see the words “peaceful right-wing protestors” in an establishment rag like The Washington Post?).

The Los Angeles Times also admonished far-left violence, while The Atlantic warned of the “rise of the violent left.”

Even crazed leftist zealot Nancy Pelosi has publicly turned against Antifa, stating that violent members should be “locked up.”

This is a rather fascinating 180-degree turn from a couple of weeks ago when all eyes were on “white nationalist” groups as the primary threat to America. But does this mean that the establishment did some soul searching and realized who the real purveyors of violence and conflict are? No, it does not.

As I have been predicting since before the 2016 elections, the left’s usefulness has a shelf life. If the establishment was interested in following through with the concept that Trump must be “unseated,” then they would retain full public support behind groups like Antifa. Instead, the establishment is playing the game of the hidden hand.

Right now,it would seem that Antifa groups are to take on the role of the underdog — the battered but still active insurgency against an “increasingly fascist regime.” A few events need to take place in order for this narrative to hold any weight in the national consciousness, however. For example, while globalists may back away from support of extreme leftists in public, they will most likely continue with private support and funding as men like George Soros have always done. Leftists will also have to be inspired to even greater violence than they have already committed.

As I discussed in my article ‘Militant Leftists Are More An Annoyance Than A Real Threat To Liberty’, published in May, regular Antifa protest organizations are not a true threat. That said, eventually there will be Antifa groups that are directly trained by government agencies to commit terrorist acts, much like The Weather Underground in the U.S. in the 1970s, or the controlled and well armed terror groups in Europe during Operation Gladio from the 1950s to the 1990s. In the end, all leftists will be associated with the actions of these false-flag groups.

In the meantime, the Trump administration is playing its part by preparing the ground for a future martial law-style crackdown. Trump’s latest executive measure? Bringing back Department of Defense program 1033, which funnels considerable amounts of surplus military hardware to police departments across America.

What happens next?  Well, in my view the next most logical step for the globalists would be to initiate an attack of some kind on a civilian or government target and ensure that leftists are involved or blamed.  With the fanaticism of the left today almost on par with the fanaticism of Islamic fundamentalists, I imagine it will not be very hard to find some useful idiots to carry out such an action.

Most likely attack scenarios in my view? Leftist terror groups supported covertly by governments have often gravitated towards bombings as their preferred method. On a larger scale, I would not rule out assassinations of politicians or even a FAILED assassination attempt on Donald Trump. These would be perfect triggers for a wider federal crackdown on leftists, fueling even greater animosity for Trump by progressives and providing a rationale for martial law for conservatives.

For some people uneducated on the finer points of false flag terrorism, this will sound like “conspiracy theory.” Some of it is indeed speculation on my part, but all of it is based on exposed programs of past high profile operations by various establishment entities to engineer civil unrest or to manipulate one part of a society to support more centralization and less freedom.

Leftist groups like Antifa are meant as a catalyst for this transition, much like their communist forebears were a catalyst for the rise of fascism in Italy in the early 1920’s. They will not be the only mechanism, but they will be an important mechanism. As we witness the mainstream turning on the extreme left, the temptation will be to assume victory — that we have won and that the fighting will soon be over. Nothing could be further from reality. Antifa is not going away, it is merely changing into something worse; something more useful to globalists like Soros. If we find ourselves distracted from Constitutionalism and our pursuit of the globalists by this new and more violent incarnation, it will be conservatives, not leftists, that will end up becoming the pinnacle threat to our own ideals.