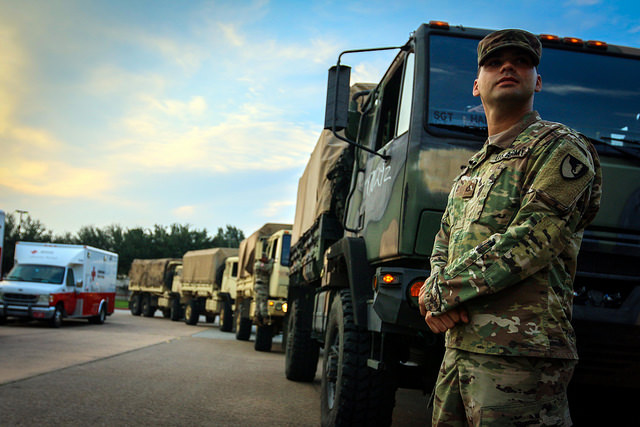 HOUSTON, Tex. (INTELLIHUB) — Anna Khait, Brian Richmond, and other volunteer rescue workers helped to hand out emergency food and supply kits to hundreds of people who were displaced by Hurricane Harvey’s devastating winds and floodwaters offering the group an opportunity to traverse various parts of the city during their efforts where they claim that both the Red Cross and FEMA were virtually “nowhere to be seen.”

“Red Cross was nowhere to be seen,” Khait explained on a recent Leak Project videocast hosted by Rex Bear. “You didn’t see Red Cross out there [at all].”

Khait and Richmond told Bear that FEMA’s presence was lacking as well which begs the following question: Where in the hell is all of the disaster money going?

To put it all in perspective, the CEO of Red Cross Gale McGovern appeared on CBS News last week where she explained that 91% of the donations that the Red Cross receives goes to “Red Cross services.” Whatever that means.

“Like I said, on average ninety-one percent goes to our services,” the CEO said. “I am very proud of the fact that we are good stewards of our donors’ dollars.”

So what else did Richmond and Khait encounter in Houston after Harvey hit?

Khait told Leak Project that during the crisis their group was “armed up the butt” and was prepared to deal with any situation in which they may have encountered but realized in retrospect just how dangerous and intense those few days really were.

Richmond said at one point they were in a strip mall with a heavy National Guard and State Police presence where they were asked if they would be willing to run private security.

“The police actually inquired with us to be a private citizen security team on the ground there,” he said. “Even with of that police and National Guard presence in that small strip mall they were still wanting more armed security and they were inquiring with me because we had small arms.”

On a good note, Richmond said that their team planned the “citizen” operation so well that in most cases people wouldn’t even have to exit their vehicle to be loaded up with food and other goods they needed.

Shepherd Ambellas is an opinion journalist, analyst, and the founder and editor-in-chief of Intellihub News & Politics (Intellihub.com). Shepard is also known for producing Shade: The Motion Picture (2013) and appearing on Travel Channel’s America Declassified (2013). Shepard is a regular contributor to Infowars. Read more from Shep’s World. Follow Shep on Facebook and Twitter.