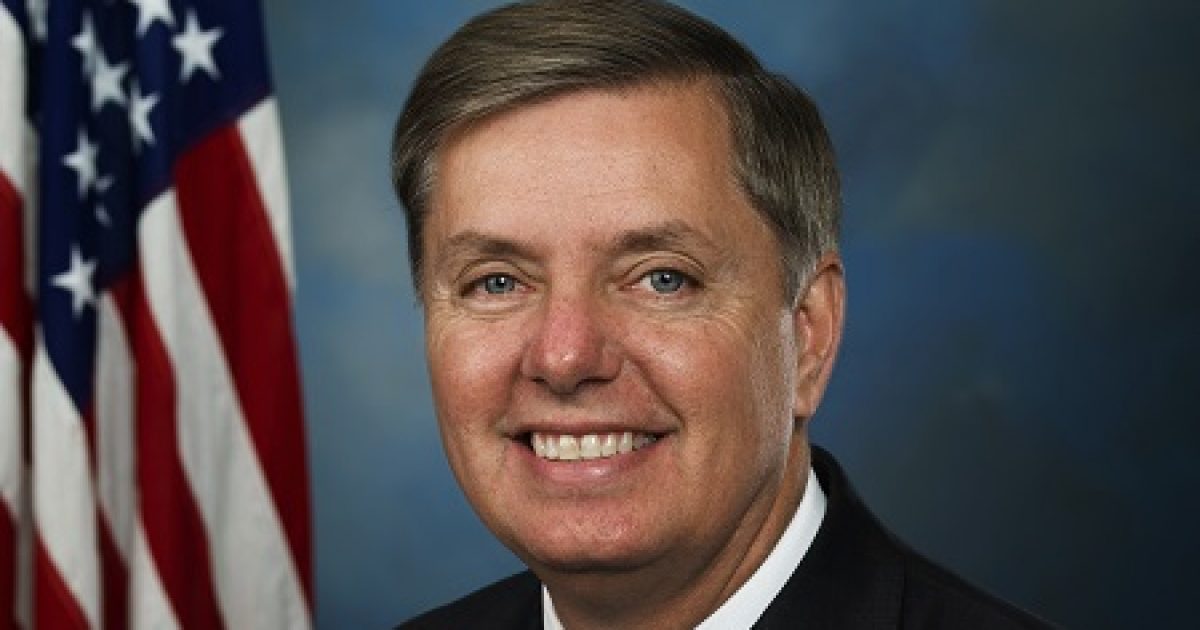 It is thus: Thou shalt not speak ill of any fellow Republican.

Yet, for the enticing glow of a TV camera

—and the gotcha questions of a liberal interviewer—he will say just about anything:

“[Attorney General] Jeff Sessions is wrong. These kids are not taking jobs from American citizens, they’re part of our country.”

By any legal definition, citizens make up America; this is true of every sovereign nation on earth.

As Sen. Graham received his J.D. from the University of South Carolina in 1981, one would assume he comprehends the distinction.

After all, the law is unambiguous: either one resides stateside legitimately, or not.

Only one who slept through law school could possibly take the position that AG Sessions is incorrect regarding the “Dreamers.”

Such rule breaking is the purvey of emperors or would-be kings: never any Constitution-respecting U.S. president (like Trump).

In fact, Mr. Graham should be incensed that his lawmaking role had been so roguishly usurped by DACA: not defending the undeserving recipients of this ultra-constitutional farce.

Given Mr. Graham’s inexplicable attitude, isn’t it disconcerting that this senior senator has been a member of Congress for more than two decades?

In all that time, why hasn’t his ilk resolved the illegal migration problem?

Moreover, rather then taking Mr. Obama to task for creating this immigration mess, Mr. Graham publicly criticizes a member of his own party for following the spirit, and the letter, of the law?

Why do so many prominent Republicans like he, John McCain (R-AZ) and Majority Leader Mitch McConnell (R-KY)—indigenous Washington “swamp” creatures one and all—defend their do-nothing status quo?

At every turn, it seems, they offer nothing more than full-throated excuses such as, laughably, McConnell’s:

“Our new president, of course, has not been in this line of work before, and I think had excessive expectations about how quickly things happen in the Democratic process.”

Therefore, one can understand why the can-do attitude of a results-driven, private sector capitalist would challenge the bureaucratic intricacies of government that lifelong politicians hide behind.

Consequently, a main reason why President Trump was elected: to “shake things up” that badly need it!

Insanely, these RINOs (Republicans In Name Only) undermine him and the agenda that he—and they—were elected upon! Why are they indistinguishable from their truth afflicted Democratic counterparts?

Once again, Mr. Graham is mistaken when he, as Democrats, blithely claims that “Dreamers” are not siphoning resources—and opportunities—that should be reserved for U.S. citizens.

Indeed, how can this “leader” ignore the negative impacts of the undocumented?

One telling example is taxpayer funded public school education. Per the National Center for Educational Statistics:

“Total expenditures for public elementary and secondary schools in the United States in 2013–14 amounted to $634 billion, or $12,509 per public school student enrolled in the fall (in constant 2015–16 dollars).”

For context, per Pew Center statistics, some 11 million illegals reside in the United States.

Furthermore, related to employment, Pew Hispanic Center puts the number of illegal aliens in the workforce at 8 million.

According to the Bureau of Labor Statistics, the median wage for full-time workers in the United States in the final quarter of 2016 was $44,148 per year.

How’s that not taking by foreign squatters from the fiscally abused taxpayers who also pay Lindsey Graham’s yearly salary of $174,000?

Is he just insulated or completely obtuse?

After more than seven and a half months of GOP inaction and broken promises (read: Obamacare repeal) what’s clear is that RINOs, as he, care nothing about their ill-used constituents. You know, the voters who elevated his kind to majorities in Congress. So, why the utter disconnect by the upper echelon of the Republican Party?

It turns out these folks have a political syndrome akin to Jan Brady’s Marcia envy.

For those unfamiliar with the sitcom “The Brady Bunch

” (1969-1974), Jan was her family’s insecure loner, the often marginalized middle child to her popular paragon of an older sister.

Like Jan, RINOs desperately want to be liked—above all else! Ironically, by the Trump-hating liberal clique that is the MSM.

However, the press is populated by propagandist “mean girls” unwilling to lavish the same slavish devotion they habitually bestow on Democrats.

Specifically, that Lindsey Graham wrongly sees the offspring of lawbreakers as part of our societal fabric is inconsistent with immigration law—and the will of American patriots.

How then can he also support funding Trump’s southern border wall?

To play both sides of an issue by subtly pandering—to go as the political winds dictate—typifies gelatinous RINOs, and polarizing liberals.

Thanks to ongoing media spin, the electorate is likely to ignore Democrats’ many untruths, but they will expose the GOP’s lack of legislative accomplishments.

At this rate, Mr. Graham will likely find himself, and his party, consigned to the minority after the 2018 midterm elections.

Rather than embracing the daily opportunities to follow Trump’s lead, this fork-tongued backbencher will find himself returned there.

Still, a cushy office, a six-figure salary, and the trappings of power are nice booby prizes.

That’s certainly enough to build the flagging self-esteem of the Jan Bradys of the world, anyway.

But, if Sen. Graham wants to truly be a winner—like Marcia Brady, Donald Trump and Ronald Reagan—he needs to relentlessly champion conservatism via the priorities set forth by this president forthwith.

To that end, focusing on the concerns of his fellow citizens—rather than parroting the bleeding heart narratives of the left—would be a vast improvement.

In the final analysis, being an ineffectual RINO fosters scorn and mistrust from every corner.

It guarantees failure: no matter which side Lindsey Graham finds himself on.

David is an Associate Editor of “Capitol Hill Outsider.” He is a widely published DC-based writer of political commentary. He has a Master’s in Professional Writing from USC.