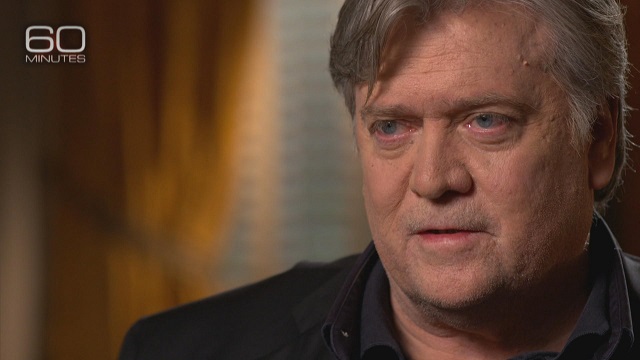 Steve Bannon gave a wide-ranging, must watch interview to 60 Minutes which aired Sunday.

Politico accurately ranked Bannon number one on their political movers and shakers listearly this week and this interview makes it clear why it’s much deserved. Stephen Bannon is the only “mainstream” figure other than Donald Trump who represents anything real.

The most interesting part is where Bannon says Trump embraced the establishment at the beginning of his presidency for the sake of practicality so he could staff a government and attempt to govern.

[Note: The embed on the first video is broken because CBS is incompetent.]

Even though the interview is heavily edited, it’s somewhat excusable as it’s around 26 minutes. They have a few extras on their website.

It’s really past time these news organizations start releasing their full, unedited interviews online. Nonetheless, the best extra is where he says the Democrats need a civil war in their party because they have “no Breitbart” that is actually challenging the establishment crooks who run their party. As he notes, Bernie Sanders was too cowardly to challenge Hillary Clinton and the donor class and hacks like Rachel Maddow are nothing but establishment shills.

It’s a serious issue as their party is a fractured coalition held together only by hatred for pure-Americana Americans and all they represent.

Former White House chief strategist Steve Bannon, during his brief tenure in the West Wing and his few months as CEO of President Trump’s campaign, earned many nicknames among his admirers and his ever-expanding list of enemies. He was the “great manipulator,” “Trump’s Svengali,” “the Grim Reaper,” “Propagandist-in-chief.”

He describes himself as a “streetfighter.” And he proved it in this, his first-ever television interview. Bannon is back running Breitbart News — the website where the alt-right and conspiracy theories meet conventional conservatives. The streetfighter, shiv-in-hand came ready to brawl, and not with liberals or Democrats.

STEVE BANNON: The Republican establishment is trying to nullify the 2016 election. That’s a brutal fact we have to face.

STEVE BANNON: I think Mitch McConnell, and to a degree, Paul Ryan. They do not want Donald Trump’s populist, economic nationalist agenda to be implemented. It’s very obvious. It’s obvious as– it’s obvious as the– it’s obvious as night follows day is what they’re trying to do–

CHARLIE ROSE: Give me a story that illustrates that.

“In the 48 hours after we won, there’s a fundamental decision that was made. You might call it the original sin of the administration. We embraced the establishment.”STEVE BANNON: Oh, Mitch McConnell when we first met him, I mean, he was– he was– he– he said, I think in one of the first meetings– in Trump Tower with the president– as we’re wrapping up, he basically says, “I don’t wanna hear any more of this ‘Drain the Swamp’ talk.” He says, “I can’t– I can’t hire any smart people,” because everybody’s all over him for reporting requirements and– and the pay, et cetera, and the scrutiny. You know, “You gotta back off that.” The “Drain the Swamp” thing was– is Mitch McConnell was Day One did not wanna– did not wanna go there. Wanted us to back off.