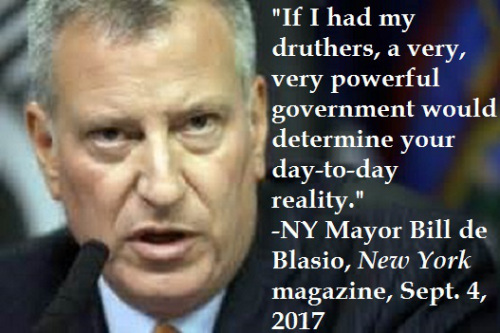 By that measure, New York mayor Bill de Blasio, aka Warren Wilhelm Jr., is through and through a communist.

In the New York interview, claiming to speak for “people all over this city,” de Blasio railed against the institution of private property. He said that “if I had my druthers,” America would be a totalitarian state (“a very, very powerful government, including a federal government”) wielding total power over every facet of people’s lives ( “involved in directly addressing their day-to-day reality”) in accordance with the communist dictum of “in accordance to their needs”. At the city level, the totalitarian state would “determine which building goes where, who gets to live it, what the rent will be”.

These are his words:

“What’s been hardest is the way our legal system is structured to favor private property. I think people all over this city, of every background, would like to have the city government be able to determine which building goes where, how high it will be, who gets to live in it, what the rent will be. I think there’s a socialistic impulse, which I hear every day, in every kind of community, that they would like things to be planned in accordance to their needs. And I would, too. Unfortunately, what stands in the way of that is hundreds of years of history that have elevated property rights and wealth to the point that that’s the reality that calls the tune on a lot of development. […]

Look, if I had my druthers, the city government would determine every single plot of land, how development would proceed. And there would be very stringent requirements around income levels and rents. That’s a world I’d love to see, and I think what we have, in this city at least, are people who would love to have the New Deal back, on one level. They’d love to have a very, very powerful government, including a federal government, involved in directly addressing their day-to-day reality.

In the meantime, before he could have his druthers as a totalitarian mayor of New York City, de Blasio prides himself on having implemented little socialist “fixes,” such as:

What de Blasio the communist neglected to say in his interview is that he himself is “the wealthy,” with an estimated net worth of $1.5 million.