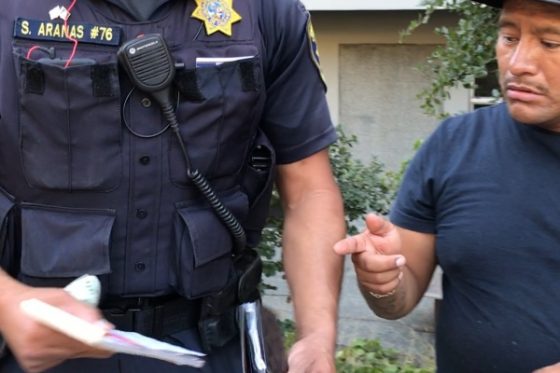 Thousands of people have donated tens of thousands of dollars to the hot dog vendor who had his earnings stolen from him by the police. Hot dog vendor Juan’s wallet was taken and the campus cop helped himself to some the vendor’s hard earned money for the crime of selling hot dogs with out first paying to obtain permission from the government to do so.

Cop apologists feel that theft of this man was the “right thing to do” because Juan was operating his business without a license. Customer Martin Flores was buying hot dogs outside this Saturday’s UC Berkeley football game when his purchase was interrupted by the police. That’s when Flores started recording the now viral incident on his cell phone.

The cop can be heard saying “this is law and order in action.” To most, it appears like a scene straight of 1940’s East Berlin. And witnesses and those who watched the video appeared to agree.

The next morning, Flores started a GoFundMe page to help the vendor with “personal, legal and professional matters.” He called the campaign “OfficialJustice4Juan&StreetVendors.” The campaign was set to raise $10,000 to help Juan, and “to cover other vendors who have been robbed of their hard earned living through citations and the removal of their carts.” As of now, it’s raised over $56,000 and it is continuing to rise quickly.

Apparently, that thin blue line is thinning even more.

The University of California Police Department has also responded to the video, with spokeswoman Sgt. Sabrina Reich stating the $60 was “seized as suspected proceeds of the violation and booked into evidence.”

She also said that three other people were detained by campus police on charges of vending without a license, Berkeleyside reports. They, however, were released with a warning and not ticketed and their compensation for selling was not stolen by the police.

If cops have ever wondered why they have such horrible relations with the public, look no further than this incident. And based on the amount of money this GoFundMe campaign has already raised, many are siding with Juan.

*Follow this link to donate to Juan, the hot dog vendor.*