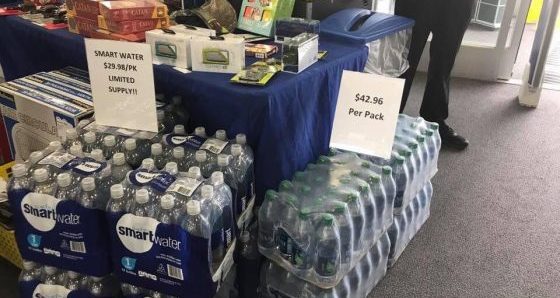 Stranded Hurricane Irma refugees are calling out the “happiest place on Earth” for price gouging in the wake of the monstrous storm. Those who are staying at Disney World are accusing the establishment of jacking up the prices of water to insane levels to profit off of the misfortune of others.

This isn’t the first time a company has been caught price gouging after a storm has ravaged an area. Although Best Buy has apologized for charging over $42 for a case water, many are not quickly forgiving. A case of bottled water priced at nearly $43 at a Best Buy store outside storm-ravaged Houston was a “big mistake,” according to the retailer, with the incident sparking a social media outrage and shining a spotlight on price gouging in the wake of Hurricane Harvey. The backlash was swift.

And it’s unlikely Disney World will be treated any differently than the embattled Best Buy. Disney’s Art of Animation Resort in Lake Buena Vista, Florida, marked up their food and beverage prices during Hurricane Irma in what a spokesperson for the brand told The Street is an “isolated situation.” Small bottles of Dasani water were being sold for $2, Minute Maid apple juice boxes were $2.69, and there was even allegedly a hamburger being sold for $15. The “happiest place on Earth” simply chalked it up to an “over-anxious cast member” and corrected the issue by offering a menu of food and beverage deals for $6.

Companies should be able to charge whatever they want for business services and wares sold – which includes food and water. That’s exactly how the economic rule of supply and demand works. But these companies shouldn’t be hypocritical about it and pretend they care at all about the victims of these storms now suffering and scrapping to get by on what little they have left. Just pull out the honesty card and admit it was a money making opportunity. People won’t forgive either way, but at least there’d be some truth out there.