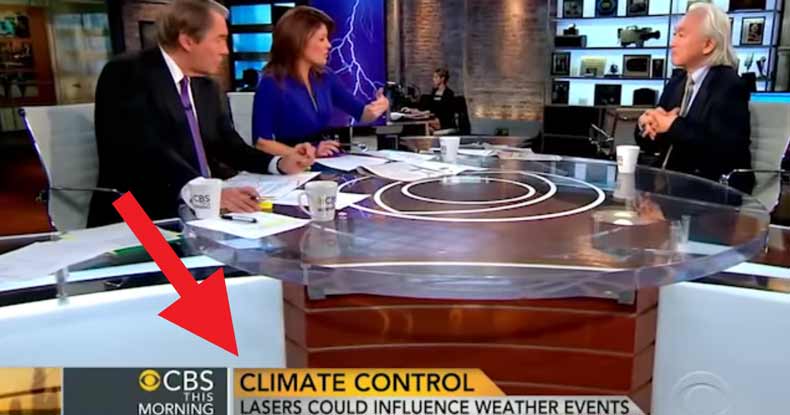 In the aftermath of the devastation wrought by Hurricane Harvey and Hurricane Irma, and Hurricane Jose brewing in the Atlantic, many people are looking for answers as to the increasingly volatile weather being witnessed.

And while climate change is one potential cause, there are other lesser known activities that could potentially be playing a role in the manifestation of these weather anomalies.

While weather modification and geo-engineering are still somewhat taboo subjects to the mainstream, often considered to be in the realm of conspiracy theory, there is a significant body of academic research and science that confirms that these technologies not only exist but are being operationalized.

No, the Free Thought Project is not claiming the government, nor anyone else is making hurricanes or actively controlling the weather. We are only presenting this information because it exists and people should be aware that it exists.

In a segment aired on CBS in 2013, respected scientist Dr. Michio Kaku, a physics professor at City College of New York, discussed – with Charlie Rose and Norah O’Donnell – the science of weather manipulation.

During the interview Kaku, in discussing the experiments with weather modification notes that “We’re shooting trillion watt lasers into the sky,” referencing the use of lasers to induce changes to naturally occurring weather phenomena.

Later in the conversation, Kaku briefly touches on the history of weather modification that has been carried out for decades by the government – with the CBS hosts quickly interrupting him to note these programs were only “alleged.”

Of course, these hosts must be ignorant of the declassified history of “Operation Popeye,” which was a weather manipulation program enacted during the Vietnam War as a means of creating ongoing monsoon conditions in an effort to impeded the Viet Cong’s mobility in the region.

This is no “conspiracy theory.”

In fact, research published in the Proceedings of the National Academy of Sciences specifically notes that laser beams create plasma channels in air, which in turn, cause ice to form.

Professor Jean-Pierre Wolf and Dr. Jerome Kasparian, both biophotonics experts at the University of Geneva, actually organized a conference at the World Meteorological Organization to discuss how powerful laser pulses can be used to generate changes in the atmosphere that influence the weather.

“Under the conditions of a typical storm cloud, in which ice and supercooled water coexist, no direct influence of the plasma channels on ice formation or precipitation processes could be detected.

“Under conditions typical for thin cirrus ice clouds, however, the plasma channels induced a surprisingly strong effect of ice multiplication.

“Within a few minutes, the laser action led to a strong enhancement of the total ice particle number density in the chamber by up to a factor of 100, even though only a 10−9 fraction of the chamber volume was exposed to the plasma channels.

Adding credence to the idea of scientists using geo-engineering technology to manipulate the weather, according to the MIT Technology Review:

A pair of Harvard climate scientists are preparing small-scale atmospheric experiments that could offer insights into the feasibility and risks of deliberately altering the climate to ease global warming.

They would be among the earliest official geoengineering-related experiments conducted outside of a controlled laboratory or computer model, underscoring the growing sense of urgency among scientists to begin seriously studying the possibility as the threat of climate change mounts.

Sometime next year, Harvard professors David Keith and Frank Keutsch hope to launch a high-altitude balloon, tethered to a gondola equipped with propellers and sensors, from a site in Tucson, Arizona. After initial engineering tests, the “StratoCruiser” would spray a fine mist of materials such as sulfur dioxide, alumina, or calcium carbonate into the stratosphere. The sensors would then measure the reflectivity of the particles, the degree to which they disperse or coalesce, and the way they interact with other compounds in the atmosphere.

Another top American climate researcher – Professor Alan Robock from Rutgers – says that the CIA is looking into weather modification as a form of warfare.

As reported in The Independent:

A senior American climate scientist has spoken of the fear he experienced when US intelligence services apparently asked him about the possibility of weaponising the weather as a major report on geo-engineering is to be published this week.

Professor Alan Robock stated that three years ago, two men claiming to be from the CIA had called him to ask whether experts would be able to tell if hostile forces had begun manipulating the US’s weather, though he suspected the purpose of the call was to find out if American forces could meddle with other countries’ climates instead.

During a debate on the use of geo-engineering to combat climate change, at the annual meeting of the American Association for the Advancement of Science in San Jose, California, Prof Robock said: “I got a phone call from two men who said we work as consultants for the CIA and we’d like to know if some other country was controlling our climate, would we know about it?

“I told them, after thinking a little bit, that we probably would because if you put enough material in the atmosphere to reflect sunlight we would be able to detect it and see the equipment that was putting it up there.

“At the same time I thought they were probably also interested in if we could control somebody else’s climate, could they detect it?”

Professor Robock, who has investigated the potential risks and benefits of using stratospheric particles to simulate the climate-changing effects of volcanic eruptions, said he felt “scared” when the approach was made.

“I’d learned of lots of other things the CIA had done that haven’t followed the rules and I thought that wasn’t how I wanted my tax money spent. I think this research has to be in the open and international so there isn’t any question of it being used for hostile purposes.”

Professor Robock’s concerns come as a major report on geo-engineering is to be published this week by the US National Academy of Sciences. Among the report’s list of sponsors is the “US intelligence community”, which includes Nasa, the National Oceanic and Atmospheric Administration, and the US Department of Energy.

The professor alleges that the CIA told a colleague of his that it wanted to fund the report, but claimed that it did not want this fact to be too obvious – he added that the CIA is “a major funder” of the report which “makes me really worried about who is going to be in control”.

He claimed the US government had a proven history of using the weather in a hostile way, citing the action of seeding clouds during the Vietnam War to muddy the Ho Chi Minh foot-trail and attempt to cut it off, as it was used as a supply route but the north Vietnamese.

He claimed the CIA had also seeded clouds over Cuba “to make it rain and ruin the sugar harvest”.

While certain powerful constituencies are well aware of the extremely powerful forces that can be unleased through weather modification technology, these same groups would like to keep the general public unaware of these technologies and programs.

Whether these recent weather phenomena may, or may not, have anything to do with weather manipulation technology, make no mistake that weather modification is a real and practiced science – and is no conspiracy theory.