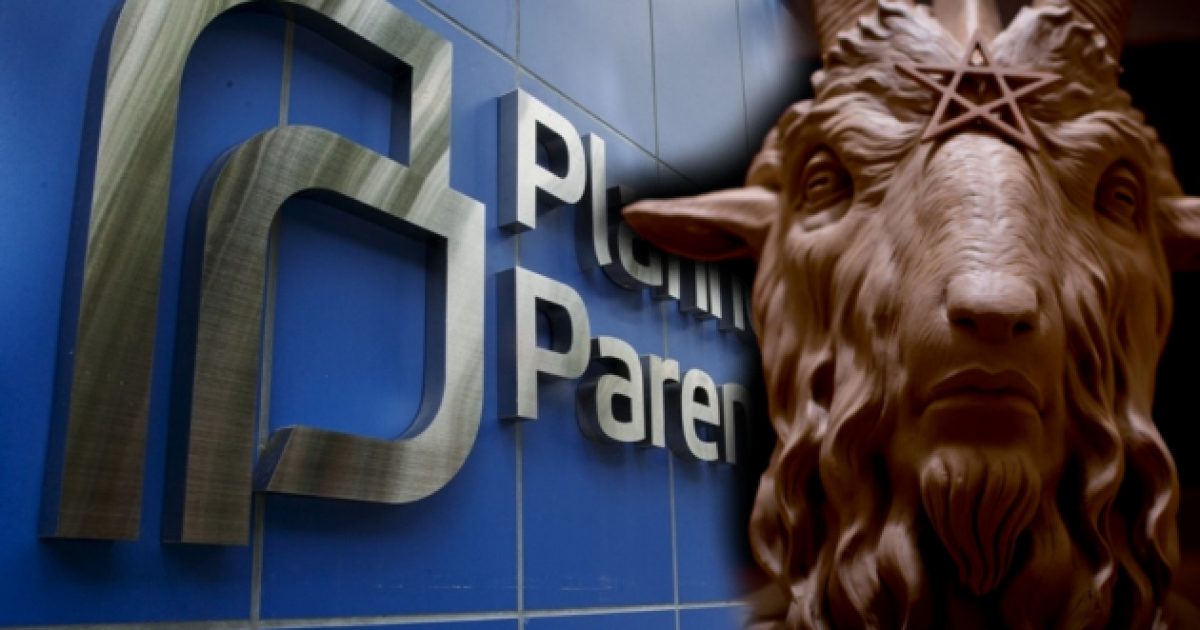 Ye are of your father the devil, and the lusts of your father ye will do. He was a murderer from the beginning, and abode not in the truth, because there is no truth in him. When he speaketh a lie, he speaketh of his own: for he is a liar, and the father of it. And because I tell you the truth, ye believe me not. -John 8:44-45

It’s no surprise for the discerning person that Baby murder mill Planned Parenthood and Satanists are now teaming up in Missouri to promote the practice of child murder through abortion.

Why is it no surprise? Because they both have the same father, the devil (John 8:44-45). I’ll predict you’ll see all sorts of anti-Christs join hands with them too and demonstrate who their father is as well.

Missouri has reportedly doubled its abortion capacity this year “thanks to the Satanic Temple and Planned Parenthood,” who have worked in tandem to fight the state’s restrictions on abortion.

With some of the most clearly defined regulations on abortion in the nation, Missouri had managed to lower the number of abortion facilities to a single clinic, but a second Missouri clinic opened its doors recently and two others plan on following soon.

Planned Parenthood has battled against state regulations requiring abortion clinics to meet the same surgical center standards as full hospitals and for their doctors to have hospital privileges, and in April a federal court sided with the abortion giant.

U.S. District Judge Howard Sachs granted a preliminary injunction invalidating requirements for the state’s abortion clinics to meet standards for surgical centers and for their doctors to have hospital privileges, citing a U.S. Supreme Court ruling striking down similar restrictions in Texas, which deemed those laws unnecessary and unconstitutional.

“Missouri has not complied with that decision,” Sachs, of the Western District of Missouri in Kansas City, wrote.

First, for anyone wanting to claim there is such a thing as a “safe and legal” abortion notice that Planned Parenthood has fought to even keep you safe in an abortion clinic, should you choose to use their services.

They have openly pushed to make things as cheap and unsafe as possible by not wanting to be held to surgical center standards.

Women, this should concern you, and then on top of that it should concern those thinking of dismembering and murdering their children while in the womb.

If Planned Parenthood cares this little about your own health and safety, how much do they care for that little life growing inside you? Oh, they value it at about $200, or 30 pieces of silver if you are Judas.

After Planned Parenthood announced it would open up two more abortion clinics in Missouri, the Satanic Temple made a very telling argument before a Missouri court.

According to Breitbart, the group argued that the “state’s abortion restrictions violate members’ rights to free religious practice.”

The group claims that the religious violation is one of intellect, saying that they hold a high regard for rational, independent thought, which they really don’t, and that forcing Satanists to read anti-abortion literature and waiting between consultations is a violation of their right of religion.

There are several problems with the argument, but some I actually agree with.

The first problem is that Satanic worship is not protected under the First Amendment. Anyone with any understanding of the history and time of the writing of the Constitution would know that no one signing that document had in mind protecting Satanism. In fact, numerous state laws would have dealt severely with those who engaged in such practices.

While they should have learned from history and been more careful and used the term “Christianity” instead of religion, history would support that notion far better than agreeing that Satanism should be protected.

Second, there is no constitutionally protected right to murder your unborn child. That’s so plain and simple it’s not even arguable.

However, on the issue of forcing people to jump through hoops and forcing them to read literature, I wholeheartedly agree with them. However, these are the attempts of people who will not push for outright abolition of abortion, of which Oklahoma gubernatorial candidate Dan Fisher is doing.

If Missouri pro-lifers would actually call for abolishing abortion instead of regulating it little by little, this would come to a swift end and punishment for engaging in the murder of the innocent would be the justice dispensed, not tolerance and certainly not the cry of victimhood that I heard from pro-lifers in 2016 after then candidate Donald Trump said that a mother who had an abortion should face punishment.

It’s interesting how so many of these people say they don’t want a theocracy when it comes to the God of the Bible laying down His law for society, but look how they push a theocracy when their god dictates it so.

I’ve heard it time and again, and sadly from professing Christians, “We are not a theocracy.” Oh yes, we are! As such, the god of the society dictates the laws of the society. If Christian, the Bible and the Law of God; if Islam, the Koran and Sharia; if humanism, the corrupt mentalities of fallen men; etc.

While many may call my claims that the people of these two organizations have the same father because they are engaged in the same practice, namely murder of their own children, the Bible pinned this tail on the proverbial donkey thousands of years ago.

They have built also the high places of Baal, to burn their sons with fire for burnt offerings unto Baal, which I commanded not, nor spake it, neither came it into my mind: -Jeremiah 19:5

Baal is none other than Beezebul, whom Jesus the Christ referred to as Satan.

If you’re looking for devil worship, just think of it as nothing more than self-worship, after all, the true Satanists won’t talk about things like blood rituals and such. Instead, what they promote is what the 19th-20th century Satanist Aleister Crowley

said, “Do what thou wilt, shall be the whole of the law.”

Sadly, this doesn’t just apply to Planned Parenthood and Satanists, but to those even within the Church who live their lives apart from the law of God and instead become a law unto themselves doing whatever is right in their own eyes. If you are doing such a thing, you are not demonstrating that your father is God. Quite the opposite.